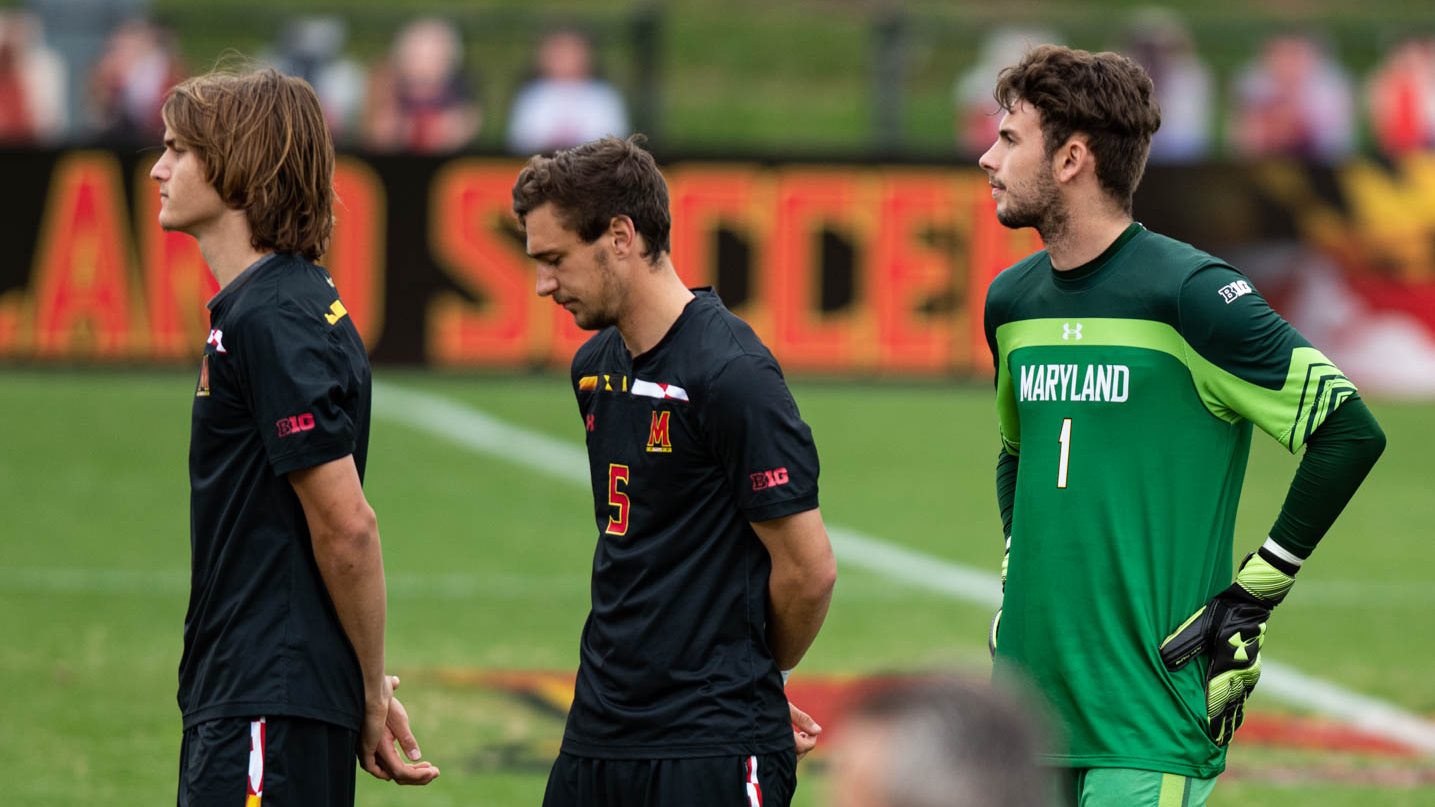 Kris Shakes’ first mistake was getting caught off his line. Justin Gielen had whipped a ball into the box, right onto the outstretched boot of Ben Bender.

Shakes, meanwhile, was caught between Bender and the net, not close enough to block the shot and too far from the goal to tip it out of bounds.

Instead, as Bender sliced his shot into the turf and looped it over Shakes’ head, all the Penn State goalie could do was leap and hope to get a fingertip on the ball.

And the 5-foot-11 goalkeeper did. But the ball spun off his flailing hand, off the bar and right onto Bender’s head, who knocked it home for a goal within two minutes.

Shakes’ second-minute blunder, though, stood as an outlier, the one goalkeeping lapse in a game defined by big plays from the men between the sticks.

“A couple times I swear I thought the game was over, but he got in the way,” Gielen said.

Ending with a 2-2 scoreline, Maryland men’s soccer’s matchup against Penn State was full of big saves and special moments from goalkeepers. Bender’s early goal notwithstanding, both keepers were crucial for their respective teams, especially down the stretch of a tight Big Ten encounter.

And, in overtime — with the golden goal rule in play — the goalies seemed to up their performance.

There was a dramatic one-on-one save from Maryland keeper Jamie Lowell to prevent a golden goal winner. Another from Lowell, eight minutes later, denied Andrew Privett at the death of the first overtime.

“I was happy for a young keeper, Jamie, to come in and make a play like he did in that game,” coach Sasho Cirovski said.

Then, it was Shakes’ turn. As Maryland pushed for a winner in the second overtime, he rushed out to disorient Brayan Padilla on a shot from three yards out — swiftly snagging the deflected strike. Moments later, he added another impressive save to his growing highlight reel, diving to block an acrobatic volley from Paul Bin.

“Well-taken shot by Paul. That’s the kind of save that you want your keepers to make,” Cirovski said.

[“A beautiful game”: Soccer has provided reflection and comfort for Isaac Ngobu]

In reality, the 2-2 scoreline could have been far uglier before the teams even reached overtime. Shakes kept Penn State in it early, shielding a stinging shot from Bender just minutes after the opening goal.

He went one better in the second half. The Terps were awarded a penalty after Jalen Watson shoved Bin in the box. Bin stepped up to take the spot kick, staggering his run up in an attempt to get Shakes to pick a corner — a move that failed as the keeper equaled his effort, holding the score knotted at 1-1.

The goalkeeping performances were markedly different from the last time the two teams met — six weeks ago in State College. Errors were rife in that game, a 3-2 victory for the Nittany Lions. Lowell, a freshman, started his Maryland career poorly, conceding three first-half goals, two on preventable efforts.

So, what started with a mistake concluded with two goalies fighting desperately to keep their teams in the game. And both succeeded.