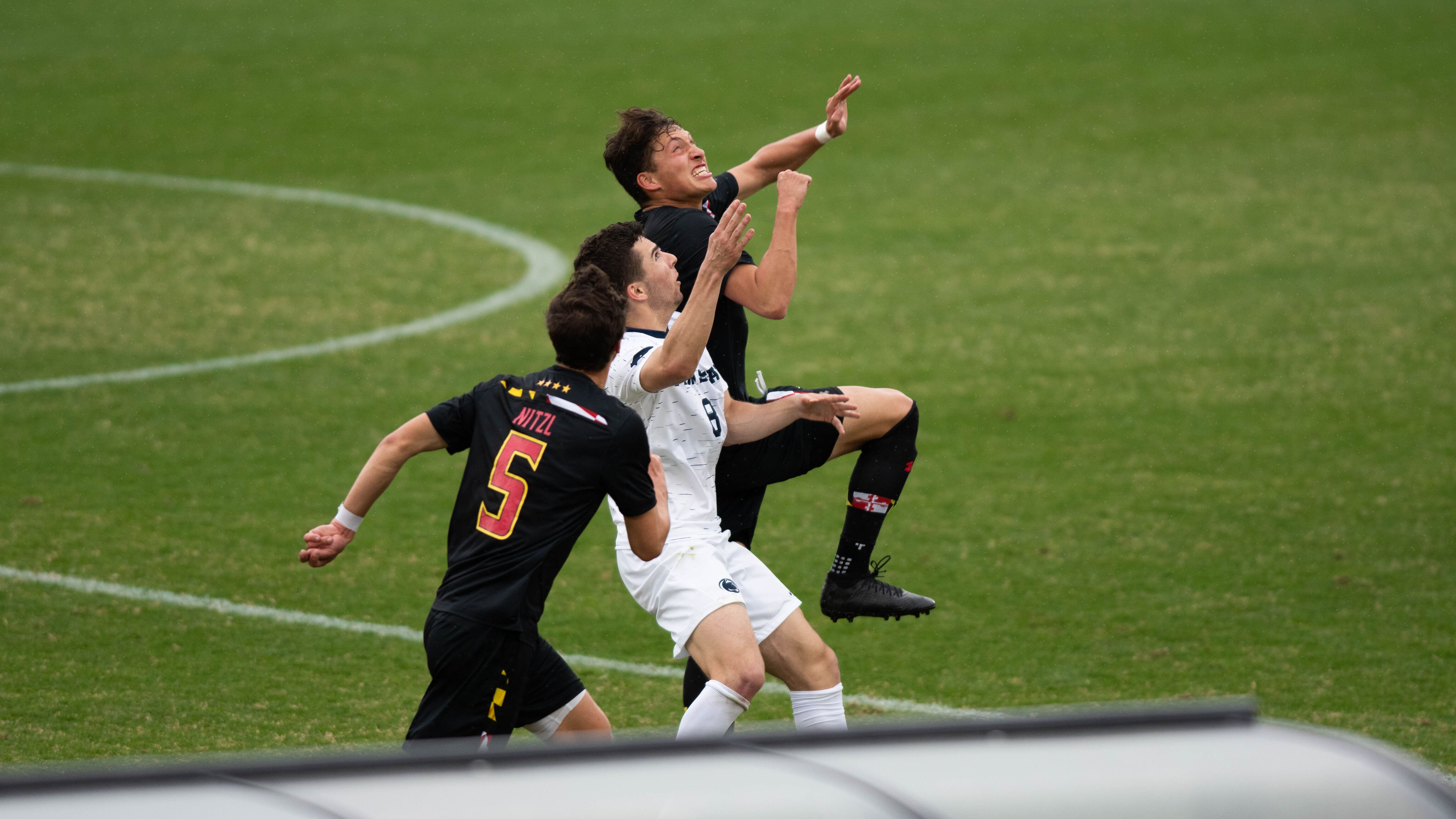 With Peter Mangione rapidly approaching, goalkeeper Jamie Lowell stood all alone. A goal would’ve ended the contest in overtime. Lowell came out aggressively, challenging the shooter and cutting down his angle. As the ball came off of Mangione’s foot, it caused a resounding thud as it collided with the keeper, neutralizing a prime opportunity for the Nittany Lions.

Lowell’s play kept the Terps in the game, but his save would be matched by Penn State’s goalkeeper, Kris Shakes. With under four minutes left in the second overtime, Shakes made a pair of saves, the first a startlingly-quick reaction to a Paul Bin strike, to keep the game tied.

“A couple times I swear I thought the game was over,” forward Justin Gielen said.

That’s how the match would end, scoreless in the two overtimes, a 2-2 draw between Maryland’s men soccer and its Penn State adversaries. Coming into the game, a tie would’ve been a solid result for the Terps. But a series of late blunders left the home team rueing what could have been a momentous three points in a senior day celebration.

“I thought we were in control of the match from the beginning to the end. I think we deserve better,” head coach Sasho Cirovski said. “I don’t think that they ever had the better of the entire game.”

The Terps were only in overtime because of a mistake in the 87th minute. With time expiring, Maryland looked like they were en route to a resounding victory, a solid effort that would net it a fifth straight win.

Instead, it allowed Penn State’s Pierre Reedy to sneak into a scoring position, where he knocked a ball into the far right corner as Lowell sprawled. His fingertips were just centimeters away from knocking it harmlessly away, but the ball crept in for the equalizer.

“To give up a goal that late is unacceptable,” Cirovski said. “…We didn’t manage [the game] very well.”

The lead Maryland lost came in the second half as well, off the right foot of Malcolm Johnston.

Midway through the latter period, Johnston stepped up to the penalty spot, both teams standing behind him. He paced forward and drove his powerful right foot forward for a low shot that was sent to the left corner.

It was his first shot of the game, but it was the only one he needed.

Emblematic of the constant argument between teams and referees, Johnston only gained the penalty kick opportunity after heavy protest from the Terps bench. The initial call was a corner kick after he was taken down inside the box, but after a quick congregation by the officials, they reversed the call to the fateful penalty.

Maryland’s first goal came off a beautiful Justin Gielen feed. Gielen ran down the right sideline, giving a slight pause before darting back toward the goal. With a pair of white-clad defenders around him, he lofted a high arching cross that landed precisely past a pair of Nittany Lion defenders and into the feet of Ben Bender.

Bender — who’d been dubbed one of the best talents in the entire nation by his teammate Paul Bin — showed exactly why he received such acute praise. His first touch was tipped off the crossbar by a leaping Shakes, but bounced down right back to the waiting Maryland attacker.

As the ball fell down with the keeper on the ground and out of position, Bender swung his head forward, knocking the ball into the net for a goal, his second of the season.

“Justin [Gielen], had a really good touch through and then he just picked his head up and looked for that far post ball, and I beat my defender to that,” Bender said. “I had a shaky touch but just kind of muscled the ball through in the goal.”

After the goal, the Terps kept pushing, peppering Shakes with a litany of shots. But none of them could find the net.

Penn State would respond midway through the half, as Peter Mangione made himself known to the Terps defense. After receiving a high-arching pass, he found himself surrounded by three Maryland jerseys.

Unfazed, he kept his wits, finessing his way past one sliding defender. With the goaltender Lowell out to challenge, he slid the ball into the bottom corner before jogging toward the throng of his celebrating teammates.

For the rest of the half, neither team generated a clear shot. There were smooth passes and deft dribbles, but neither team was able to sustain a consistent offensive pressure.

Midway through the frame, Bin received a pass in the box before being taken down by the Penn State defense, prompting a whistle from the referee for a penalty kick. Bin stepped up and knocked the ball low and to the right, but instead of the back of the net he met the gloves of Shakes, who knocked the ball away and prevented a rebound opportunity, a missed chance that would loom large soon after.

Shortly after Johnston’s goal, with the Terps clinging onto their slim 2-1 lead, Bloyou would nearly strike again, sizzling a shot that barely missed, falling dangerously over the goal and out of play.

“We did a poor job of putting pressure on the ball, played a little too safe,” Cirovski said. “And they got into a good spot and the kid finished it but that’s a play that we should not allow it to happen late in the game.”

Although both teams earned the point for the tie, the match was an unfortunate outing for the Terps, who squandered a litany of opportunities and turned what could’ve been a resounding victory into a much less impressive draw.