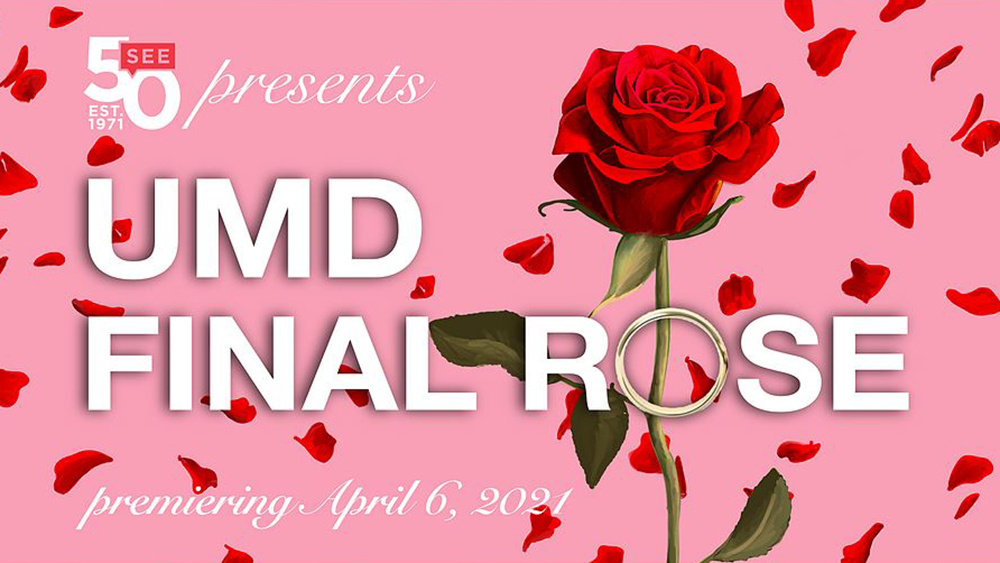 Navigating college classes amid COVID-19 outbreaks, sequesters-in-place, virtual classes and dining hall takeout is nearly impossible. Trying to also add in any semblance of a love life makes for a nearly impossible goal.

So this semester, the University of Maryland’s Student Entertainment Events created UMD Final Rose, a campus spinoff of ABC’s The Bachelor franchise to help one lucky contestant find love — or at least get a couple dates out of it.

Avni Khera, SEE’s performing arts director and a senior communications major, said she’s a big fan of The Bachelor franchise and has been wanting to put on an event inspired by the series for a while.

“Since we’re in COVID and we can’t really go to events physically in person, I wanted to make it an interactive event,” Khera said. “Interactive events are a lot more fun, since we’re all cooped up at home.”

The application process for the series contestants was conducted virtually, but filming was done in person with a small production crew at Stamp Student Union, following all guidelines set by this university and the Centers for Disease Control and Prevention.

“The only people that were there were very necessary to the project,” Khera added.

Although filming was delayed due to campus limits on social gatherings, the team managed to wrap up the series, which is set to premiere next week.

The star of the show is Riya Chaudhry, a junior government and politics and studio art major.

“I think that the audience is going to love her,” Khera said.

Chaudhry saw the call for bachelorette applications on SEE’s Instagram and jokingly said her friends pressured her into applying.

“We put together an audition, and I just sent it to throw it in and see what happens,” she said.

She describes herself as friendly and open-minded. Her academics are important to her, and she wanted the contestants to get to know her just as much as she got to know them.

“There’s a part where they asked me questions so I could talk about myself a little bit because it makes it a little less one-sided and makes me less of a stranger,” Chaudhry said.

There are three contestants vying for the title of Chaudhry’s bachelor, and the winner will be awarded an ice cream date. Chaudhry said narrowing down her potential suitors was a challenge.

“I don’t like hurting people’s feelings!” she said. “Having to make actual choices when people are putting their feelings out there I think was definitely really difficult for me.”

Chaudhry sympathizes with her contestants because she is also just hoping to put herself out there and try something new.

“I was just trying to get out of it a really positive experience,” she said. “I definitely had a lot of fun.”

She’s also found out a lot about herself in the process, and she’s excited to take that knowledge with her as she navigates new relationships.

“I learned that I’m a lot more adventurous than I thought,” she said. “I learned … a little bit more of what I want or don’t want in a future partner.”

Chaudhry admitted she was a bit nervous for everyone’s reactions to the show, but she’s also looking forward to seeing everyone’s responses to it.

“I’m also really excited because I think it’s gonna be really fun, and I hope that people at least get a few laughs out of it,” she said. “And these times can be kind of serious and kind of sad, so if I can bring a little bit of liveliness to somebody, then I think the whole thing was worth it.”