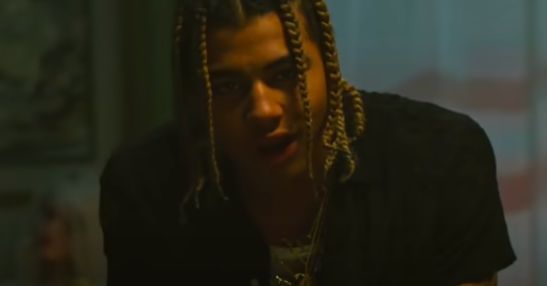 2020 was 24kGoldn’s year. He dropped “Mood” featuring Iann Dior, which became one of the year’s biggest hits. The songs he released after — such as “Coco” and “3, 2, 1”— may not have been as high on the charts, but they were just as great. It seemed like 24kGoldn just couldn’t miss. It also seemed unlikely he could keep this streak going. Luckily, his debut album El Dorado proves that 24kGoldn may truly be “the golden one.”

Seeing as the 20-year-old rose to popularity in the middle of the pandemic, he has thrived in a music industry that is obviously very different from the norm. El Dorado is a chance to prove his longevity. He has also proven himself to be a Gen Z icon, thanks to TikTok. His songs and content have been trending for months, but El Dorado shows that 24kGoldn is more than just a trend; he has power beyond a few solid singles.

His newest project is a well-executed mix of pop, rock and rap, but combining those genres isn’t necessarily groundbreaking. For example, “3, 2, 1” sounds like it could have easily been pulled from Post Malone’s or Juice WRLD’s discography, but it still manages to be unique. It sits perfectly in the intersection of pop and rap, with clear rock influences. Its powerful, ringing chords support lyrics about a complicated relationship. The sound makes up for the lyrics, which are nothing new. That is not a problem, though — it’s still inexplicably catchy.

El Dorado manages to straddle the line between pop and rap without feeling gimmicky. It’s not a lame attempt to make a few trending songs; instead, it feels more professional than what would be expected from a debut album. Thanks to all the attention 24kGoldn got in the past year, he doesn’t need to try to attract attention to his music online. He can just focus on the sound, and El Dorado is packed with addicting ones. Somehow, it feels like he did it all effortlessly.

“Love Or Lust” emerged as one of the strongest songs on the project. It’s the proof we needed that 24kGoldn is defined as more than some random chart-toppers, and it’s also the greatest of El Dorado’s many earworms. “Love Or Lust” perfectly embraces the groovy-ness of trending pop music. Meanwhile, “Butterflies” is a 2000s pop-tinged hit all about the young artist’s love.

[Review: Lana Del Rey’s new album isn’t enough to save her from controversy]

Those songs are the last things you would expect from a member of XXL’s 2020 Freshman Class — 24kGoldn is definitely difficult to categorize. However, he confidently embraces that flexibility as a young artist, and he will keep releasing great music regardless of the genre.

Still, 24kGoldn remains a legitimate rap force. Those pop moments shine, but El Dorado’s rap ones are just as strong. He snagged features from two of the industry’s biggest talents, DaBaby and Future. Despite starting on SoundCloud, there is no sign of temporary music trends (like mumble rap) here. Songs like “Company” instead highlight the beats that give rap songs staying power.

Of course, El Dorado closes with “Mood,” his biggest banger. It feels like a powerful, self-assured reminder of what he is capable of. And if he can continue building on what he started here, El Dorado is a sign of a bright future for 24kGoldn.