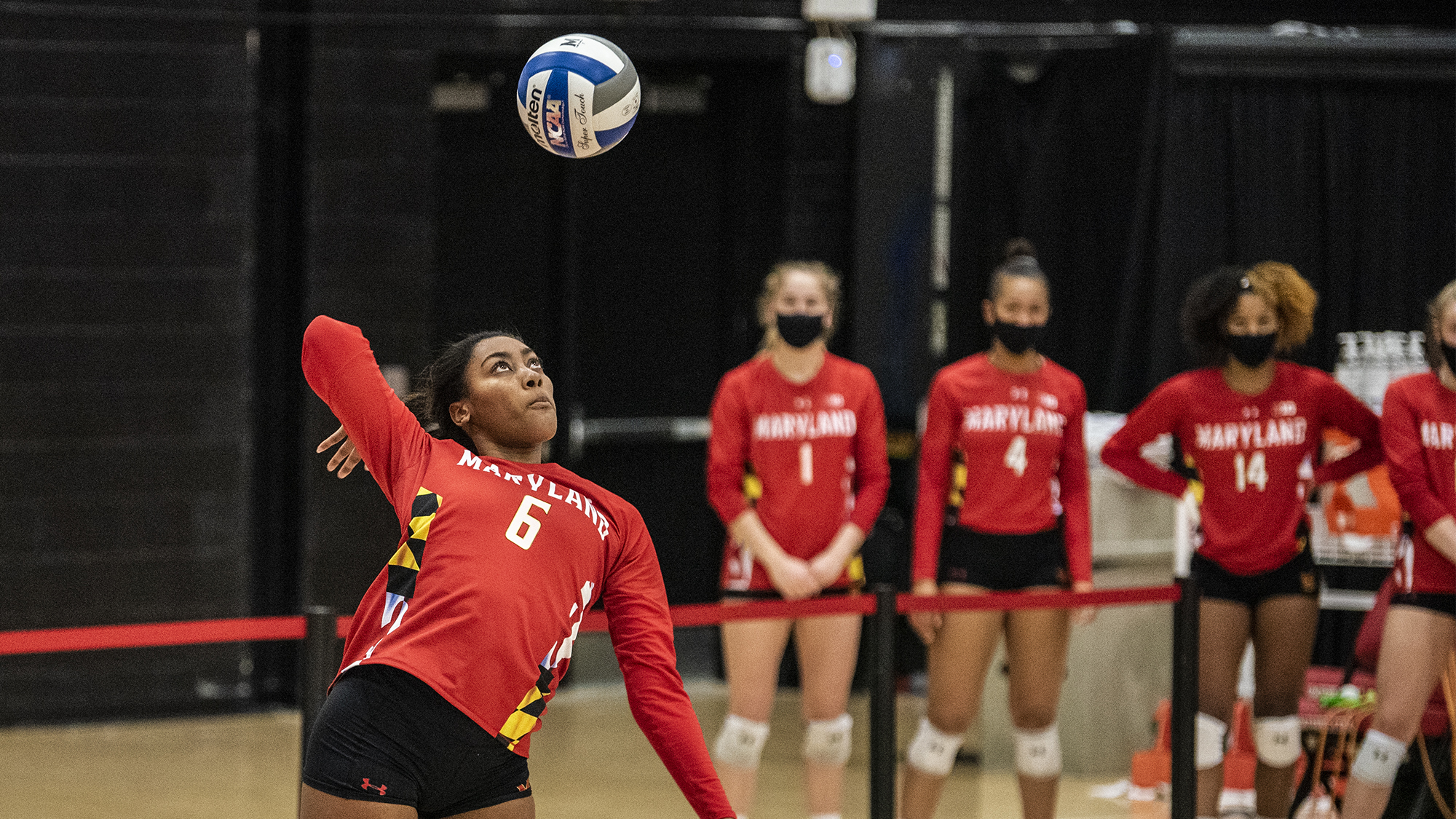 Rutgers right side hitter Beka Kojadinovic spun the ball off of her hand twice before lobbing it high into the air for a serve attempt. The Scarlet Knight leapt, swung, and pummeled the ball across the net, where it careened off of outside hitter Erika Pritchard for a service ace.

“[Service aces were] the key, to be honest with you,” coach Adam Hughes said. “We know it’s something we’re gonna try to focus on … you know sometimes it’s also a confidence thing, sometimes it’s different types of servers cause you problems.”

Rutgers middle blocker Tina Grkovic got the ball rolling for the Scarlet Knights early in the opening frame, notching three quick kills on three swings to garner her team a 6-2 lead in the first set. The Terps quickly regained ground however, as middle blocker Rainelle Jones led a Maryland offensive charge to chip into Rutgers’ early advantage.

Jones, who accounted for five of Maryland’s 13 kills in the frame, was the Terps’ driving force throughout the first set. With Maryland holding a three-point advantage midway through the frame, setter Sydney Dowler lobbed a pass in Jones’ direction, which Jones spiked home with authority to give the Terps plenty of cushion to work with.

However, Jones’ impressive first set output wasn’t enough to hold off a pesky Rutgers squad. Following Jones’ putaway, the Scarlet Knights ran off six of the next seven points, capitalizing off of two kills and a service ace from right side hitter Kamila Cieslik to regain control of the set –– control that they would not relinquish in a 25-23 first set victory.

“I thought we had a chance there to win the first set and didn’t really execute down the stretch,” said Hughes. “[That] kinda puts us in a tough spot.”

Much like the first set of action in Saturday’s contest, the second frame was a game of runs by both squads. After Rutgers raced out to an early 10-6 lead, Maryland responded with a 5-0 run spurred by back-to-back Sam Csire spikes to take its first lead of the second set.

And while the Terps were unable to maintain their advantage in the first set of the matchup, they would not be denied in the second.

After a Cieslik kill cut Maryland’s lead to just one late in the frame, the Terps fired back with back-to-back kills from Laila Ricks and Erika Pritchard in response. With their offense now firmly in rhythm, the Terps pulled away from the Scarlet Knights to close out the second set, as another Dowler to Jones connection on set point tied the match at one set apiece, 25-22.

After hitting a dazzling .400 hitting percentage to take the second set, Maryland’s substantial offensive momentum spilled over into the pivotal third frame of action. Ricks, who tallied three of her nine total kills in the third set, spiked home two booming kills to gash Rutgers’ defense, giving the Terps the upper hand early in the set.

However, as Maryland became used to seeing over the course of the two-match series with the Scarlet Knights, Rutgers wouldn’t go down without a fight.

The Scarlet Knights’ charge was led by outside hitter Anastasiia Maksimova, who caught fire midway through the third set. After a Cieslik service ace gave Rutgers a three-point lead, coach Adam Hughes burned a timeout, only for Maksimova to succeed on back-to-back kills to force the Terps back to the bench.

And despite the two timeouts, the floodgates were open for Maksimova and the Scarlet Knights.

With Rutgers holding a five-point lead late in the frame, Maksimova continued her dominance over Maryland in the set. The star outside hitter, who accumulated 16 total kills in the match, blasted home three more kills in a row, pushing the third set firmly out the Terps’ reach in a 25-17 third set victory.

So, in a mirror image to Wednesday’s 3-1 loss to the Scarlet Knights, Maryland attempted to claw out of a one-set deficit against Rutgers.

The Terps’ comeback effort started off with promise, as both squads exchanged leads to open the set. However, it was the Scarlet Knights that delivered the knockout blow to send the Terps packing.

After a Kojadinovic kill forced a Maryland timeout, Rutgers kept its foot on the gas. Kojadinovic and Maksimova continued to dice the Maryland defense as Rutgers’ lead continued to balloon, as the duo combined for 10 kills in a comfortable 25-15 fourth set victory.

So, once again the Terps were unable to rally and force a fifth set against the Scarlet Knights, and fell to 4-14 on the year with two matches left in the season.

“I feel like… it was more of a learning experience on how we need to better our game,” Jones said. “Taking one step back to take two steps forward for the next upcoming matches because we do, you know, have two last ones out with the seniors.”