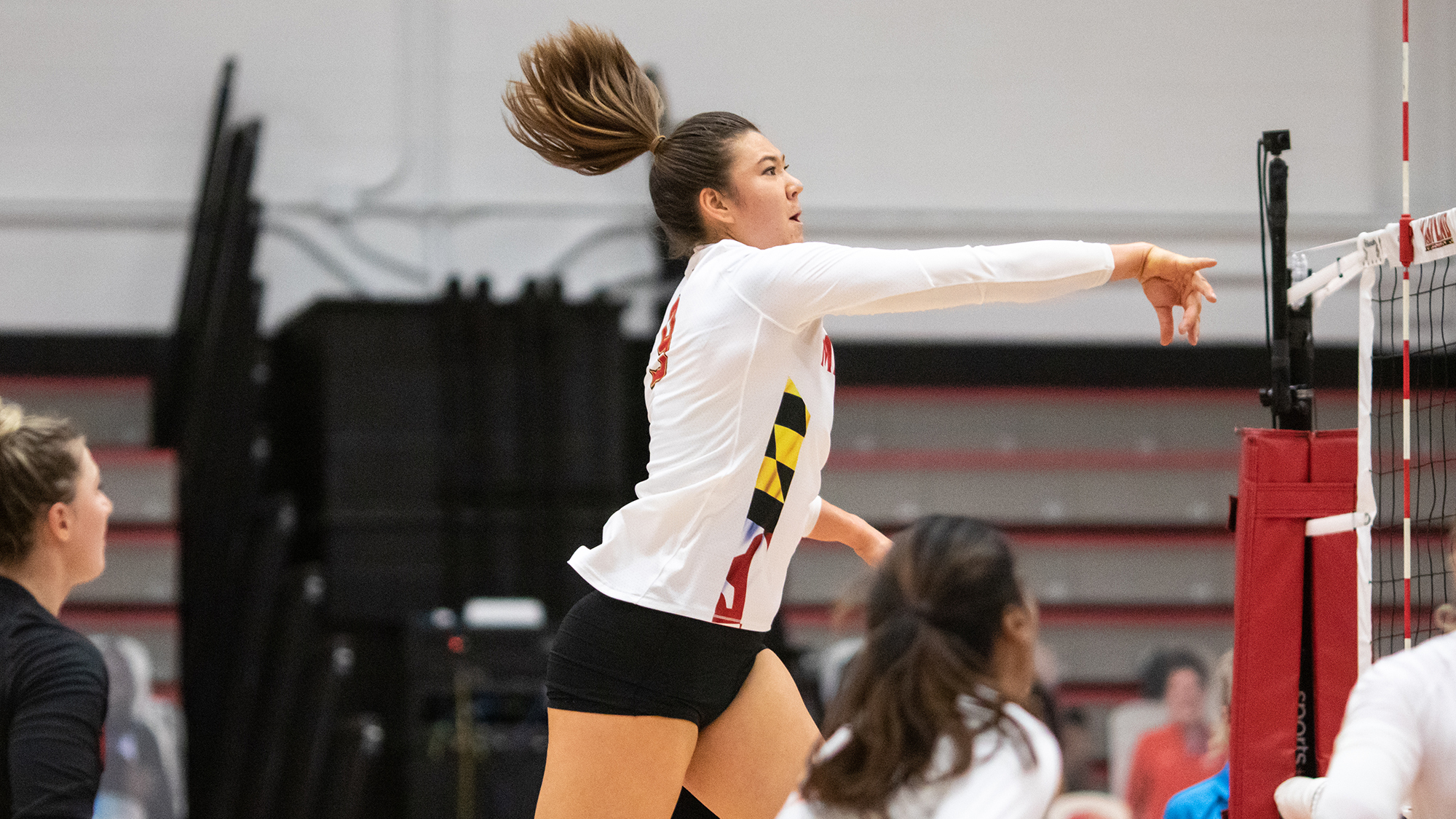 After a blazing cross court kill attempt by outside hitter Sam Csire drifted wide and out of bounds, Rutgers’ bench mobbed the Xfinity Center Pavilion floor.

Coming off of two straight losses over the weekend, the Terps came out swinging to open Wednesday’s contest. Two stifling blocks at the net sandwiched by an Erika Pritchard dump kill gave Maryland an early 3-0 lead, much to the delight of the Xfinity Center Pavilion crowd.

However, Maryland’s raucous support was soon muted by a barrage of Scarlet Knight attacks. It started with outside hitter Anastasiia Maksimova, who notched two of her four first set kills in quick succession to eradicate the Terps’ early advantage.

And Rutgers would only pour it on as the set progressed.

The Scarlet Knights, who came into the contest ranked 12th in the conference in kills per set, gouged the Terps’ vaunted defense with 13 first set kills to Maryland’s eight. And despite coach Adam Hughes burning two of his team’s timeouts in hopes of slowing Rutgers’ roll, the Scarlet Knights wouldn’t be deterred in a comfortable 25-16 first set victory.

[Maryland volleyball hopes to get back to winning ways against Rutgers]

“I thought Rutgers played very hard, it’s a good team [and] we respected them going into it,” said Hughes, “we knew they would challenge us but, you know, I thought we were way too inconsistent.”

With Rutgers seemingly cruising after a dominant first set outing, Hughes and the Terps were in dire need of a spark down a set at home.

That spark came from outside hitter Erika Pritchard in the second set.

Pritchard, who came into the contest ranked in the top ten in terms of kills per set, began imposing her will on the Scarlet Knights on the offensive end. Racking up three of her five second set kills early in the frame, Pritchard dissected Rutgers’ defense with an array of attacks from the wing, fostering a six-point lead that the Scarlet Knights were unable to claw their way out of.

The second set ended just as it had started — with Pritchard pushing the pace. Two straight Pritchard service aces gave Maryland a plethora of set points to work with, and a cross-court Sam Csire kill that whizzed past Rutgers’ line of defense put the nail in the coffin in a 25-16 second set victory for the Terps.

With the match knotted at one set apiece, both teams jostled for position in the pivotal third set of action.

The Scarlet Knights struck first, racing out to a 4-0 lead behind two quick kills and a Maksimova service ace. The Terps countered with a run of their own, erasing their early deficit thanks to back-to-back Sam Burgio service aces.

However, it was Rutgers who delivered the knockout blow to take a 2-1 lead.

After an overturned call on a Sam Csire kill attempt stretched the Scarlet Knights’ lead back to four, the Terps couldn’t regain their early momentum. Rutgers’ talented offense returned to earlier form, sharpening late in the frame in a 14-kill set to win the third frame, 25-17.

Now on the brink of losing their third straight match, this time to a Scarlet Knights squad that entered Wednesday’s game with just two wins, the Terps came out with a renewed sense of urgency to start the fourth frame. Off the bench came outside hitter Hailey Rubino, who gave Maryland a jolt with multiple diving saves. With Maryland up four points early, Rutgers called a timeout.

But Maryland’s lead would crumble amid a slew of Scarlet Knights spikes. Rutgers roared back, fueled by a balanced attack that saw three different Scarlet Knights notch at least three kills in the frame.

Right side hitter Kamila Cieslik brought Rutgers to match point, hurling the ball past a weary Terps defense. And on the very next possession, Csire committed an attack error. The Scarlet Knights cheered relentlessly, delighted to get their first victory in a month.

Meanwhile, Maryland sulked back to the locker room, unable to halt its losing streak, which now stands at three games.

“Consistency.” setter Sydney Dowler said. “I think Hughes talked about it in the huddle, it really started on Monday we didn’t have a great practice… we gotta work just as hard in practice as we do in games.”

CORRECTION: A previous version of this story’s subheader stated Maryland volleyball’s record is 4-12. The Terps’ record is 4-13. This story has been updated.