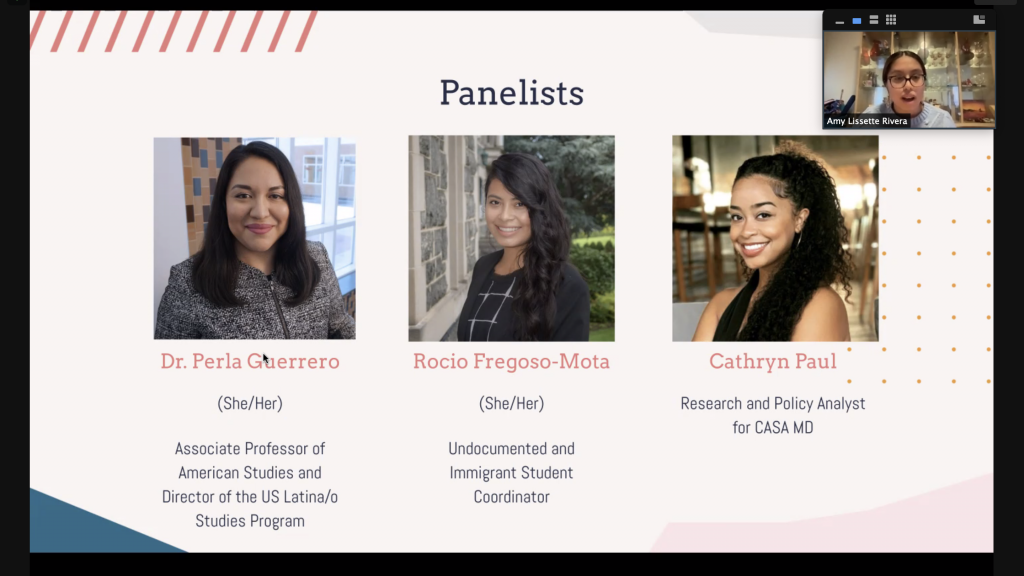 Political Latinxs United for Movement and Action in Society held a Latinx Town Hall on Thursday to discuss a number of issues, including the University of Maryland’s contract with ICE and immigration policy under President Joe Biden.

About 20 students attended the town hall and heard from PLUMAS members alongside Perla Guerrero, a professor and director of the U.S. Latina/o studies program, Rocío Fregoso-Mota, the undocumented and immigrant student coordinator, and Cathryn Paul, a research and policy analyst for CASA MD and alumna of this university.

This university’s contract with ICE, which began in 2017, covers up to 25, two-day counterterrorism training sessions led by researchers at the National Consortium for the Study of Terrorism and Responses to Terrorism, according to the STAMP’s website.

Still, the university’s contract can have damaging effects on students’ well-being, Fregoso-Mota said.

“It’s still very much a real concern,” Fregoso-Mota said, “the psychological and safety aspect of … whether or not them coming to their class will be potentially crossing someone that may or may not be involved in an organization such as [DHS or ICE].”

In recent years, PLUMAS and other student groups have formed campaigns to pressure this university’s administration to end the contract. As it stands today, the contract will expire in March 2022, and university President Darryll Pines indicated that the university may not pursue another one.

“I’m not sure if there’s a desire to renew it,” Pines said during a virtual town hall co-moderated by The Diamondback in August.

Still, it’s unclear if the university will follow through with terminating the contract. PLUMAS also launched a petition earlier this year calling for the end of the contract, which has garnered about 900 signatures.

The panelists also took questions on the changing landscape of immigration policy under the Biden administration and how changes to policy can affect individuals at a local, state and national level.

There is a risk of regression, Guerrero explained, adding that the Democratic and Republican parties in this country are much more alike than they seem.

“We cannot rest on the idea that Democrats are going to save us, nobody is saving us,” Guerrero said. “We have to save ourselves.” Guerrero encouraged attendees to vote and to organize for immigrant rights and against juvenile facilities and separation at the southern border.

She also explained why this country needs a “complete overhaul of immigration” policy. She criticized the president’s latest initiative to carve a pathway for undocumented immigrants to gain citizenship.

Guerrero highlighted that the president initially wanted to set a pathway for all 11 million undocumented immigrants, but only recently has narrowed in on a pathway for beneficiaries of the Deferred Action for Childhood Arrivals and Temporary Protected Status programs.

“We need to advocate on a massive level for fundamental reorientation of who we think is worthy, as a human being, and then that will inform our immigration policies,” she said.

The last section of the town hall revolved around the importance of building community and coalition during the pandemic and the concept of “Latinidad,” which refers to the shared attributes among Latin American people.

Each panelist touched on how the pandemic has affected relationships and how people can get together to virtually form a community, but also agreed that forming community can be defined as something as simple as showing up for one another.

“Come into every space with an open mind and an open heart,” said Paul. “Meet people where they are. Show up and just be true to yourself.”

As an institution, though, Guerrero said the university should prioritize funding for marginalized student groups so student leaders can coordinate additional programming, events and scholarships.

Fregoso-Mota also tuned in and explained that this is the first year her office has a budget, though it is much smaller in comparison to other offices and departments. Still, she added that other offices need additional support as well.

“Every person in higher ed that has stake in upholding itss white supremacy institutionalized structure will tell you there is no money. That’s literally bullshit,” she said. “There is money. It’s just where they want it to go, and how they want it to be used.”

She then went on to criticize how former university President Wallace Loh is earning the second-highest salary at this university, yet students hardly receive financial support.

“It’s just crazy. You have money to pay him this, but you don’t have money to give it to students,” she said. “The more we can dig … and see where the money is going, exposing them, letting them know we’re not on board … that’s where I think a lot of that comes out.”