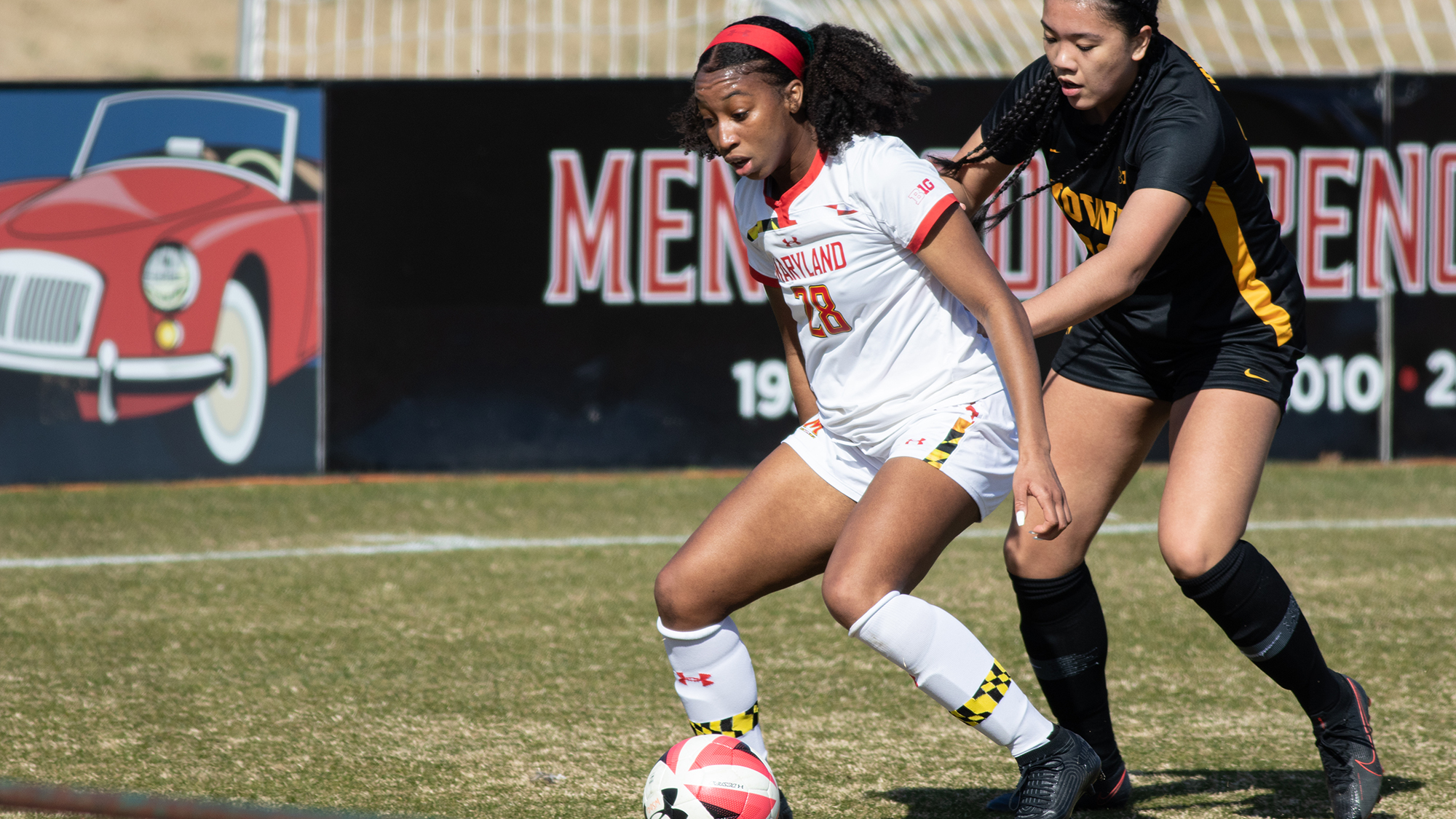 There were the pregame ceremonies: the hugs, flowers, and framed jerseys. There were smiles, commemorations, and, perhaps, nostalgia.

This season, the Terps have six seniors on their roster: Hope Lewandoski, Malikae Dayes, Mikayla Dayes, Sydney Staier, Anissa Mose and Alexis Hogarth. Each was acknowledged for their profound impact on Maryland’s women’s soccer.

But for all of its Senior Day festivities, the Terps’ performance on the pitch didn’t change.

Maryland lost in heartbreaking fashion, falling to Iowa in overtime, 1-0. But though the Terps couldn’t send their eldest players off in style, the team played with an intensity and grit that honored them.

“I think we were all really excited for our seniors,” said junior Emily McNesby. “It was our last game on Ludwig today, so we were trying to play for any of the seniors.”

It started with Lewandoski, who shone in midfield. She ran relentlessly, made a goal-saving tackle in the first half and took on a hard-working Iowa midfield. Lewandoski’s versatility has made her extremely valuable to the team throughout the season.

“She was pretty much dominating being center mid for us,” said coach Ray Leone. “Just going back and doing whatever she needs to do for the team. It’s amazing.”

Mikayla Dayes also played her part. The forward has been an integral cog in Leone’s team this year, showing intensity up front and running at defenders, and on Sunday Dayes almost won the game with an 88th-minute shot against the Hawkeyes.

Staiere worked in tandem with Lewandoski in the midfield, tallying one of only three shots on target for Maryland over the course of 79 minutes on the pitch.

Still, for all of the seniors’ contributions, Maryland couldn’t nab a win against the well-drilled Iowa squad. In fact, on the Terps’ Senior Day, it was the underclassmen’s potential that shone.

Kennedy Tolson, a freshman goalkeeper, worked hard to try and secure a victory for the Terps, making eight major saves throughout the lengthy match. And Alyssa Poarch, a redshirt junior, showed the most promise on the other end, tallying four shots and playing all 97 minutes.

The Terps were left disappointed. Not only did they lose another game, but they failed to honor their seniors with a victory in their last ever game at Ludwig Field.

For Leone, this class was particularly important. The coach — in his fifth year at the helm — has grown into the role alongside the current crop of seniors.

And for him, it’s that growth and companionship he’ll remember — regardless of the results.

“A lot of those friendships that they’ve made and seeing how close they’ve become also makes me proud of that,” Leone said. “They came together, you know, for a good purpose: to be Terps for life.”