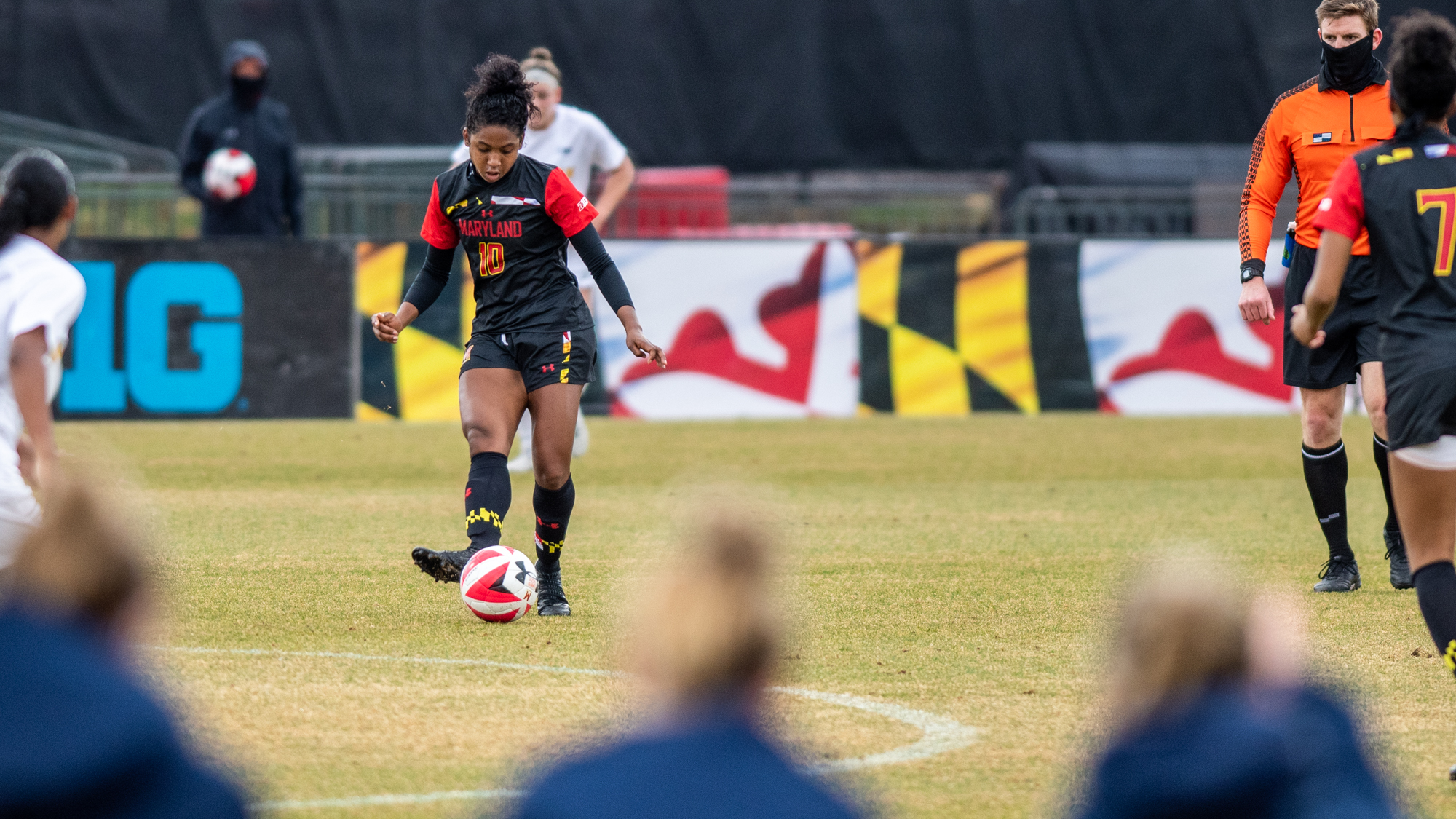 If there was a sequence that best described Maryland women’s soccer’s frustrating season, it was a brief passage in the 10th minute on Thursday.

Michigan forward Danielle Wolfe’s shot on goal was deflected by a Terps defender right into the waiting leg of midfielder Sarah Stratigakis, who then chipped a shot toward the goal. Maryland goalkeeper Kennedy Tolson stayed rooted to the ground as the ball flew over her head and into the back of the net. The sequence resulted in a 1-0 lead for the Wolverines — one they wouldn’t surrender on a rainy day from Ludwig Field that ended in a 4-0 loss for the Terps.

“A fortunate bounce, where we cleared it and then [Stratigakis] gets it right at her feet,” coach Ray Leone said.

Michigan kept Tolson busy in the first half, dominating possession and sending five shots on goal toward the freshman. But Tolson and Maryland’s defense held their ground after the early Stratigakis strike, grounding a Wolverines’ attack coming off a seven-goal performance.

Michigan’s best chance to extend its lead came in the 16th minute, when midfielder Nicki Hernandez found herself in the box. She fired a shot toward the cage, forcing Tolson to dive to her right to keep the deficit at 1-0.

Meanwhile, the Terps could not generate any offense for most of the opening period, with their first chance coming 40 minutes in. Madison Oracion took a Wolverines’ turnover the other way, the junior volleying a shot to the net that forced Michigan goalkeeper Hillary Beall to deflect it over the crossbar for a corner.

Maryland’s best chance of the first half came in its waning seconds. Oracion received a smooth feed from Alyssa Poarch and had Beall beat on the right side of the goal. But she misfired her strike right into the arms of a recovering Beall, closing the book on a sloppy first half for the Terps.

The opening 15 minutes of the second period became a defensive stalemate for both sides as no real threats on goal occurred.

But in the 70th minute, Maryland finally had its chance for an equalizer. Midfielder Sydney Staier slotted a pass through to Poarch on the breakaway, passing her defender with only Beall to beat. But Poarch’s shot sailed over the net, continuing a frustrating afternoon for the Terps.

“We just kind of made eye contact and I saw [Poarch] make her run, so honestly it was an easy ball to pick out, and unfortunately we couldn’t get the finish,” Starier said.

And in the 75th minute, midfielder Olivia Reese was called for a late foul in the box that resulted in a penalty kick for Michigan. Hernandez’s subsequent shot was saved by a diving Tolson, but Maryland’s defense was caught sleeping, allowing forward Sammi Woods to knock in the easy rebound for the 2-0 lead.

From there, the Wolverines cruised. They found the net twice more, capitalizing on more Terps’ defensive errors. The final scoreboard reflected Michigan’s dominance as Maryland remained winless and sulked to its fifth loss in seven games, another major dent in the Terps’ hopes to return to the Big Ten tournament.

“Take away the last 10 minutes which was obviously not a good finish for us, but we still are on the upswing,” Leone said. “We all want to win and want to get three points. So we just got to try to keep improving.”