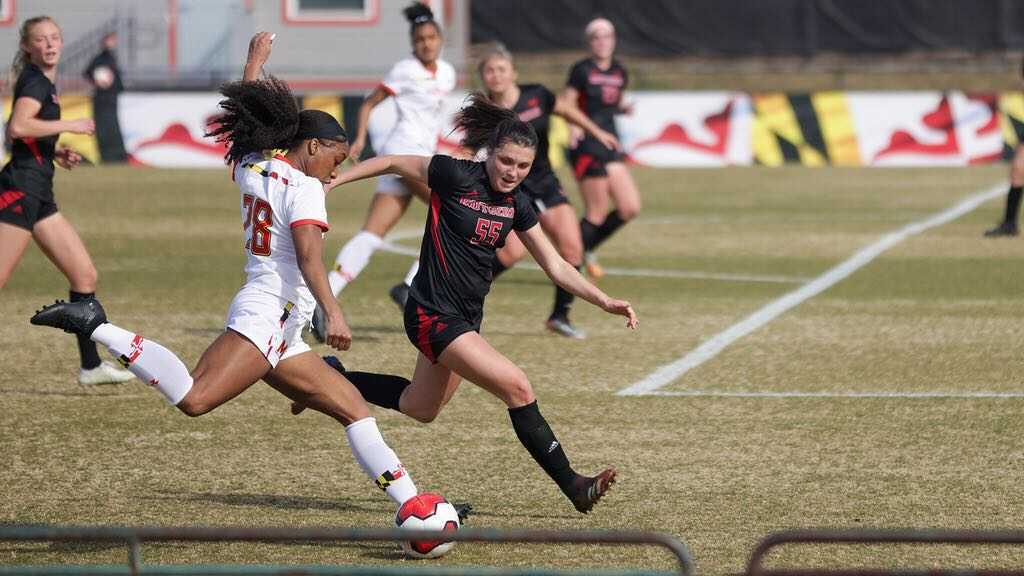 Early in the first half, forward Alyssa Poarch sprinted around the Rutgers back line, freeing herself to rifle a shot toward the net. Poarch’s shot was a rocket, but it grazed the top of the woodwork and flew out of bounds, putting an end to the threat of scoring the first goal of the game.

This was the best of the few scoring opportunities Maryland women’s soccer generated in a 0-0 double overtime tie with No. 17 Rutgers on Saturday afternoon.

“The battle against Rutgers is always hard fought, so I think that, going in today, we had to be there mentally,” Poarch said. “Unfortunately, we didn’t get three points. But we’re happy to get one point, at least, coming out of this weekend.”

Just four minutes in, Rutgers earned its second corner kick of the afternoon, a sign of things to come in the rest of the first half for coach Ray Leone’s squad.

The Terps were slow out of the gate, unable to secure possession for much of the first 45 minutes, and that languid start led to a flurry of attacking opportunities for the Scarlet Knights.

But Maryland made good on its promise of returning to the basics. Midfielder Hope Lewandoski showed her flexibility, filling in at the center back position during Saturday afternoon’s match. Lewandoski’s play on the back line thwarted a few of Rutgers’ opportunities as she recorded a pair of standing tackles that each cleared the ball from the Terps’ defensive third in the first half.

“Wherever I needed to go to help out the team in the moment, that’s what I’m going to do and just stay flexible and keep my mind right,” Lewandoski said.

With patience, the Terps were able to build some counterattacks of their own. But it took fifteen minutes for Maryland to get its first real opportunity in the attacking third. Alyssa Poarch freed herself on the left side, but sent the ball wide of the net with a shot from a tough angle. Still, the chance appeared to release any tension Maryland might have had in the early minutes.

Most of the rest of the Terps’ attacks were met with speedy recoveries by Rutgers, which held possession for the majority of the first half.

In a brutally physical half between the Big Ten rivals, neither could bury a goal into the back of the net despite the chances throughout.

“Honestly, every game in the Big Ten is going to be a physical one,” Lewandoski said. “We have some really good, big, strong teams in this league, and we’ve just got to be there to match up every single game.”

With a chance to score off of a corner kick heading into the halftime break, Maryland loaded the box with plenty of attackers near the back post, but a timely clearance by Rutgers sent the ball rocketing back toward midfield — and the two sides went into the break scoreless.

As the teams returned to kick off the second half, Rutgers’ onslaught of attacking opportunities continued. Three quick chances from the corner kept the Terps in their defensive third, and they waited to build their first attack of the half.

The attacks Leone’s side did create early on were dispatched quickly by the Scarlet Knights as several errant passes turned the ball back over to the Rutgers side.

Maryland looked to rely on its defense, holding strong throughout the second half, as its attackers let the Rutgers back line comfortably control the ball in its defensive third without applying much pressure.

“For us it was just, let them come to us a little bit and be ready when they come at us, so that we can get the ball out, play it out right away and just be ready to attack,” Lewandoski said.

[Maryland women’s soccer is trying to learn from its losses]

Despite a more passive look in the second half, nothing about Maryland’s shift in strategy could be deemed as panic. It looked like the Terps would be satisfied with holding the strong Rutgers squad scoreless.

Rutgers added to its plethora of attacking opportunities and dominated possession for the remainder of the half, but dropping back the fourth member of its back line ensured there would be no breaks in Maryland’s defense.

With just under fifteen minutes left, the Terps’ attack took a blow as Poarch came off the field with an injury. Though she was able to jog off the field herself, the injury kept her sidelined for most of the rest of the half. And missing one of its top goal-scorers, Leone’s side could not create any more opportunities in the final third for about ten minutes.

Maryland earned one more opportunity from the corner in the final three minutes of the half, just moments after Poarch returned to action and forced a counterattack. A weak header by midfielder Olivia Hicks went wide of the net.

Poarch created one more chance, but with no teammates around her, she sent a shot far wide without challenging Rutgers’ keeper Meagan McClelland. The two sides then struggled for possession in the middle third before ending regulation scoreless.

With 20 minutes to score a game-winning goal, both sides entered the overtime period firing on all cylinders. Maryland’s forwards began to collapse toward the ball and the Terps played more aggressively than in the second half.

But Maryland almost let up a goal in less than three minutes. A dangerous cross to Rutgers’ forward Samantha Kroeger gave her a shot just a few feet away from the goal, but she sent it high and the battle between the Terps and Scarlet Knights continued.

A pair of saves by Maryland keeper Kennedy Tolson halfway through the first overtime period kept her team afloat as Rutgers continued to command the pace of play during the first ten minutes of overtime.

“It was a perfect serve and a perfect contact, and so for her to get down to that quickly, it’s a game-saver … the game is over right there if she doesn’t make that save,” Leone said.

Lewandoski made a much-needed standing tackle on a promising breakaway opportunity for Rutgers forward Nneka Moneme during a second overtime period that was otherwise uneventful. Rutgers generated just a pair of opportunities in the next six minutes, but neither were particularly challenging for the Terps to stifle.

A no-call on an inadvertent hit to the face on a Rutgers attacker from a Maryland defender inside the keeper’s box with just over three minutes left was the last real chance to see a goal, but the referee let play go on, and the game ended without the ball ever hitting the netting.

Heading into the final two games of its long home stance next week, Maryland will need to break into the attacking third more often to create scoring opportunities. But holding Rutgers to a scoreless tie is a step in the right direction for Leone’s side after dropping four straight games.

“I think we could have made some better first passes. But more than that, I think, when we were out on the break, we rushed it,” Leone said. “But at least now we can coach some regular stuff. We were hardly getting any attacks [so far this season].”