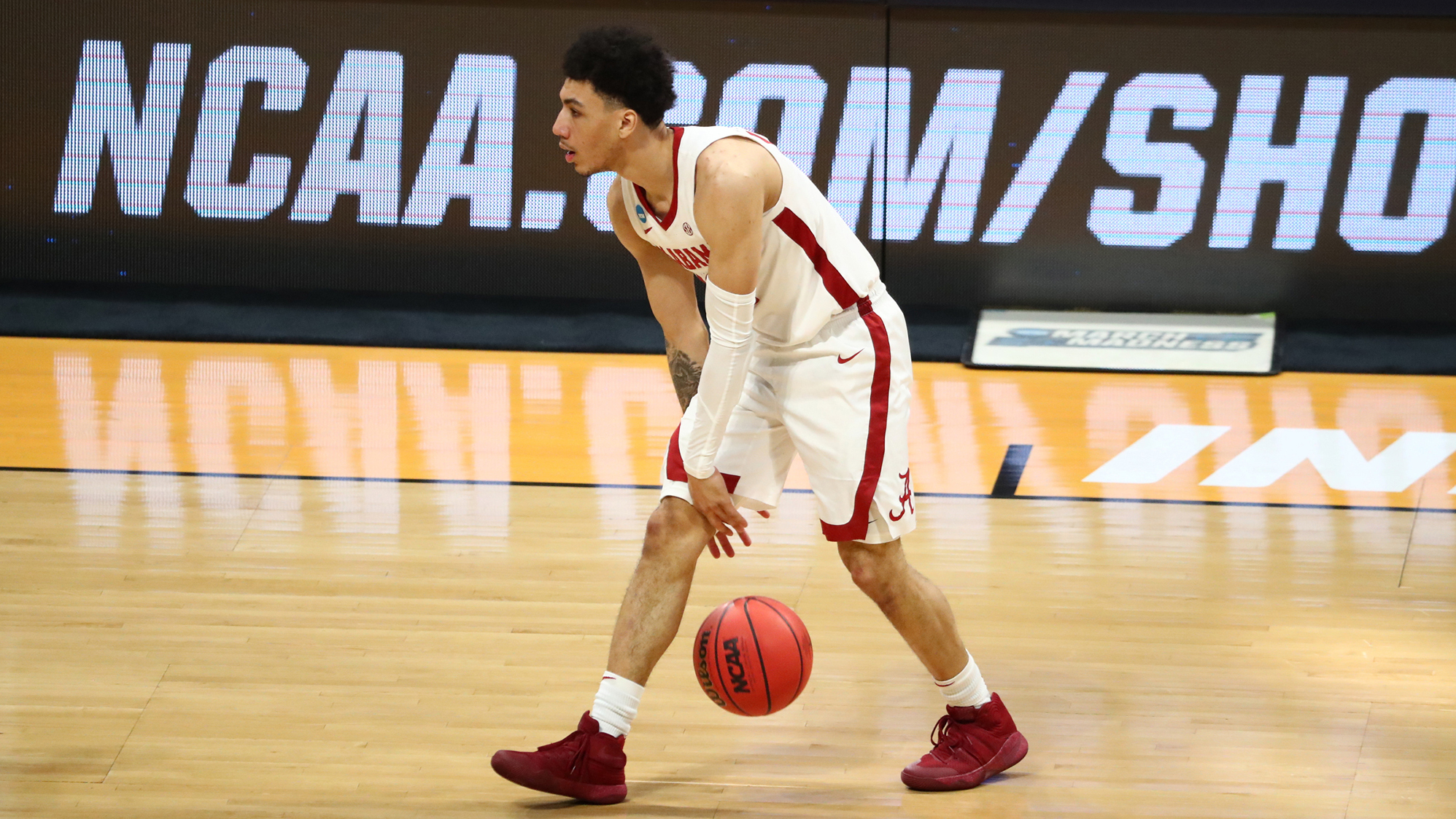 Jahvon Quinerly dribbles up the court during Alabama’s 68-55 win over Iona on March 20, 2021. Quinerly dominated Maryland in the following game, recording a double-double. (Photo by C. Morgan Engel/NCAA Photos via Getty Images)

Jahvon Quinerly was nowhere to be found. He had already laid waste to Maryland men’s basketball forward Jairus Hamilton once, shifting the ball from left to right, banking an off-leg layup in the first half.

This time, Hamilton could only watch, crashing to the ground as Quinerly glided to the rack. With defenders approaching, the Alabama guard whipped a left-handed bullet pass into the corner.

Then, he strutted up the court. He lifted three fingers as he stepped. Quinerly didn’t need to see whether John Petty Jr.’s shot went in. He could feel it. He heard the hymns coming from the Crimson Tide bench. He saw the raptures in the stands.

Few guards have found as much joy against the Terps as Quinerly did Monday night. Under the glow of the Bankers Life Fieldhouse spotlight, the Hackensack, New Jersey, native came to play. Quinerly poured in 14 points and notched 11 assists while setting the pace for an explosive Alabama offense that hit 16 triples en route to a blowout victory.

“Quinerly was off the charts,” coach Mark Turgeon said. “He controlled the whole game, we couldn’t keep him in front of us.”

That helplessness wasn’t a feeling Maryland was particularly used to. The Terps made a habit of locking down prolific guards in the Big Ten, blotting Marcus Carr, Ayo Dosunmu and Ron Harper Jr.’s influence on the way to momentous victories.

The trend continued in the postseason. Matched up against Maryland’s Darryl Morsell, UConn guard James Bouknight toiled, falling below his season scoring average while coughing the ball up three times in the first round of the NCAA tournament Saturday.

“I thought we really guarded the ball because man I’ll tell you, those two little guards (Bouknight and Huskies guard R.J. Cole) are special,” Turgeon said after Saturday’s win. “I thought we did a good job with them.”

But Quinerly offered a different challenge. He’s a gifted ball-handler, capable of freezing defenders with a variety of crossover and hesitation combos. He’s also a marksman from deep, boasting 48.7 percent field goal shooting while hitting nearly 45 percent of his three-point attempts.

Maryland’s switch-heavy defense struggled to blight Quinerly’s impact. He picked up a pair of assists in the game’s opening minutes. And by the time Quinerly crossed Hamilton, he was fully in rhythm.

Midway through the first, Quinerly drove downhill, stopping just short of the restricted area. In one fluid motion, he shuffled a pass to Crimson Tide forward Juwan Gary, who finished with a layup to give Alabama its first lead of the game.

Quinerly also hit a stepback three over Donta Scott’s outstretched grasp, chirping with the Maryland forward as his shot fell through. He was playing with confidence. Soon, his teammates would follow.

That rhythm would continue to drum along the Bankers Life Fieldhouse walls over the course of the night as the threes rained. Jaden Shackelford had 21 points. Petty had 20. Forward Alex Reese added 13 coming off the bench.

But the heart of it all was Quinerly, Alabama’s dizzying floor general who danced across the floor to create open looks for the Crimson Tide. By the end of the first half, Quinerly had already racked up nine assists.

The damage was done. The Terps, most comfortable playing at a plodding pace, were unable to stop Alabama’s hail of triples. An eight-point halftime deficit quickly became a 23-point gulf.

“It’s definitely something we haven’t seen before,” Morsell said.

Quinerly capped off the festivities in style, rising over Scott to splash another three. He muttered more words at Scott, eventually receiving a technical foul. Crimson Tide coach Nate Oats pulled him afterward, and Quinerly watched on as Alabama clinched its berth into the Sweet Sixteen.

Still, his presence was there for all to see. With 14 points and 11 assists off the bench, Quinerly was the talisman the Crimson Tide needed to outpace a gritty Terps team Monday night.

“He’s a super unselfish guy, we all know he can score the ball, but he’s a great facilitator, a great distributor,” Shackelford said. “He found the open guys today and he also found his own rhythm. He was huge for us.”