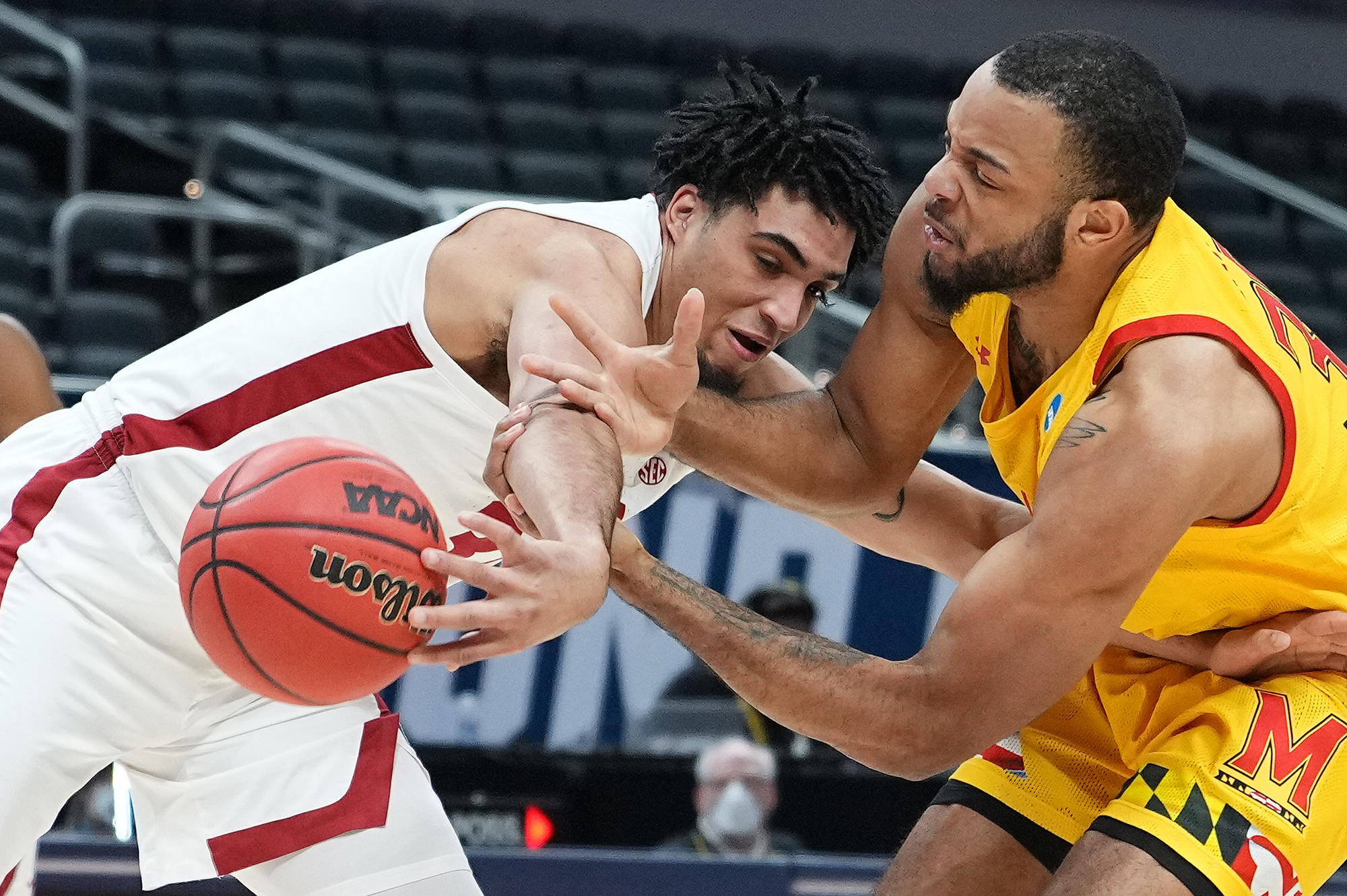 INDIANAPOLIS — Aaron Wiggins looked skyward. Eric Ayala stared at the floor. But as Maryland men’s basketball coach Mark Turgeon stepped out from the scrum, he found his senior captain, Darryl Morsell, and gave him a long embrace. The Terps’ season was over, defeat melding into resignation.

All the while, Alabama danced to the recorded sound of its marching band. John Petty Jr. pumped his fist. Jaden Shackelford screamed in delight. And as the buzzer sounded, the cheshire-like grin swept its way across the Crimson Tide bench, coach Nate Oats’ bunch delighting in its thrashing.

It had been that way long before the final horn sounded Monday night. Alabama pierced through Maryland’s vaunted defense, Petty and Shackelford among the rash of Crimson Tide players commanding the court. They rained down 16 threes en route to a 96-77 victory over the Terps that bounced Turgeon’s side in the second round of the NCAA tournament.

“We’re a good defensive team, but we were just a step slow all night,” Turgeon said. “I said before the game they were the fifth No. 1 seed in my mind, and they played like it tonight.”

That torching was unusual for Maryland (17-14), which surrendered the most points and threes it had all season. Alabama raced around Bankers Life Fieldhouse, flooding the net with make after make.

After the Crimson Tide bolted to an eight-point halftime edge, Oats’ side exploded in the opening minutes of the second period.

Petty sprinted past a cadre of gold shirts off a blocked shot and swished a three. Not even 30 seconds later, he did it again, forcing Turgeon to take a timeout.

But Alabama (26-6) kept coming. Shackelford found space off a miss and drilled from deep. Now desperate, the Terps started to force shots. But those misses only turned into more points for Shackelford, who roared after sinking yet another open three. In just over two minutes, the Crimson Tide blew open a single-digit contest to a 23-point margin.

“It’s definitely something we haven’t seen before,” Morsell said. “They came in locked in, had a great game plan. They have great spacing on their drives. They look to attack mismatches. They found a rhythm.”

While Maryland turned in one of its best shooting performances of the year — going 53.3 percent from the floor — and Wiggins established a new career-high with 27 points, it could not withstand the Alabama onslaught. Wiggins and Jairus Hamilton splashed triples, only to be countered by fadeaway longballs from Shackelford and Jahvon Quinerly.

It kept spiraling for the Terps. Shackelford and Joshua Primo both laid it in from close range. Quinerly spun around in the paint and watched the ball fall through, part of his double-double as he racked up 14 points and 11 assists. And Petty hit another fastbreak three for good measure.

One of the most methodical teams in the country was out of its element against the speedy Crimson Tide, and it had no answer.

“They were all making shots, it’s hard to come help,” Turgeon said. “I think it took our mojo a little bit when they just kept making them.”

So, as one final Petty three dented the scoreboard, it closed an unusual season in disappointing fashion for Maryland.

The defensive intensity and scrappiness that had defined its unexpected run to the NCAA tournament finally broke down against Alabama. The threes rained throughout both halves, and the Terps simply couldn’t keep up. For the first time in weeks, Maryland looked like a team punching above its weight.

A night that started with so much promise ended in tears and dejected hugs for the Terps. Still, as they trotted off the court for the final time this season, their minds raced back to all they accomplished. An undersized, undermanned squad pegged to finish in the bottom half of the Big Ten scrapped their way to Indianapolis.

They reinvented themselves twice over, changing their style of play, adjusting to more talented opposition. They stopped some of the nation’s best from scoring. They found ways to get buckets from a limited offensive group. They battled back from a 1-5 start in Big Ten play.

So, when the end came, it may have been inevitable. But this group was far from the afterthought many perceived them to be.

“I told our guys, don’t let this night ruin what you accomplished,” Turgeon said. “There’s only 32 playing this week, this last two days, and we were one of them. And it was supposed to be a rebuilding year.”

“It’s the grittiest group of guys I ever played basketball with,” Morsell said.