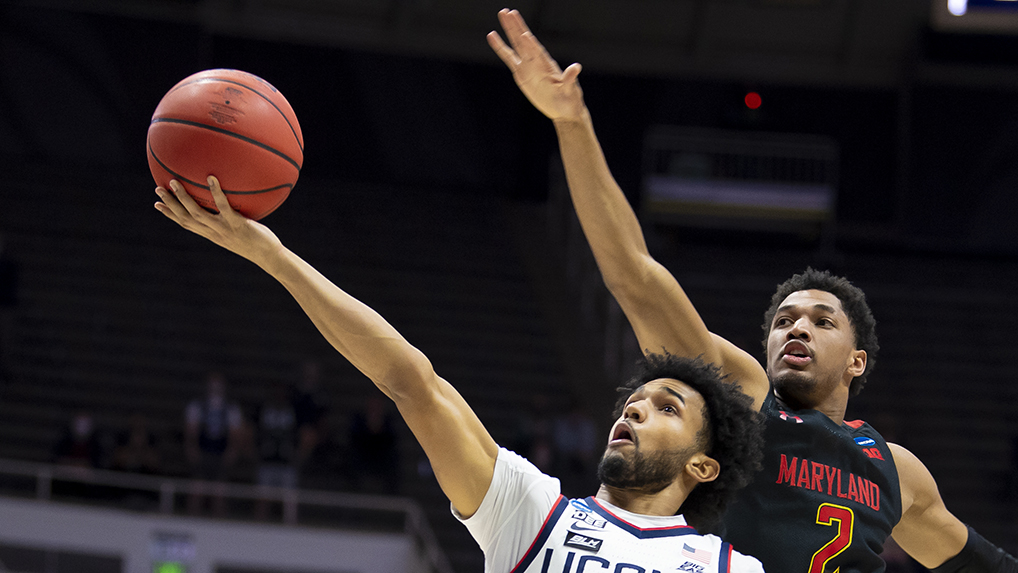 Maryland's Aaron Wiggins attempts to block a layup by UConn's Jalen Gaffney during the Terps' 63-54 win over the Huskies on March 20, 2021. (Photo by Andy Hancock/NCAA Photos/NCAA Photos via Getty Images)

INDIANAPOLIS — Darryl Morsell would not let Maryland men’s basketball lose its lead. With just over three minutes left in the game, the guard had just sent UConn sharpshooter James Bouknight to the free throw line, who was looking to cut his team’s deficit to four.

But the shot bounced off the rim and into the Mackey Arena air. And Morsell atoned for his error, soaring above the mass of crashing bodies to snag a critical rebound and set the Terps back on track. On the other end of the floor, he found Eric Ayala, who barreled his way to the glass and drew a foul on Bouknight.

The sequence was emblematic of the grittiness coach Mark Turgeon has developed with this Maryland squad. While the Terps may not be as flashy as in years past, their ability to wear down opponents and grind out physical victories has carried them all season.

Now, it’s landed them a victory over the Huskies and a spot as one of the final 32 teams standing in the NCAA tournament.

“Our talent level’s not where it’s been,” Turgeon said. “But our toughness is at an all-time high.”

Perhaps no players embody that scrappiness more than Morsell and Reese Mona. Morsell’s defensive acumen is well-known at this point, culminating in his Big Ten Defensive Player of the Year title.

His toughness and tenacity — developed in Baltimore — has led to assignments locking down opponents’ top players. On Saturday evening that was Bouknight, who ultimately tallied 15 points on an inefficient 6-of-16 shooting.

But Mona has been a more understated threat. The former walk-on has blossomed into a rotational player, buzzing around the floor to pester opponents on defense. Though he only averages just over six minutes of action every game, Mona’s active hands force turnovers, and his quickness draws fouls.

Even when he doesn’t impact the stat sheet, Mona’s style kick-starts his Maryland teammates. In Saturday’s contest, the Terps were being manhandled on the boards, surrendering 15 offensive rebounds to the Huskies in the game’s first 15 minutes. But Mona entered and battled down low, boxing out Isaiah Whaley and Tyler Polley to clear the way for his teammates to secure the rebound and push the pace up the floor.

“Reese went in there, and he’s giving up eight inches, ten inches, and he’s sitting on the guys’ legs out and pushing him out,” Turgeon said. “Maybe that rubbed off on the rest of us.”

That appeared so. Maryland kept UConn off-balance, forcing many sharp-angle shots that did not fall. Donta Scott swatted two close-in jumpers from Tyrese Martin out of the way in the final minute of the first half, too. And in the second 20 minutes, the Huskies managed just four offensive boards, the Terps eliminating their opponent’s biggest advantage.

As it has all season, that defensive ferocity kept Maryland afloat even when the offense was not clicking. But in the spurts when the Terps found rhythm with the ball in their hands, they converted from all over the floor to pad their edge.

“When we rely on our defense, we get stops even if our offense isn’t going for us,” guard Aaron Wiggins said. “When our offense is going, it adds another spark.”

Now the challenge is keeping up that fight. Maryland faces No. 2-seed Alabama on Monday, a significant step up in difficulty from UConn.

While the Crimson Tide don’t present a size mismatch, they push the pace and fill it up from deep unlike any team the Terps have faced this season. Led by Jahvon Quinerly’s 44.9 percent mark from long range, they average 10.5 made threes per game, good for fourth nationally.

So, Maryland will once again play the role of underdog. But the Terps are used to it by now, clawing their way through a grueling season by relying on their scrappiness. And it could prove to be fruitful once more.

“Nothing has ever been easy or given to us,” Morsell said. “That’s who we are, and we gotta continue to be tough.”