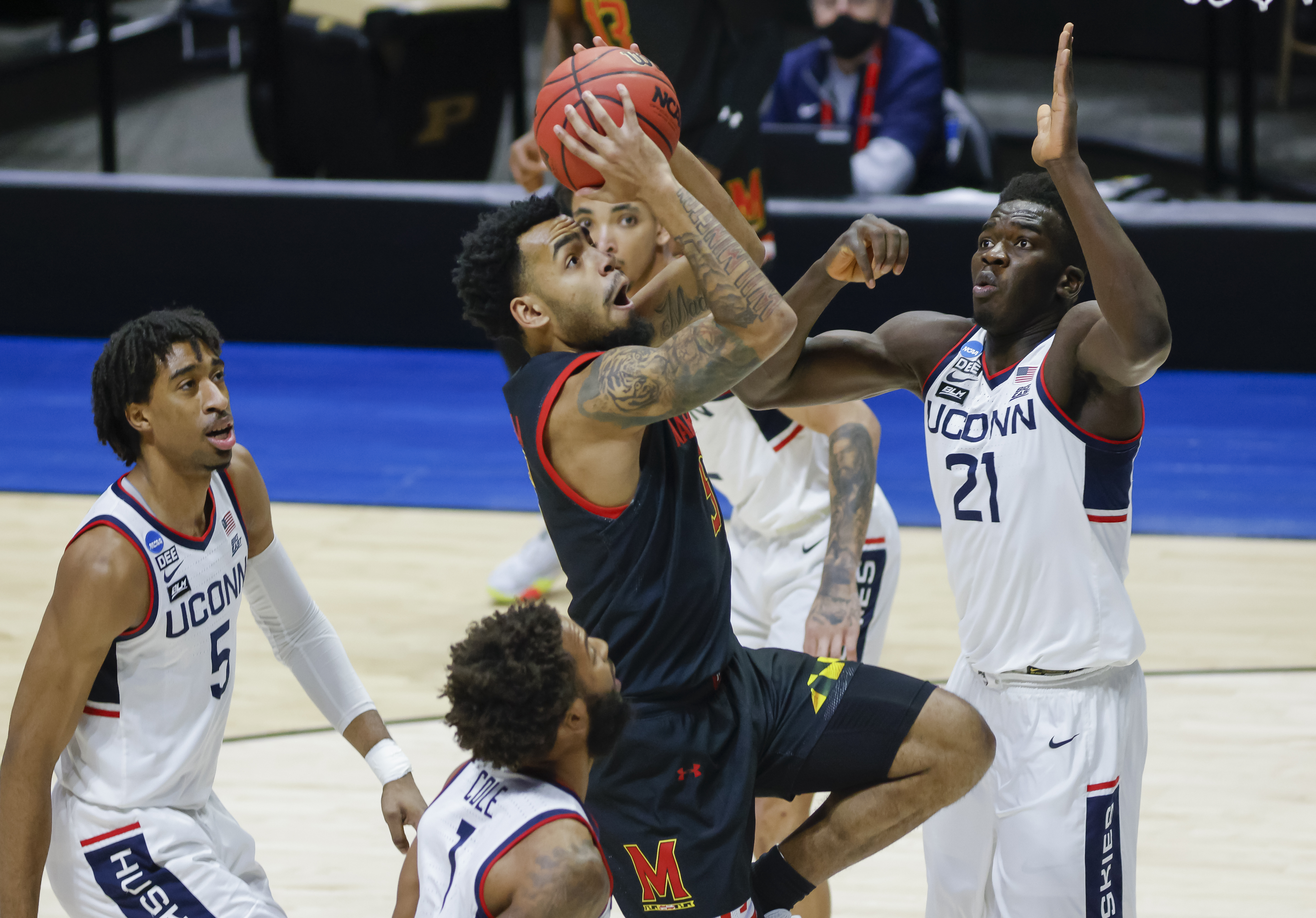 WEST LAFAYETTE, Ind. — Eric Ayala’s lane to the hoop closed quickly. Two white jerseys beared down on the Maryland men’s basketball guard, who was looking for points to stave off a late UConn charge.

But Ayala saw Hakim Hart cutting in from the backdoor, the sophomore sensing trouble. Ayala kept calm, not trying to play hero. He dished to a cutting Hart, who rose for the lay-in.

It was classic Ayala. The junior stayed quiet, calm and confident as he led the 10th-seeded Terps to a 63-54 win over the seventh-seeded Huskies in the first round of the NCAA tournament Saturday evening.

That bucket helped stem an 11-3 run from UConn, which had closed a double-digit deficit to just five with under three minutes to play on a James Bouknight jumper. But after that bucket from the Huskies’ ace — two of his 15 points on 6-of-16 shooting — Ayala delivered.

He crashed to the rim on the ensuing possession, drawing contact and sinking both free throws. Bouknight then missed a foul shot, and Ayala rose above the scramble to secure the rebound, taking it the other way. Then, the assist to Hart, whose bucket gave Maryland (17-13) a more comfortable eight-point edge with just over a minute remaining.

And Ayala got it done on the scoreboard, too, beginning with the Terps’ second possession.

He rolled open off a screen for a triple, Maryland’s first long ball of the evening. Then, the Wilmington, Delaware, native worked in the paint on three separate occasions, scrounging for points as he worked past UConn’s interior.

Ayala added to those 14 first-half points in an early second-half flurry, keeping the Huskies at length. He hit the glass for two points, laid another one in and jabbed Tyrese Martin out of the way for a three. That last bucket sent the Terps to a 14-point edge, their largest of the day. He finished with a game-high 23 points.

“It’s do or die at this point. You’ve gotta leave it all out there, empty the tank,” Ayala said. “I wasn’t ready to go home today.”

All the while, UConn (15-8) could not convert its offensive chances as Maryland clamped down. Though the Huskies, a top-10 team nationally in offensive rebounding, showed their muscle on the glass, they rarely saw results.

UConn only recorded 11 second-chance points on 22 offensive boards, part of a season-worst 32.3 percent shooting. The Huskies’ 54 points were also the fewest the team tallied all year.

“We changed [some] things defensively that helped us keep inside position on the boards,” Turgeon said. “Our guys started to box out long shots and long rebounds.”

That allowed the Terps to stay in front even as their offense wavered. But when Maryland found rhythm, UConn had no answer.

The Terps went on a 15-3 run in the final 7:32 of the opening half to take an 11-point lead into the break, demoralizing the Huskies. Aaron Wiggins cashed from long range, Darryl Morsell did the same and Donta Scott slashed to the rim for a bucket off a slick feed from Hart.

Those high-flying offensive theatrics carried into the opening minutes of the second period, with Wiggins and Scott each soaring through the sky for one-handed jams. But as that production faded late, Maryland turned to its stalwarts — Ayala and the defense — to overcome a feisty UConn side.

And as Ayala pulled down one last heave from R.J. Cole and dribbled out the clock, he couldn’t help but celebrate with his bench. He’d helped the Terps stay alive, fighting for another opportunity to build on a season that looked lost a few months ago.

“A lot of people didn’t think much of us,” Ayala said. “No matter what people, barriers and stuff they try to put on me or my team, all year we’ve just been fighting.”