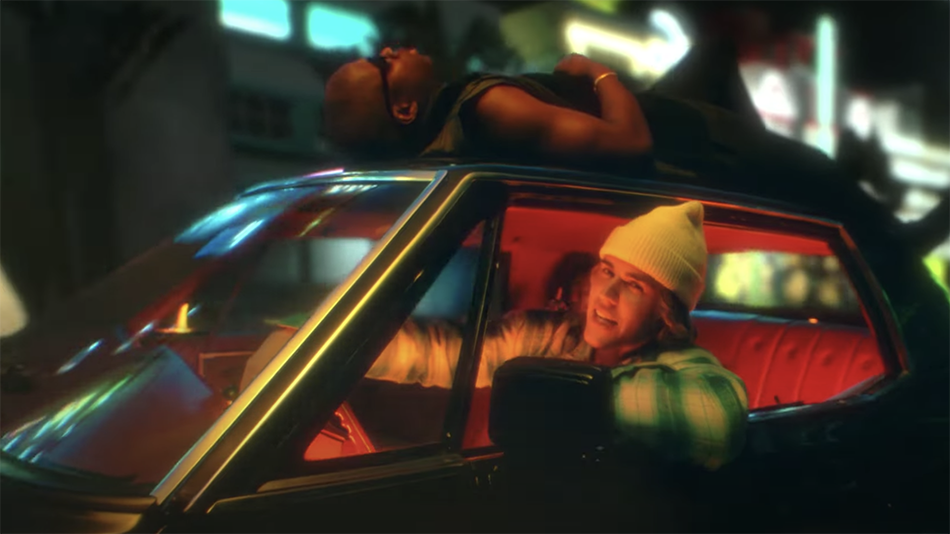 Justin Bieber in his music video for "Peaches." (Screenshot via YouTube)

A lot has happened leading up to the release of Justin Bieber’s sixth studio album, Justice. Bieber performed a soulful Tiny Desk Concert, was sent a cease-and-desist by French electronic duo Justice because of his album’s typography and fell into controversy over putting two Martin Luther King, Jr. excerpts on the album.

Justice — released a little more than a year after his last album, Changes — exists in two extremes: genuineness and platitudes.

The album starts out strong with “2 Much,” a piano track that lays under Bieber’s passionate voice, singing about the love he has for his wife, Hailey Bieber. These confessions about how he’s enamored with the small things about her set a heartwarming precedent for what’s to come in the album.

It’s also why the song’s opening sample of a MLK speech feels jarring, as none of Justice is about injustice or activism. The speech’s inclusion feels like grasping at straws, even though Bieber has donated to multiple organizations “in honor” of the album.

[Clubhouse isn’t user-friendly, but that may not be a bad thing]

The guitar-heavy “Off My Face” is a standout. Bieber’s voice over the strumming is breathtaking, and the lyrics are full of metaphors for being in love. Though sometimes bordering on sentimental, “Off My Face” gets away with it as a refreshing contrast to the album’s cliche and unstimulating songs (see: “Deserve You” and “Somebody”). This track is in the same lane as “Lonely” — full of narrative and raw emotion.

Justice is full of collaborations (nine to be exact), including Khalid, Chance the Rapper, The Kid LAROI, Dominic Fike and Daniel Caesar, among others. Bieber’s song with Fike, “Die For You,” is his try at ’80s synth pop, and it’s full of cliches about dying for your partner because … love. The worst thing is that Bieber and Fike aren’t even bad on the song — it’s just mediocre. How it took five people to write this song is beyond me.

“Peaches” is hands down the best track on the album. The closest thing we’ll get to a revival of Journals (at least for now — I still have hope), “Peaches” is full of magical features. Daniel Caesar and GIVĒON’s smooth vocals glide over the groovy keyboards and R&B drums. The song immediately shows its ability to be looped for hours on end through its catchy chorus. The music video is equally as interesting, full of neon visuals and quality fashion styling (see: Bieber’s puffer coat and salmon-colored suit).

Infused with reggaeton influences, the track “Loved By You” has a bouncy beat reminiscent of songs on Purpose, with an infectious melody that lets Bieber and Burna Boy’s voices take the main stage. Justice would be stronger if more of its songs were like this.

“Love You Different” also stands out, doing simplicity the right way. The production includes a hollow keyboard and few instruments, and it comes alive with BEAM’s feature. My few gripes with this track are that it ended abruptly and, in addition to other songs on the album, is too on the nose. Bieber proudly sings, “Under covers ain’t no rubbers/ On this planet, I’ll treat you like a mother (Let’s make babies),” which is vomit-inducing at best.

[Let’s replace the tired classic movies with these films]

This lack of subtlety is heard when referencing his religious beliefs as well. Bieber (and in one case, The Kid LAROI) mentioned God on four tracks on the album. While not inherently bad, it’s just so direct. Ironically, the song “Holy,” featuring Chance the Rapper, focuses more on relationships and creates a wishy-washy metaphor with religion.

The most controversial track on Justice isn’t even by Bieber. “MLK Interlude,” lasting one minute and 44 seconds, is an excerpt from one of Martin Luther King, Jr.’s sermons, “But If Not.” Many people found this off-putting, although Bernice King showed Bieber support on Twitter for this album and his involvement with the Martin Luther King, Jr. Center.

On an Instagram post that announced the album, Bieber wrote a lengthy caption about its meaning. “I know that I cannot simply solve injustice by making music but I do know that if we all do our part by using our gifts to serve this planet and each other that we are that much closer to being united,” Bieber said. “This is me doing a small part. My part. I want to continue the conversation of what justice looks like so we can continue to heal”

While I’m not a personal fan of the inclusion of MLK in something that has nothing to do with civil rights or activist initiatives, I will give Bieber credit for at least donating money to helpful organizations. But this is only slightly better than David Guetta’s George Floyd tribute.

Justin Bieber’s Justice is a lot of things. At times, it is bloated, cliche and overproduced. At others, it is reserved yet powerful. Overall, Justice feels like it’s missing direction and trying to appeal to everyone while wrapped in a pseudo-social awareness message. I’m hoping whatever Bieber does next, it involves less background noise.