Let’s replace the tired classic movies with these films 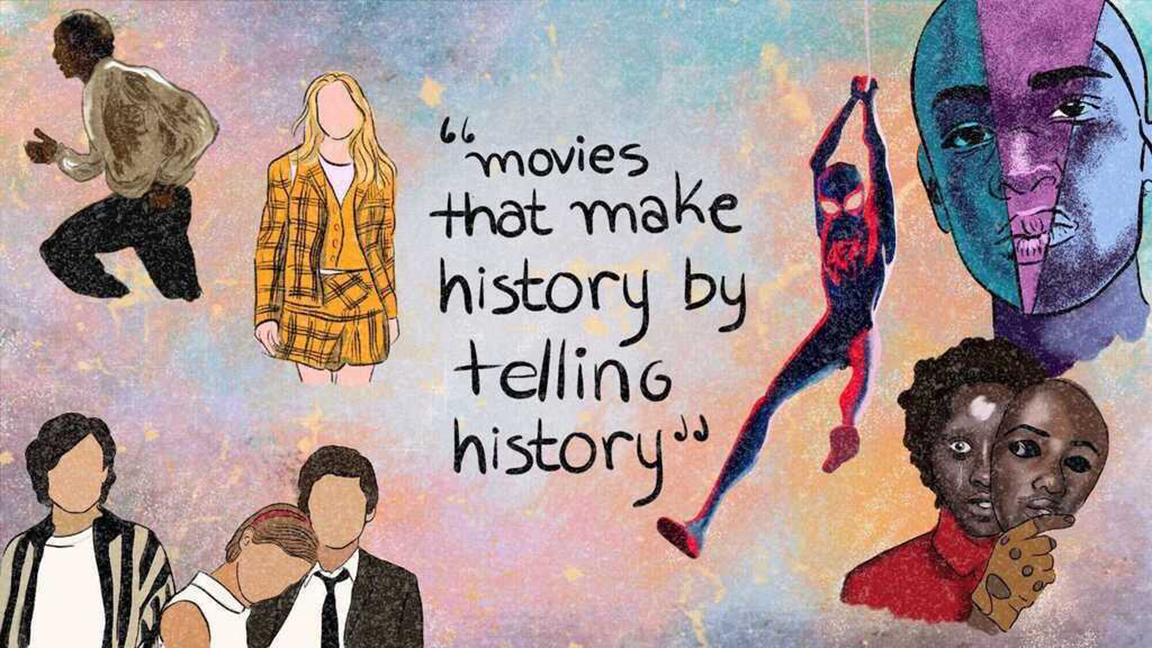 “You haven’t seen [insert well-known movie here]?!” is something I hear a lot.

With a lot of anxiety and a short attention span, I generally opt to rewatch New Girl episodes for the umpteenth time over trying out a new movie. And when I do watch movies, I have the horrible habit of looking up its plot synopsis beforehand to avoid stress while watching it unfold.

Because of my movie-watching aversion, I constantly feel left out of pop culture. So I decided to make a change; propelled by pandemic boredom and blind confidence, I set off to watch the “Top 100 Movies” according to a random poster from Amazon. What qualified this list and its title was unclear. Regardless, it was my 2021 resolution: 100 movies, no prior research and an open mind.

Well, it’s three months into the year, and this challenge has broken my spirit. But the problem isn’t the challenge itself. It’s the list.

The poster’s vague product description tells you it’s “filled with films loved by both fans and critics worldwide — from influential classics to modern blockbusters and award-winning animation.”

You know what it doesn’t tell you? Out of 100 movies, nearly all of them are directed by white men.

I shouldn’t have just lazily bought the first “top movies” list I could find on the internet, and I should’ve done more research about great new films. But I also wish things like this poster would stop putting this kind of content on a pedestal — this list shouldn’t be the default. We have to spend more time questioning why classic films are held in such high regard.

The film industry — just like the rest of the world — is run by a select group of mostly white men, who are churning out content geared toward them and then holding that content up as “better” than the rest. We have to stop pretending that’s true.

I’m a firm believer that watching movies is a productive and enjoyable way to learn more about the world around us, and I think that sometimes new movies are disqualified from being classics, just because they’re labeled “contemporary.”

Classics, especially old ones, were created without the levels of accountability we now expect in media and society. That’s why Disney+ has put viewing restrictions and content advisories on some of the Disney classics, including Dumbo, Peter Pan and The Aristocats.

A classic should stand alone. It should tell a new story of a new person. It should be created, directed and produced by the people it pertains to. It should represent different identities, perspectives and places. It’s these movies that make history by telling history; these are the ones that everyone should see.

So, after some frustration and a lot of reflection, I set off to make my own list with the help of my colleagues at The Diamondback. Maybe they tell our stories indirectly, maybe they made us think differently, or maybe they’re just really great movies more people should see.

This is by no means an exhaustive list; there are countless incredible creators with stories to share, and I invite all of you to seek those stories out instead of just settling for the norm. But this is a good place to start. — Emma Grazado, deputy engagement editor and diversions writer

Spider-Man: Into the Spider-Verse (2018), directed by Peter Ramsey, Rodney Rothman and Bob Perischetti

To preface, I don’t like superhero content, nor have I ever understood it. But this movie had me laughing, crying and fixated on the complex world of Spider-Man. The animation is unprecedented, simultaneously realistic and abstract. It maintains the classic narrative of Spider-Man with a fresh, modern twist, featuring a soundtrack with Post Malone, Nicki Minaj and other great stars. It also won the Oscar for Best Animated Feature, making Ramsey the first Black winner in the category.

This film is an emotional coming-of-age tale centered on the titular character’s path to self-discovery, all while juggling school, a social life and a rocky relationship with her mother. This movie’s authenticity in tackling the trials of a high schooler makes it a classic: arguing with parents over college choices, craving individuality at the same time as social acceptance, wanting to leave your hometown. Lady Bird can be frustrating to watch at points because of how blunt it is, but the genuine introspection makes s it all worth it.

Perks of Being a Wallflower (2012), directed by Stephen Chbosky

No quote has ever stuck with me more than, “We accept the love we think we deserve.” Set in the early ’90s, this heart-wrenching coming-of-age film takes us into the life of freshman wallflower Charlie. Through diary-like narration, Charlie distantly relays experiences with his sister’s domestic abuse, the suicide of his best friend, his depression and obsessive thinking, the escapism of drugs and partying and more. This film encapsulates the suffocation that comes with trauma in an era that was just beginning to address these topics.

This coming-of-age film takes place across the lifespan of Chiron, a Miami-born Black man who struggles to come to terms with his upbringing and sexuality, as well as the physical and emotional abuse leveled upon him. The movie shifts between shades of pastels, and it became  the first film with an all-black cast to win the Academy Award for best picture.Through a tale of self-discovery and rebuilding bridges, this film makes waves for Black and LGBTQ individuals, telling a story riddled with mistreatment and reconciliation.

This film takes its title from a Peking Opera play and fittingly, it’s a classic adorned with bright makeup and a dusty theatre palette. Set amid the political turbulence of 1900s China, this film is at its core an attestation of humanity in all its forms, including gender fluidity, queerness and sacrifices in the name of art. Visually, it’s a stunning love letter to cultural tradition while also conveying the whole scale of human emotions, from love to jealousy to desperation to recognition. Though a tragedy, there’s bittersweetness in its depiction of resilience in the face of impossible circumstances.

Elaine May’s Mikey and Nicky was buried by Paramount upon its release, and May is even said to have hidden film from the studio at one point to prevent it from taking control of the edit. Despite its tumultuous production, the film completely holds its own with the other crime movies of that time. It’s a gritty examination of toxic male friendship, as anxiety-inducing as Uncut Gems and even darkly funny at some moments. It deserves to be seen as a crime classic.

Jordan Peele is not a stranger to horror. In Us, the second movie he directed and wrote, Peele delivered a multilayered horror film starring a majority Black cast. The film did not give the same story of police brutality and slavery that Black characters are often reduced to, and not only did it have amazing actors including Lupita Nyong’o and Winston Duke, the movie also gave us a new horror story that was so different from the usual jump scares in the seemingly endless stream of Conjuring-s and Paranormal Activity-s. The entire concept of tethereds was so freaky and impactful that I reference it at least three times a day. Composer Mark Abels’ work was out of this world. His edited version of  Luniz’s “I Got 5 On It” lives in my brain. With all of the talent in this film and the very unordinary concept, Us is definitely a classic horror movie, and if you disagree, then maybe that’s just your tethered talking.

John Waters was a revolutionary for the time. He was an openly gay director who seemed to have no care for what the straight world thought of him. His movies challenged the status quo and celebrated communities that were often underrepresented in the media. He famously featured drag icon Divine in almost all of his films before Divine’s unfortunate passing. Some of his work is a little more raunchy, such as the famous scene in the 1972 film Pink Flamingos in which Divine eats dog poop, but this film is more mild. The film follows the classic story of a girl from the right side of the tracks who falls for the boy from the wrong side but with Waters’ classic demented twists and turns. — Evan Hecht, diversions writer

[Quarantine Obsession: The best part of my day is my egg on toast]

Clueless as a classic? “As if.” But the film following the life of Beverly Hills it-girl Cher Horowitz is actually a brilliant reimagining of coming-of-age movies. In Clueless, Heckerling arms Cher with an impeccable closet and iconic wit. And though Cher appears shallow at surface level, Clueless is timeless satire about the excess surrounding Los Angeles elite. The movie is also inspired by Jane Austen’s novel Emma and remains one of the best Austen adaptations.

There are few queer films as iconic as this documentary, which depicts New York City’s drag ball scene in the mid-to-late 1980s. It’s incredible to see the performers’ passion as they dress to the nines and confidently walk the “runway” even though in the real world they may be struggling just to find food or a place to sleep. These glamorous balls are juxtaposed with interviews of the performers, who discuss how drag gives them a community and a sense of belonging, helping them cope with issues such as AIDS, racism, transphobia, homophobia and poverty. You can see clear influence from the documentary in shows like RuPaul’s Drag Race and FX’s Pose, showing how impactful it still is, 30 years later.

This film is a unique take on the events of  World War II in Germany. When the movie was released in 2019, I went into the theater with major skepticism, as I thought a satirical approach to an event as horrifying as the Holocaust wouldn’t be appropriate. The story focused on Jojo (Roman Griffin Davis), a young boy growing up in Nazi Germany. Jojo is at first determined to fit in by complying with the white nationalist propaganda going on around him. However, he ends up befriending a Jewish girl, Elsa (Thomasin McKenzie), who Jojo’s mother is hiding in their attic. The story becomes moving and deeply impactful as Jojo and Elsa’s relationship grows. The message of the movie was not simply a satirical take on the Holocaust — it was about fighting against propaganda and being on the right side of history, no matter the stakes. Although Waititi’s approach was a slippery slope, I felt appreciative of the movie and moved by its message.

This historical drama is based on the true story of Solomon Northup, a violin player who lived in New York with his family in the 19th century. Despite being a free Black man, Solomon (Chiwetel Ejiofor) was captured in 1841 when he traveled to Washington, D.C., for a violin gig. The film follows Solomon over the next 12 years while he was enslaved in Louisiana. McQueen does not stray from the horrific truth of slavery in the South and his film provides an important look at the monstrous systems that allowed for slavery to continue for centuries. Along with winning best picture at both the Academy Awards and Golden Globes in 2014, the story was emotional, horrifying as well as inspiring. It is an absolute must-see, especially for those concerned with acknowledging the racism embedded in American history. It educates the viewer on the dark history of slavery in this country that is too often glossed over or ignored.