Quarantine Obsession: The best part of my day is my egg on toast 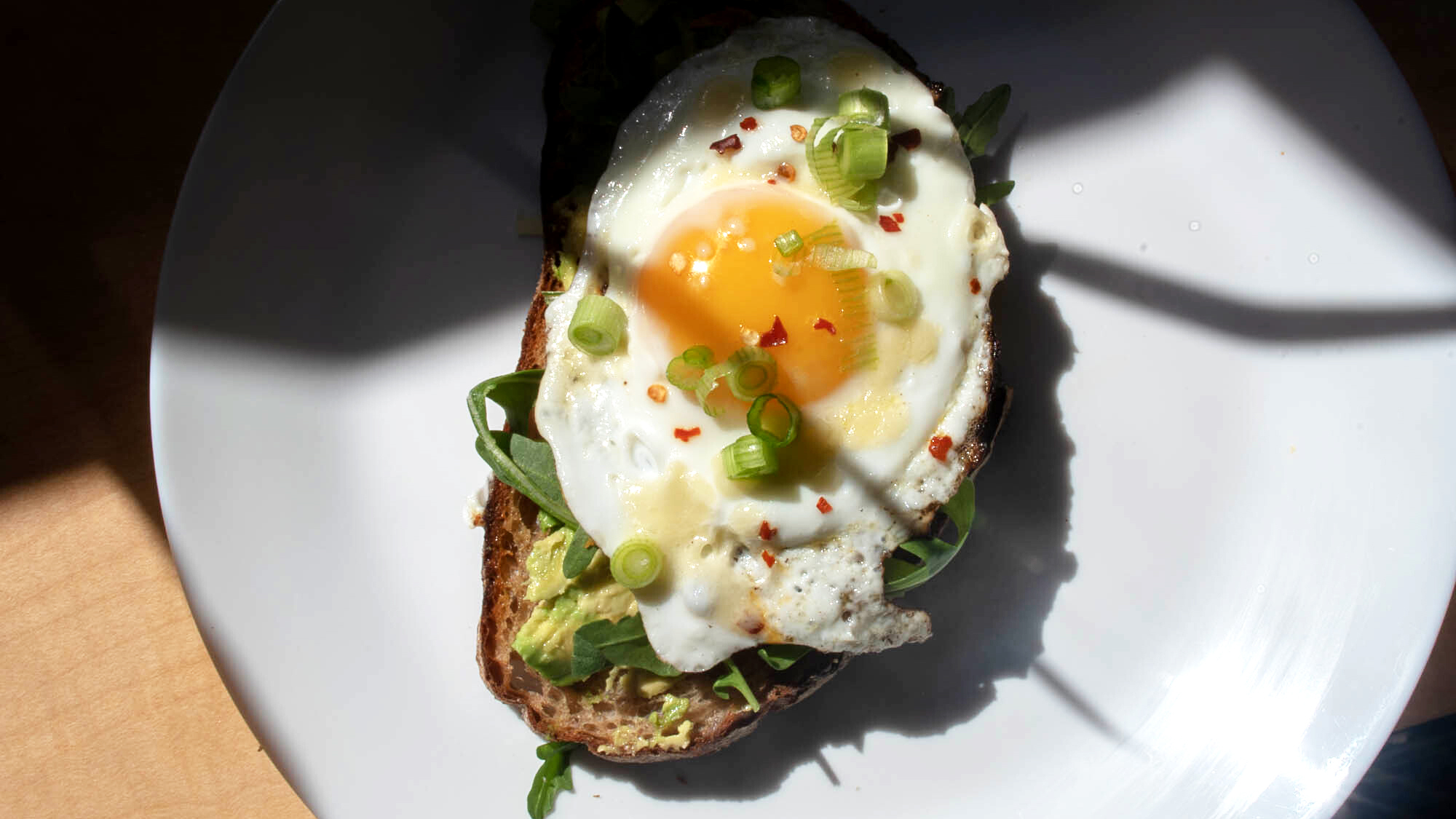 The Egg. (Elana Morris/For The Diamondback)

We all graft our own meaning onto music, but I believe this song was objectively written for me and my egg.

No, the egg on toast is not elaborate, nor is it remotely impressive or particularly original, but it’s the reason I get up every day. For approximately seven minutes out of the 16ish hours that arbitrarily define my day during pandemic life, I am completely at peace — and that is when I eat my egg.

The egg on toast is precisely what it purports to be. It offers zero surprises. But done perfectly, it is what I imagine heaven feels like: endless round yellow yolks dancing freely through a web of wispy cumulus clouds; crispy buttered bread, multiplied a million times over like a mouse trail. When I die, I will ascend to the infinite egg sky.

I hope I have convinced you, and I apologize to all vegans and egg haters. This is how I make my egg.

First and foremost: butter. We are making a luxury egg, so you might consider buying salted Kerrygold butter. It comes in one large block, wrapped in gold foil. It has a higher milk fat content than regular butter, and when I see the gold block in my fridge, I feel like I am Charlie from Charlie and the Chocolate Factory himself.

Take your butter out of the fridge an hour before you cook your egg. Yes, I know I am insane to suggest that kind of culinary foresight for something as mundane as an egg. But you didn’t come here for a regular old recipe, did you? You came here for controversy.

Second: bread. It’s up to you, but make it fancy. Ciabatta, a nice Tuscan loaf, a multigrain, a baguette. Anything that makes you say, “Wow, that is a good carb.”

And the egg? We’re frying it.

[Eyes Chips Face: The confusing collaboration between e.l.f. and Chipotle]

Pop your bread in the toaster. And while that’s crisping up…

Melt a pat of butter in a medium-sized pan over medium heat. Once the butter is melted and frothy, shimmy it around, and crack The Egg in the pan.

With the remaining space in the pan, drop in a handful of spinach and a bunch of cherry tomatoes. Season with your preferred spices — I am partial to Goya Adobo, though I am morally conflicted over Goya CEO Robert Unanue’s continued claims that President Joe Biden’s victory over former President Donald Trump was “unverified.” Work out your moral quandaries as you see fit — I plan to ignore my own until I finish my current Adobo bottle, whereby everything will fall apart.

You can also try incorporating a spoon of harissa with your greens — I’ve been experimenting with it lately.

Move your greens and tomatoes aside and retrieve your now-slightly crisp toast from the toaster. Re-butter the pan if necessary and place the bread in it. Fry on both sides, making sure the butter doesn’t burn. If you’re adding avocado, take the bread out and spread the avocado now.

Wait until the egg white is solidified, and season accordingly. If you wish, grate a bit of cheese over it. The entire cooking process should take about five minutes. When the egg white is solidified and the yolk is still a bit translucent, place a lid over the pan and let everything steam for about 30 seconds to a minute. The egg yolk will develop a delicate film, and the tomatoes will blister and sweeten. The spinach will just be spinach — it doesn’t have that much to offer.

Now, the time crunch. You have very little time to put it all together before the toast loses its crispness and the egg whites burn at the bottom. Feel the panic. Really feel it.

Plate the toast, then the egg on the toast. Arrange the tomatoes and spinach on the side of the plate.

If you didn’t cook any spinach, I guess you don’t care about your health, huh. Just kidding — try arugula instead. Lay the egg gently over a bed of arugula, making sure not to break the yolk, and then on the toast. Thinly chop a scallion or two and scatter over the egg for drama.

Sprinkle a bit of salt and maybe some of the Elote mix, and add hot sauce if you want. I like Valentina.

Now, take your knife and run it right through the yolk. Amazing. It’s amazing. Now EAT IT!

It’s getting cold already, eat it. For seven minutes, want for nothing. Everything is OK.