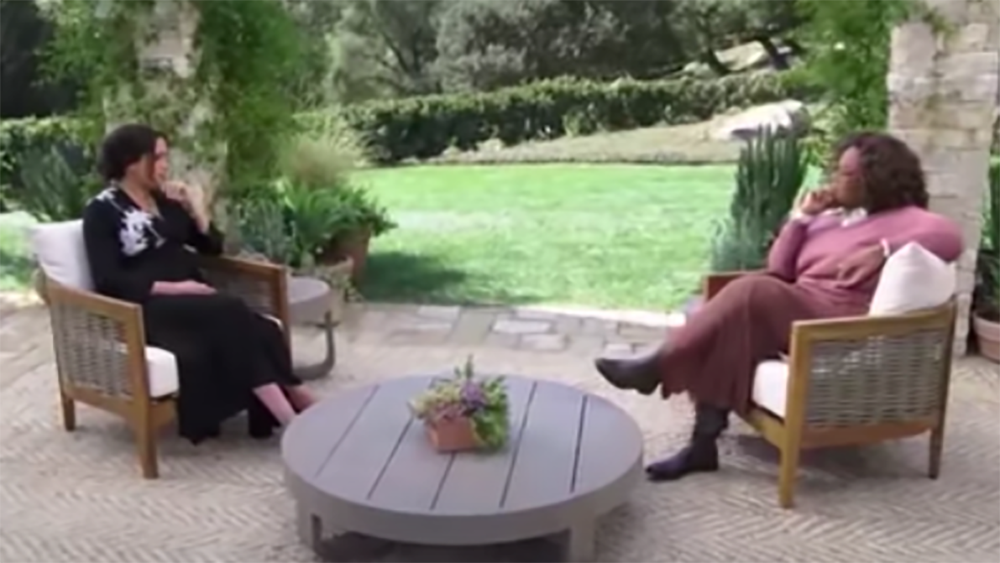 Meghan Markle during her interview with Oprah Winfrey. (Screenshot via YouTube)

Two days after Meghan Markle and Prince Harry’s bombshell interview with Oprah Winfrey — in which they levied serious allegations of racism, complacency and general cruelty against members of the British royal family — Buckingham Palace issued a statement:

“The whole family is saddened to learn the full extent of how challenging the last few years have been for Harry and Meghan. The issues raised, particularly that of race, are concerning. While some recollections may vary, they are taken very seriously and will be addressed by the family privately. Harry, Meghan and Archie will always be much loved family members.”

For starters, there’s no denying Markle was victim to racist press coverage. For the royals to not instantly and unilaterally denounce that, regardless of their fear of the press or whatever “invisible contract” might exist, makes them complicit in that racism. That’s like, day one shit.

You’ll notice the official response to the interview lacks the same motivation or indigence as another statement released last week that said the Palace was opening up an investigation into 3-year-old reports of bullying against Markle — widely considered a weak attempt to preempt what was coming during the couple’s tell-all. As a reminder, Prince Andrew, who was accused of being involved with Jeffrey Epstein’s sex-trafficking ring, didn’t even get a Palace investigation.

When I was in sixth grade, a girl at my school called another girl a slut, and we had to attend assemblies every day for a week on bullying and mental health. I highly doubt that Buckingham Palace will be engaging in the same level of reflection as my middle school.

One of the most striking parts of Markle’s conversation with Oprah was the obvious parallels with the words of the late Princess Diana, who gave a similar interview before her death caused by a paparazzi chase. Both spoke of extreme isolation, thoughts of suicide and self-harm, and being unprepared for the magnitude of media attention they would receive from British tabloids. Those who don’t learn from history are doomed to repeat it.

A structure that repeatedly drives its inhabitants to believe the only way out is killing themselves — and then demonstrates no honest acknowledgment of the factors that led them there — is irrevocably broken.

What’s even more ridiculous is the hypocrisy behind the Duke and Duchess of Cambridge, William and Kate, creating an initiative called Heads Together, which states in its mission statement that, “Too often, people feel afraid to admit that they are struggling with their mental health. This fear of prejudice and judgment stops people from getting help and can destroy families and end lives.” All the while, they apparently did nothing to remedy an environment that denied Markle any support after experiencing thoughts of suicide she described as “real” and “methodical.”

The royalty, known as The Firm, is one big pretense. Beyond not getting political or ever voicing any personal opinions, they want to pretend everything is fine all the time. I generally have little tolerance for that sort of incredibly manicured, inauthentic, tight-lipped stoicism, but especially during this pandemic which, for all the tragedy it’s caused, has at least given us license to be honest about how we’re really doing.

I understand that isn’t a universal belief; values of emotional vulnerability, individualism and openness about mental health are distinctly American and of my generation. And those values can sometimes be mutually exclusive with the tenants of duty, procedure and stability the royalty has operated on for 1200 years. But if there’s one establishment in the entire world that doesn’t deserve the magnanimity of cultural relativism, it’s the one that colonized 171 countries out of the nearly 200 that exist today.

In pre-bombshell interview times, no part of me — whether it’s my apathy as an American or contempt as an Indian with grandparents who were alive to lose everything during India and Pakistan’s partition in 1947 — has ever held an ounce of reverence for the British monarchy. It’s simultaneously archaic and dystopian; both a cosmetic vestige of an empire that has sustained its power through the horrors of colonialism and an establishment with the ethos of basically every evil government from any popular young adult fiction.

But what I find particularly insidious and especially damning is that it is an institution convinced that the key to its longevity is to repress or sacrifice any instinct of individuality, humanity or vulnerability. Meghan Markle threatened that game plan by not fulfilling her part as a cold, unfeeling automaton in the face of relentlessly cruel, baseless — and of course, racist and misogynistic — public evisceration from the tabloids, and Prince Harry threatened it by refusing to “be bullied into playing a game that killed [his] mum.”

In the interview, Markle denounced the narrative of a “hero and a villain.” She’s wrong, though. There is a very clear villain here: The British tabloid press.

In America, we’ve gone through our own recent reckoning over the brutal and unfair press coverage of Britney Spears, among other young women. Whether it’s a princess or a pop star, it’s a familiar story. This rhetoric has followed women for ages.

The media-public consumption industrial complex will scrutinize everything they do and crucify them, as Markle noted, just for “breathing,” The tabloids will create scandal where it doesn’t exist, manipulate and dehumanize their image, deprive them of their voice and diminish their intelligence, and then somehow call them attention seekers — pointing to their celebrity status and piles of money — when they try to defend themselves.

Many on the conservative right have also criticized Markle for supposedly victimizing herself and stirring attention when she just wanted to be left alone, as if she wrote a book and frequented the talk-show circuit. This ignores two key points. First, Oprah operates on higher journalistic standards than the so-called “royal experts” and anonymous sources and insiders that fuel most tabloid hit pieces; second, there is nothing convenient or comfortable about taking on massive, powerful structures.

The reality of living in a culture that so easily dehumanizes women is that you lose all control of how you’re perceived. And for all the people who support you, there will be many who absolutely despise you.

Among much of the sexist tabloid coverage Markle has received is her portrayal as the classic stereotype of a toxic wife, creating a rift between her husband and his family. Perhaps this is because the media wants to ignore that they’ve been the object of Prince Harry’s disdain long before Markle entered the picture. They’re likely the biggest perpetrator of the “toxic environment” Prince Harry said he was trapped in — one he asserts his father and brother are still stuck in.

The symbiotic relationship between the tabloid press and The Firm has caused too much collateral damage for a business model parading as journalism — while manufacturing most of its news for an institution that’s essentially obsolete and uninterested in reform. At this point, #AbolishTheMonarchy.