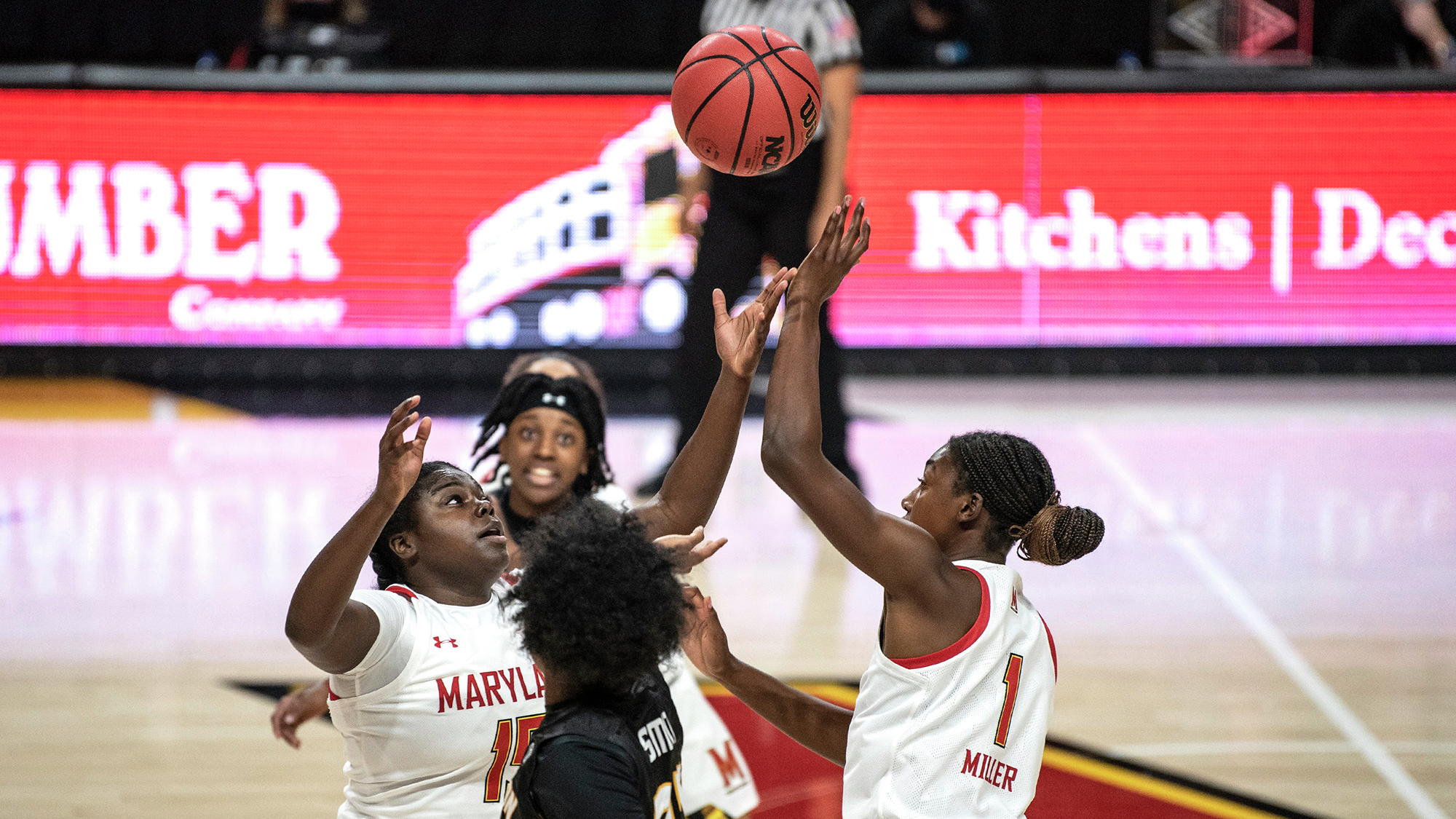 Right after Diamond Miller dropped off a pass to Ashley Owusu, she darted to the rim. Her No. 1 jersey turned into a white streak as she flew down the lane, throwing her hands up. She knew she was wide open.

She wasn’t the only one. Owusu knew it too, reading the defense and analyzing the play in an instant before bouncing a perfect pass right into Miller’s arms, who finished through a shocked Mount Saint Mary’s defense.

It’s the synergy between the two sophomores that has largely defined this season for Maryland women’s basketball, and it was the pair’s contributions that allowed the Terps to curbstomp the Mountaineers, 98-45, in the first round of the NCAA tournament.

“I just realized that off the dribble we were really effective,” Miller said. “So I just continued to do that and we were also really effective in transition. So just getting the rebound and trying to push.”

The pair combined for 39 points, 11 rebounds, and nine assists in their first ever NCAA tournament games. Owusu came just two rebounds and three assists shy of a triple double while Miller had 19 points.

“I thought they played like they have all season,” coach Brenda Frese said. “They didn’t make it bigger than what it should be.”

Despite being guards, the pair both showed prowess in the post, doing damage with their back to the basket. In the second quarter, Owusu went to work in her office.

The third team All-American played bully ball in the paint, looking for weaknesses in her defenders, or more often, her defender’s positions before exploiting those mistakes.

She also showed her mettle in the fastbreak, contrasting her power and dexterity in close areas with her grace and composure in the open court. Midway through the second quarter, she grabbed a rebound and immediately initiated a fastbreak opportunity.

As she passed midcourt and approached the free throw line, the ball was knocked out from behind and into the air. With barely a pause or hitch in her stride. Owusu moved forward to catch the ball and tossed in a soft right-handed teardrop.

“Teams as you can see, probably scouting for me to take the charge so just using the floater more often,” Owusu said.

On another transition opportunity, she caught the ball after Chloe Bibby blocked a Mountaineer’s shot. From there, Owusu and Miller had a near-clear path to a bucket with just one defender between them and the rim.

The point guard drove hard, drawing the defender in before dropping off a two-handed pass to her running mate, who finished with aplomb.

“You see that chemistry on the court,” Frese said. “I remember when Kristi Toliver and Marissa Coleman kind of had a neat combo like that.”

It was one of few clean looks Miller had on Monday. She went 7-of-11 from the field, mostly on strong drives to the basket where she not only experienced contact, but embraced it. In the open court, she invited defenders to bump into her, drawing fouls and making all four of her free throws.

Miller knifed through the defense, using her long strides to sneak through crevices in Mount St. Mary’s defense. When she’d get to the rim, her length once again played a factor, allowing her to finish over defenders.

On a day when other ranked opponents in the bracket lost or dealt with slight scares, the Terps never looked vulnerable, using their sophomore’s duo’s impressive performance to cruise past the Mountaineers and move forward into the round of 32.

“It’s exciting,” Owusu said. Every round, it gets better and better.”