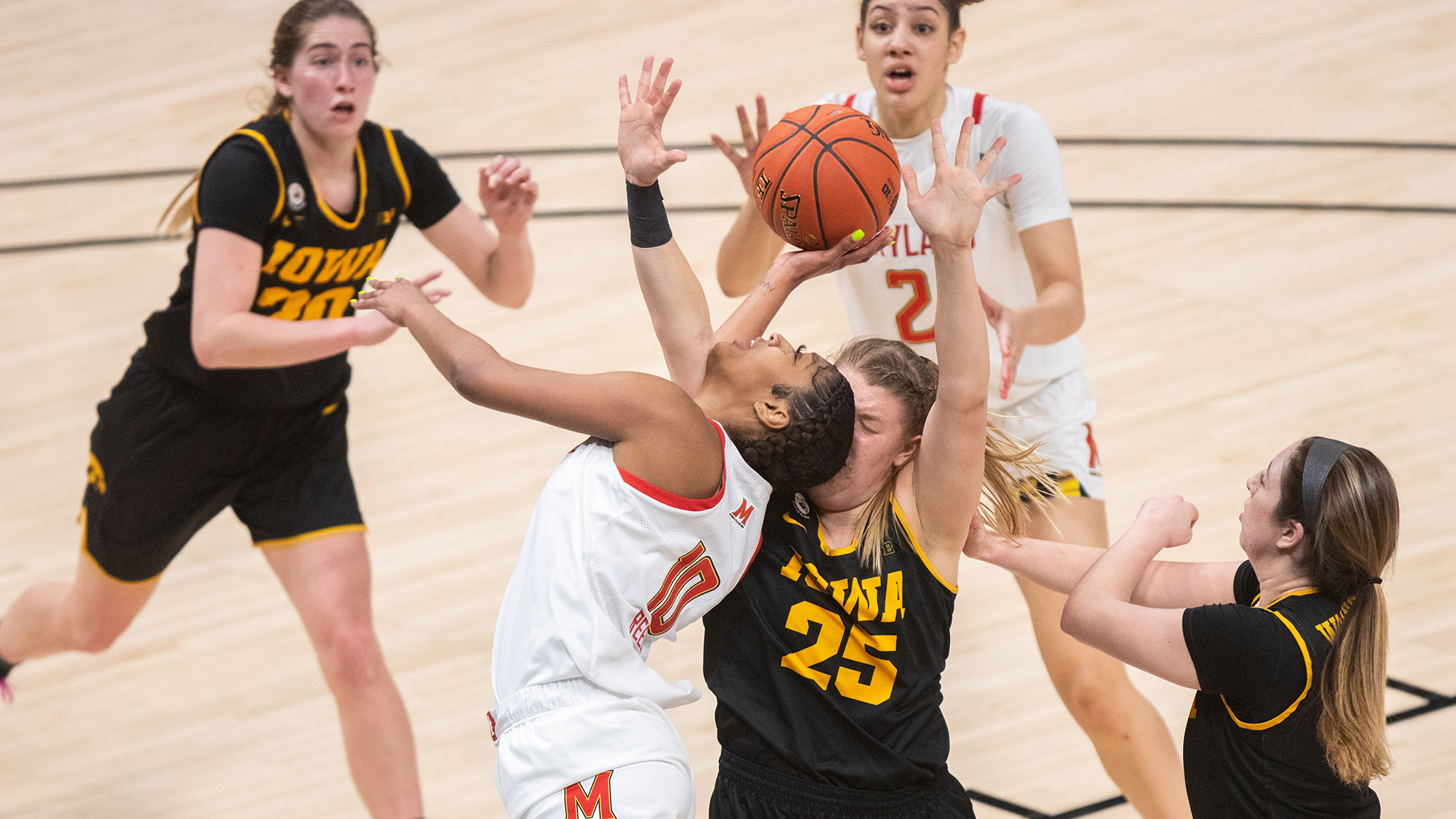 Forward Angel Reese goes up for a layup during Maryland women's basketball's 104-84 win over Iowa in the Big Ten Championship on March 13, 2021 at Bankers Life Fieldhouse in Indianapolis, Indiana. (Julia Nikhinson/The Diamondback)

When the NCAA women’s basketball tournament was featured across social media and news outlets, fans didn’t see a photo of Ashley Owusu knocking down a mid-range jumper or an audacious three-point attempt by Caitlin Clark. Instead, they saw a corner of a room populated by a mere rack of dumbbells and a table stacked with a few yoga mats.

It was representative of the subpar athletic accommodations for the women’s tournament in San Antonio, Texas, a conversation that continued when Oregon forward Sedona Prince posted a TikTok detailing other issues, including food that elicited grimaces from Prince and her teammate as they ate it.

The NCAA made amends with the weight room, but not before their initial accommodations provoked outrage from names across the women’s basketball landscape, such as Dawn Staley, Tara VanDerveer and multiple Maryland women’s basketball players.

“Being female athletes, we fight on a daily basis for equality and just the same treatment as the men,” forward Faith Masonius said. “It’s kind of just sad how facilities and food meals are kind of less than you expect being in a bubble.”

Masonius also said she found the food subpar but that Maryland has provided its players with a great deal of food, including snack bags from basketball performance assistant director Keith Pough.

“We just got to refuel our bodies,” Masonius said. “We’re used to eating two to three big meals, three or four big meals a day.”

Pough, who oversees the Terps’ strength, fitness and nutrition regimens daily, was not pleased with the lack of weightlifting equipment. He took to Twitter with his displeasure, posting clips of various former and current Maryland players lifting large amounts of weights.

Along with one clip of Ashley Owusu deadlifting a considerable amount, Pough attached the following caption.

Though the initial statement from the NCAA said that a lack of space was the primary reason for the limited exercise equipment, Pough said he found the practice area the NCAA provided to be larger than what he had to work with in College Park, where he has more than enough space to train the Terps.

“I think space is not an issue. I think it’s a matter of effort, and not being marginalized … as the women have always been, due to the systems and the powers that be,” Pough said. “They deserve just as much as the men do.”

Forward Angel Reese was outspoken about these issues as well, going on Instagram Live shortly after midnight Thursday. Along with saying there could be a 30 For 30 documentary on this situation, Reese also stated she could pick up the five-pound dumbbells “with my toe” and was displeased with the situation. She expanded on those feelings later that day.

“Some of the girls on the team can lift 300 pounds. You giving us 30 weights is not going to do anything for us,” Reese said. “I mean, we’re gonna be here for three weeks, so just give us the bare minimum of being able to have good food to eat and being able to do lifting.”

After the complaints of the players across teams in the tournament, the weight room was improved and officials in the NCAA have vowed to do better. Regardless of the outcome, Reese and her team are looking ahead to their matchup with Mount St. Mary’s on Monday.

“By now, I’m kind of used to it because we’ve always been disrespected, so we just came to play,” Reese said. “We came here to win a national championship so that’s what we’re gonna do, but it’s rolling with the punches and control what you can control.”