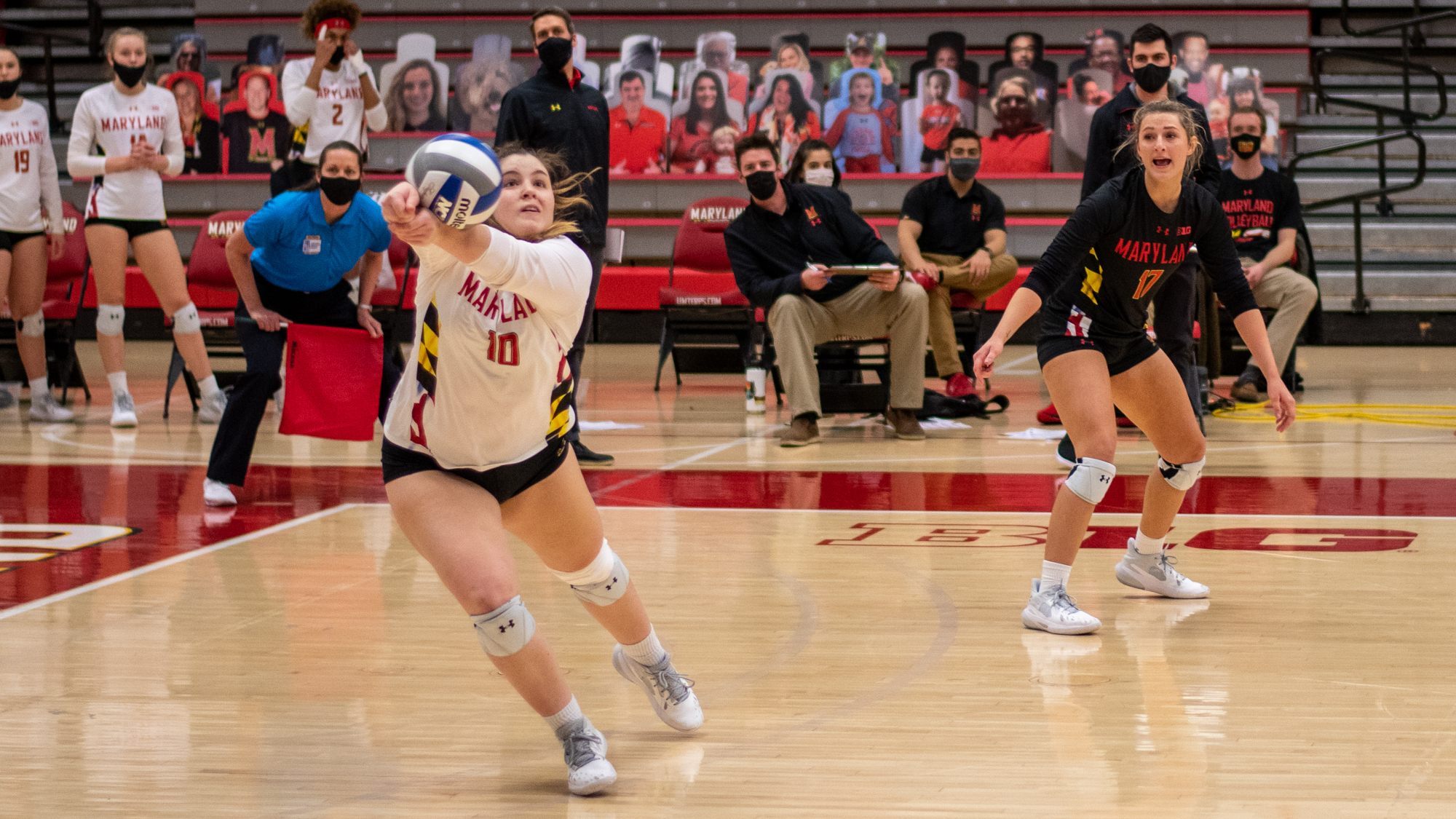 Illinois outside hitter Raina Terry waited patiently on the wing, as libero Alyssa Eske stymied a Maryland attack in the front row. Eske passed to setter Diana Brown, who lobbed the ball in Terry’s direction.

Terry leapt into the air and detonated, sending a missile back across the net that careened off of the chest of Maryland libero Sam Burgio.

“What a battle tonight,” coach Adam Hughes said, “you know, obviously we’d like to be on the other side of the stick, but a lot of competitive volleyball back and forth.”

The opening set was a game of runs by both squads, a mirror image of Friday’s first frame. Illinois got the ball rolling first, as outside hitter Raina Terry spurred an initial 3-0 run with a powerful putaway that split Maryland’s defense on the first point of the match.

The Terps soon responded with a run of their own, finding their footing behind outside hitter Erika Pritchard to roll off five unanswered points. The back-and-forth affair would continue late into the set, as both offenses kept their foot on the gas to bring the frame to a deadlock at 24.

After an Alyssa Eske service error gifted Maryland a set point, middle blocker Laila Ricks challenged Illinois outside hitter Bruna Vrankovic at the net with the chance to clinch the opening set. Ricks rejected Vrankovic’s spike, seemingly winning the point and the opening frame with a massive denial of one of Illinois’ most dangerous attackers.

However, Ricks’ hand grazed the net on her descent.

Ricks’ error was caught by the referee, who signaled for the point reversal and wiped away Maryland’s first set victory. And with the set back to a draw, back-to-back Illinois points gave the Illini the first set win, a stunning 27-25 loss for the Terps.

“It was a big time stuff, we have a ton of energy and the next thing you know the overturn kind of, I think stalled the momentum.” coach Adam Hughes said. “It’s a game of inches, and, you know, that one didn’t go our way.”

Trailing 1-0 after a heartbreaking first set defeat, Maryland quickly put its loss in the past.

After dropping the first four points of the second set, the Terps’ offense came to life, fostering a 10-0 run thanks to a plethora of Illinois attack errors and timely blocks from middle blockers Rainelle Jones and Cara Lewis.

Jones, who led the Terps’ defense with three blocks in addition to her eight kills on the evening, was relentless as the Terps’ lead continued to balloon, stifling the Illini’s once potent offense at the net.

A stark contrast from the push and pull first set between the two squads, Maryland dominated the second set, racing out to a double digit advantage and never looking back en route to a 25-12 second set victory.

“We weren’t afraid,” libero Sam Burgio said of Maryland’s second set turnaround, “we were really going after our serves and I think that that’s what really helped to win the serve and pass game, and that allowed our hitters to spread out the offense.”

With the match knotted at one set apiece, both teams jostled for momentum to begin a pivotal third frame. Illinois’ aggressive offense returned to earlier form, behind seven third set kills for Terry and six for Vrankovic.

And despite a six kill outburst from Maryland outside hitter Sam Csire, Illinois’ offensive output proved to be too much for the Terps to handle late in the third.

The fourth set of action, much like the weekend as a whole, was yet another battle between two teams in desperate need of a Big Ten win. Both squads exchanged leads, but this time it was the Terps who prevailed late in the set.

With the set tied and the Illini just points away from sending the Terps packing, Pritchard imposed her will on the offensive end for her team. Pritchard, who finished with a team-high 18 kills in the match, converted on three straight putaways to give Maryland some cushion. And after a Rainelle Jones kill gave the Terps a set point, a big-time block tooled by Lewis and Csire sent the match to a deciding fifth set.

However, the fifth and final frame belonged to the Illini.

Two Maryland errors gave Illinois a 3-0 advantage to start the set, and it never looked back. The Terps came within 2, but simply couldn’t catch up to an Illini offense that came alive.

So, Maryland dragged itself back into a game that once looked lost. But in a decisive fifth set, Illinois was the more assertive side. After a promising 3 game win streak, the Terps have now dropped two in a row, and are left searching for answers.