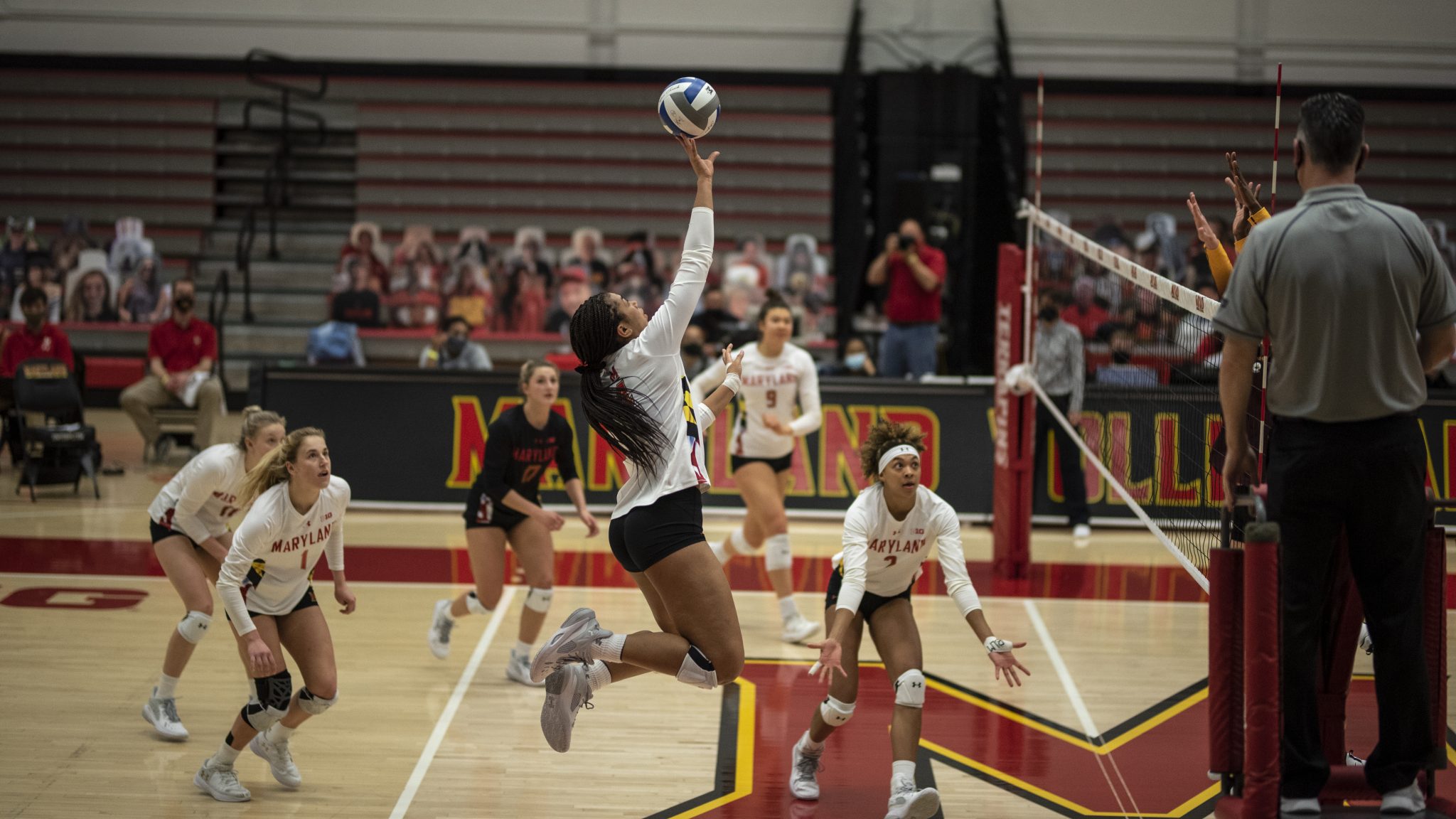 After Illinois setter Kylie Bruder’s rifling serve was bumped weakly back over the net by Hailey Rubino, outside hitter Bruna Vrankovic sprang into action.

Noticing Maryland volleyball’s imbalance in the back row, Vrankovic leapt into the air and pulverized the ball, sending a kill through the fingertips of two Maryland defenders and out of the reach of libero Sam Burgio.

“I thought they kind of just did a good job of keeping rallies going and forcing us into some tough swings,” coach Adam Hughes said. “I think at times we were trying to be a little bit too crafty or trying to be a little too sharp, too aggressive in certain situations rather than just kind of trusting the defense.”

The Terps came out of the gates hot to open the contest, snatching four of the first five points thanks in part to two quick putaways from outside hitter Erika Pritchard. Maryland’s fast start would soon stagnate though, as two Jada Gardner misfires coupled with a Pritchard service error evaporated the Terps’ early advantage.

In what was a back-and-forth first frame characterized by errors from both squads, it was Maryland who came up with the first run of the set. After an Emily Hollowell spike attempt was rejected at the net by Sam Csire and Cara Lewis, the Terps rattled off the next three points to take a 14-11 lead, putting the pressure back on the Illini.

And while Illinois responded, tying the set up at 20 later in the frame to make things interesting, Maryland’s offense once again came to life to clinch the first set.

After a Laila Ricks kill attempt was swatted by two Illinois defenders, Csire reclaimed Maryland’s momentum on the next point with a rocketing kill that pierced the Illini defense. Csire’s jolt of energy proved to be exactly what the Terps needed, as Pritchard followed it up with two kills of her own to win the first set, 25-22.

With the first set in the books, Maryland looked to be rolling past an Illinois team that had lost its last ten contests. However, the Illini found their footing in the second frame.

Spurred by four kills in quick succession from outside hitter Raina Terry, the Illini erupted to an early 10-3 lead. Maryland’s defense, which had ranked third in the country in blocks per set coming into the contest, was dormant as Terry seemingly found each and every hole in the Terps’ defense to open the frame.

After back-to-back Vrankovic spikes dug Maryland into an even deeper hole, coach Adam Hughes burned a timeout midway through the set in the hopes of slowing the roll of an Illinois team firmly in its rhythm.

And while Pritchard made the Illini pay coming out of the break with a powerful service ace, Hughes’ timeout ultimately proved futile. Vrankovic and Terry continued to punish the Terps offensively– to the tune of 12 combined kills in the set for the pair — as Illinois ran away with the second set, 25-17, to tie the match up at one set apiece.

“I definitely think their serving pressure went up, and our serving errors went up,” Burgio said of the transition from the first to the second set, “we got a little tentative and then we should have focused more on getting back into it, not letting them go on long runs.”

While the second set of action was a lopsided affair, the pivotal third frame between the Terps and Illini was a more accurate reflection of the contest as a whole — a back-and-forth slugfest.

Illinois struck first, garnering a 17-14 advantage after yet another Vrankovic kill. Maryland then parried with a mini-run of its own, rattling off three straight points to bring the set to a deadlock.

Maryland’s spurt of energy forced Illinois coach Chris Tamas to take a timeout, desperate to talk things over with his squad in hopes of stifling Maryland’s growing momentum.

And Tamas’ timeout did just that.

The Terps’ offense floundered out of the break, dropping the next seven points thanks to five straight errors to give the Illini a sizable buffer to work with. And as Burgio’s foot snagged the line on a service attempt just points later, Illinois had captured a once competitive third set in comfortable fashion, 25-18.

Now down a set on the road to a hungry Illinois team, Maryland couldn’t recapture the momentum that it had garnered throughout its three-game win streak.

The Terps fell in a 3-0 hole early, still showing signs of its third-set stupor. The Illini would continue to pounce, led by the explosive duo of Hollowell and Vrankovic. The two outside hitters would dominate, combining to put seven spikes past Maryland’s hapless defense. Any brief shutter of Terps’ life would be met with a pour of Illini points, with Illinois eventually opening up a 23-13 lead.

Hughes’ squad whittled away at the Illini lead, though. And soon, that fortress of points that separated the two sides shrank. Illinois gave away nine straight points to the Terps via service and attack errors. With Maryland down 24-22, the comeback was officially on.

Then, Terry rose above the scrum of Illini players at the net. She raised her hand, smacking the ball beyond the Terps’ back line to give Illinois a tighter-than-expected victory — its first win since Jan. 23.

“I think we definitely need to focus on our errors and not being afraid of the block and the defense on the other side of the net.” middle blocker Rainelle Jones said. “I think also communicating with our players on… where we can hit and where we can possibly score is definitely going to be a big one for us.”

Vrankovic was much of the reason why the Illini snapped their winless run. Now, she earns another distinction: yet another Big Ten star who showed up when it mattered the most against Maryland.

“We’ll get back to work,” said Hughes, “we got a late night watching some film [to] see if we can make some tweaks and see if we can get a better outcome tomorrow night.”