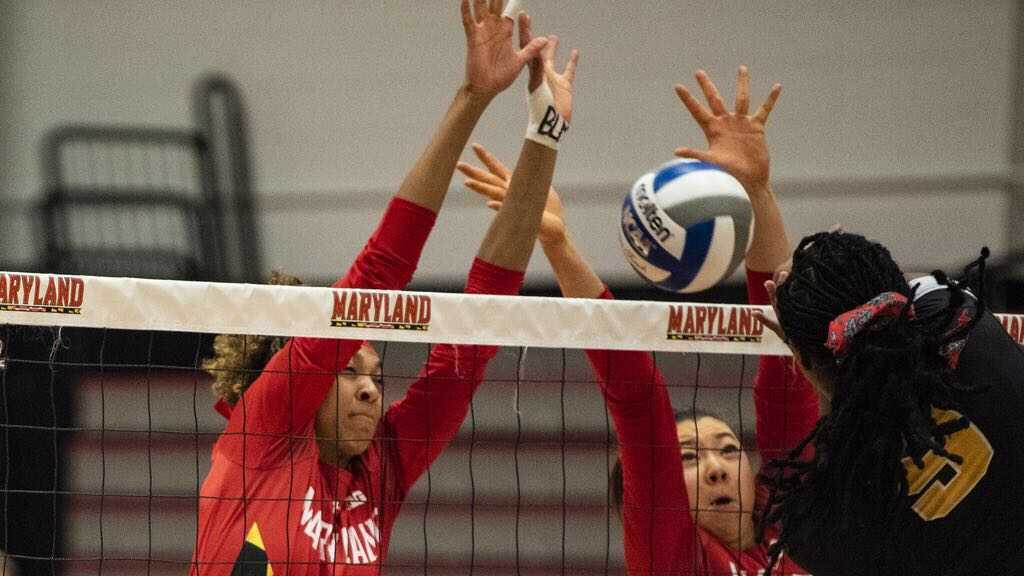 With Maryland volleyball up by two sets deep in the third frame, Iowa outside hitter Audrey Black leapt into the air, hoping to turn the tides of the match with a powerful putaway try.

As she wound up and swung, she was met at the summit by Jada Gardner and Cara Lewis, who formed a brick wall to bat Black’s spike back across the net.

“I thought that was our best performance of the year,” coach Adam Hughes said. “I thought it was a complete game from the entire team, thought we made some plays and hung in when things were a little bit tight.”

Outside hitter Erika Pritchard got the ball rolling for the Terps early, racking up four quick kills to help foster an early 11-8 lead in the first set.

And while the Hawkeyes responded, tying the frame with three straight putaways, Maryland soon found its footing.

After a Sam Burgio service ace followed by a Hawkeye ball-handling error gave the Terps a momentum boost, middle blocker Rainelle Jones punished Iowa with her first putaway of the evening. Her kill pushed Maryland’s lead back to three, forcing Iowa coach Vicki Brown to burn a timeout — a timeout that proved futile.

Maryland kept its foot on the gas, as outside hitter Sam Csire connected on two kills in quick succession. Fellow freshman Laila Ricks also dazzled, succeeding on all four of her kill attempts to give the Terps a late lead.

Hoping to finish off an Iowa offense devoid of momentum, Maryland’s consistency shone through in the first frame. The Terps committed zero attack errors in the set, pushing them to a 25-21 first set victory.

The struggling Hawkeyes showed promise at the start of the second set, grabbing the first three points of the frame. However, Maryland’s defense quickly became too much for Iowa to handle, as middle blockers Jones and Lewis imposed their will at the net.

With the Terps up 15-13 midway through the second set, Hawkeye outside hitter Audrey Black attempted to halve Maryland’s lead with a high-flying kill attempt, only for it to be denied at the net by the duo of Jones and Jada Gardner.

The block sparked a 5-0 Maryland run, a lead that the Terps would not look back from. Accumulating five rejections in the set, Maryland strolled to a 25-16 set victory, pushing its lead to 2-0 and sending the Hawkeyes jogging to their locker room to talk things over.

“It’s a hard game to play perfectly because, I mean to score points, the other team has to mess up,” libero Sam Burgio said. “I think what our best skill was today was… [controlling] our own emotions instead of getting caught up in whatever the other side was doing.”

After coasting to a comfortable victory in the second set, the third frame was reminiscent of the back-and-forth Big Ten battles that Maryland had been accustomed to playing throughout the season.

Both teams exchanged leads, but again it was Maryland who prevailed in the end.

Pritchard continued to dominate, adding three kills in the third set for a total of 13. And as her final swing was tipped firmly out of the reach of the Iowa defense, the Terps had completed their season sweep of the Hawkeyes, and pushed their win streak to three.

“I think it shows the potential of what this group still has,” Hughes said. “Obviously, as a coach, I’m pretty proud of that performance.”