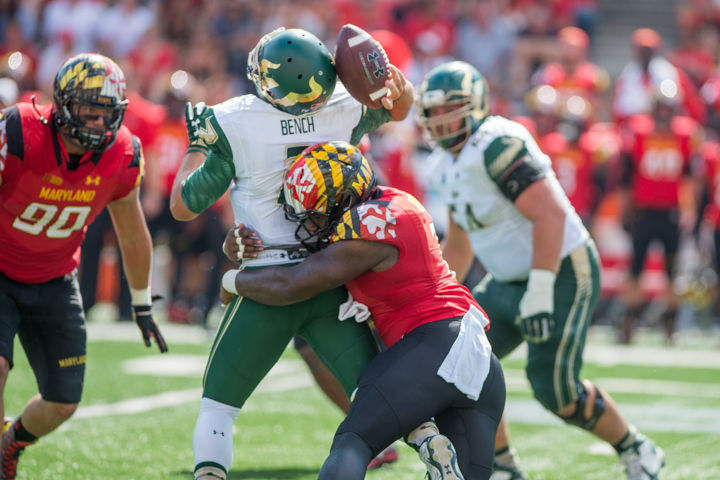 Defensive end Yannick Ngakoue hits the quarterback as he throws, causing an incomplete pass during Maryland's 35-17 win over South Florida at Byrd Stadium on Sept. 19, 2015.

Former Terrapin Yannick Ngakoue is headed to Las Vegas, after reaching an agreement with the Las Vegas Raiders on Monday.

The sixth-year pro, who was a third-round pick in 2016, agreed to a two-year, $26 million contract to join the Raiders. The deal will become official when NFL Free agency begins on Wednesday.

After spending the first four years of his career with the Jacksonville Jaguars, Ngakoue spent the start of the 2020 season with the Minnesota Vikings, before being traded to the Baltimore Ravens in October. He has recorded at least eight sacks in each of his first five seasons, with a career-high 12 in 2017. He will have the chance to make an immediate impact for a Raiders’ team that ranked 29th in total sacks last season.

Sacks may not be the only place Ngakoue can make an impact. He has also forced 18 career fumbles and has gained notoriety for his ability to punch out the football quickly off the snap. The Raiders’ ranked 30th in forced turnovers a season ago, so Ngakoue has the chance to be a key piece of their defense moving forward.

Turning 26 later this month, Ngakoue is in the prime of his career and could end up as a difference maker in Las Vegas. While the current agreement is for just two years, his performance could set him up for another payday down the road, if he continues to perform as well as he has.