Maryland gymnastics notches a 195.05 at Senior Night, despite stumbles on beam, floor 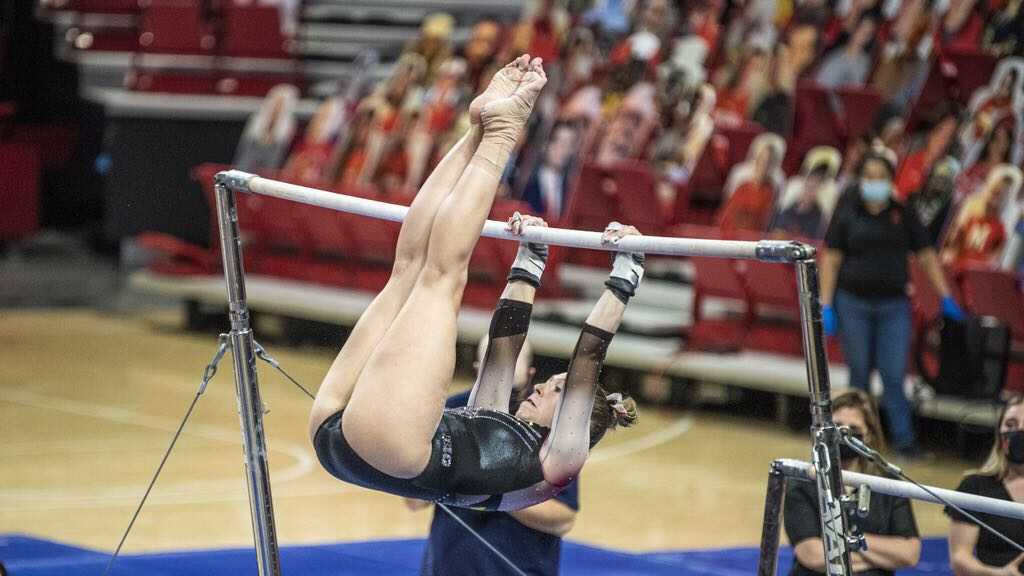 Maryland gymnastics sophomore Reese McClure rocketed down the runway toward the vault table, kicking things off for 12-year coach Brett Nelligan’s squad. With an explosive launch off of the table that sent her spiraling into the air, a stuck landing on the routine secured her a season-best score of 9.90 on the apparatus and a hot start for the Terps.

And McClure’s stellar leadoff performance was the best one for the Terps as they went on to register a season-high 49.25 on the vault.

“The vault team was feeling strong and confident, so I was ready to put up a big number,” McClure said. “I’ve been looking for that stick all season, so it was nice to have it come out on senior night and start out the team really strong.”

McClure’s showing on the vault was one of only a few memorable moments for Maryland as it hosted No. 4 Michigan at the Xfinity Center for its senior night and last regular season meet. With its hopes for a winning season on the line, the Terps’ showing on vault was just what Nelligan’s group needed to begin the evening and lift it to another 196 on the year.

But the Terps fell short of the mark, and notched only a 195.05 on Friday evening.

“Not everything went the way we wanted to tonight, and we knew we left some tenths [of a point] on the table,” Nelligan said. “But everyone fought, everyone competed with their heart, everyone gave everything they had.”

Freshman Samantha Gilbert immediately followed up McClure with a season-high 9.80, and senior Audrey Barber and junior Alexsis Rubio anchored the lineup with a strong 9.875 and 9.85, respectively.

[Aleka Tsiknias’ injury is another major blow to Maryland gymnastics]

Facing just a small deficit heading into its second rotation, Maryland looked to hold onto that momentum on the uneven bars. But a pair of lackluster scores from its leadoff Sophia LeBlanc and anchor Rubio dragged down the Terps’ score.

Though Barber notched a 9.90 and junior Sanya Glauber found greater success on the bars than during Maryland’s meet against Rutgers on March 3, those scores were not enough to carry the Terps to their fifth 49-point performance of the season in the event.

Missing two of its stars to season-ending injuries, sophomores Emma Silberman and Aleka Tsiknias, Maryland knew this meet would be one of its biggest challenges yet. And with Michigan’s mind-boggling 49.80 on the vault during the second rotation, victory was looking out of reach for the Terps at the halfway point.

Nelligan’s squad looked to pick up where it left off on the vault during the third rotation, but more less-than-stellar showings led to a season-low 48.25 on the balance beam. Despite a solid, though not spectacular, leadoff score of 9.75 from Collea Burgess, several wobbles and falls from much of the lineup cost Maryland a chance to close the gap — and a higher score.

“I was definitely a bit shaken up after beam,” McClure said. “But, it is senior night, and I was ready to put a smile on my face and go out and come back with a really strong floor routine for my team.”

Only Barber scored greater than a 9.80 in the event, and Maryland would need to put on a spectacle during the floor exercise to help boost its national qualifying score.

LeBlanc stepped in for the injured Tsiknias in the leadoff spot for the Terps’ floor exercise, and with a loss of balance that sent her far outside of the boundaries of the mat, Maryland was off to another slow start.

Some missteps and a loss of balance from Rubio and another step out of bounds from senior Sabriyya Rouse resulted in Maryland’s second season-low in an event on Friday evening, as it earned only a 48.675 on the floor.

Despite the mistakes for the Terps, senior night proved to be a fun one with parents and family getting the chance to cheer from the Xfinity Center’s stands for the first and only time this season.

This held especially true for Barber, who smashed her career-best in the all-around, scoring a 39.55 in her final home meet.

“Honestly, it was pretty amazing to have my parents up in the stands today,” Barber said. “I was feeling a little extra pressure just because it was senior night, but before my floor routine I was definitely feeling it… I wanted to give it all I had.”

Though Maryland ends the season at 7-8, its first losing season since 2016, its uncommon mistakes on beam and floor show areas where the Terps can improve heading into the Big Ten Championships on March 20 and the national tournament after.

“Beam, obviously, we can’t count the fall, so we eliminate that, we’ll be in really good shape,” Nelligan said. “And then floor was uncharacteristic for us… but we’ll get those tightened up this week heading to the Big Tens.”