Aleka Tsiknias’ injury is another major blow to Maryland gymnastics 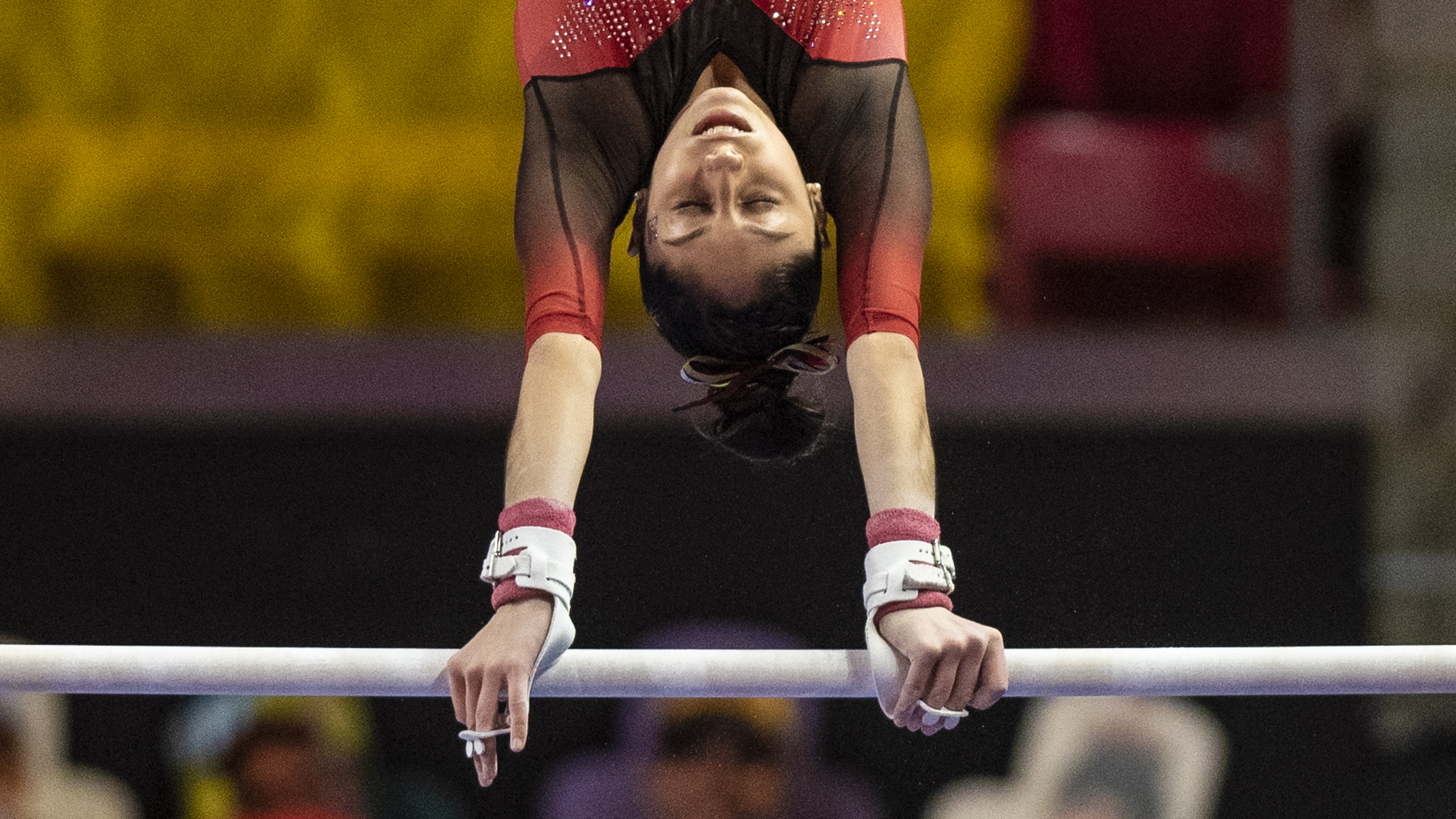 Aleka Tsiknias holds herself upside down during her bars routine for Maryland gymnastics on March 3, 2021. (Eric Harkleroad/The Diamondback)

It had been 360 days since Maryland gymnastics sophomore Aleka Tsiknias had last competed on the vault. With all-arounder Emma Silberman out with a torn ACL, she knew she had to step up for the Terps during their home meet against Rutgers on March 3.

And Tsiknias did just that. After a rapid sprint toward the vault table and a mixture of handsprings, flips and twists, she had notched a 9.85 — the highest score on the team.

“Before me, we had five really, really good hit vaults,” Tsiknias said. “So I was just ready to keep that going and hit my vault and finish off a good rotation.”

But in the days since, coach Brett Nelligan and his group of gymnasts have faced another injury blow; Tsiknias suffered a season-ending tear of her Achilles tendon during practice on Wednesday afternoon.

As the 7-7 Terps prepare to host No. 4 Michigan for their last meet of the season at Xfinity Center, the unexpected loss of another starter may lead to its second losing season in twelve years with Nelligan at the helm.

Tsiknias’ injury comes during a long break since the Terps’ last meet that they expected would help some of their teammates adjust to their new roles following the loss of Silberman.

“To have them come in the lineups is nothing new because we’ve been preparing for it all of preseason,” senior Audrey Barber said. “But the extra time definitely does help, I would say, on the confidence level when we are in competition.”

Now, with the loss of Tsiknias, Maryland’s beam, vault and already-unpredictable bars lineups will have to be altered again to make up for it. Regardless, Nelligan has confidence in his squad stepping up despite the situation.

The Terps are ranked No. 28 in the nation, and they look to hold onto that spot with another good score on Friday. Although the top-36 teams in the country make it to the national tournament, dropping just one spot lower would mean missing out on the first-round bye and having to participate in an additional dual meet.

Just as it has done all season, Maryland will need to overcome its newest obstacle in its path to at least maintaining its current position and increasing its national qualifying score.

Between a long stretch of road meets, teammates undergoing COVID-19 contact tracing and now a second season-ending injury for a team member, the Terps have managed to find a good amount of success this season.

And outside of doing well in its last regular season meet, Nelligan wants his team to focus on staying loose and having a good time. Friday evening’s meet against Michigan will be the last one at Xfinity Center for Maryland’s seniors, and he wants it to be one they will remember for the rest of their lives.

“I think they’re excited. They’ve seen senior nights in the past, and it’s always fun and exciting and emotional and high energy,” Nelligan said. “I tell them every year: ‘Don’t hide that emotion, compete with it, let it out.’”