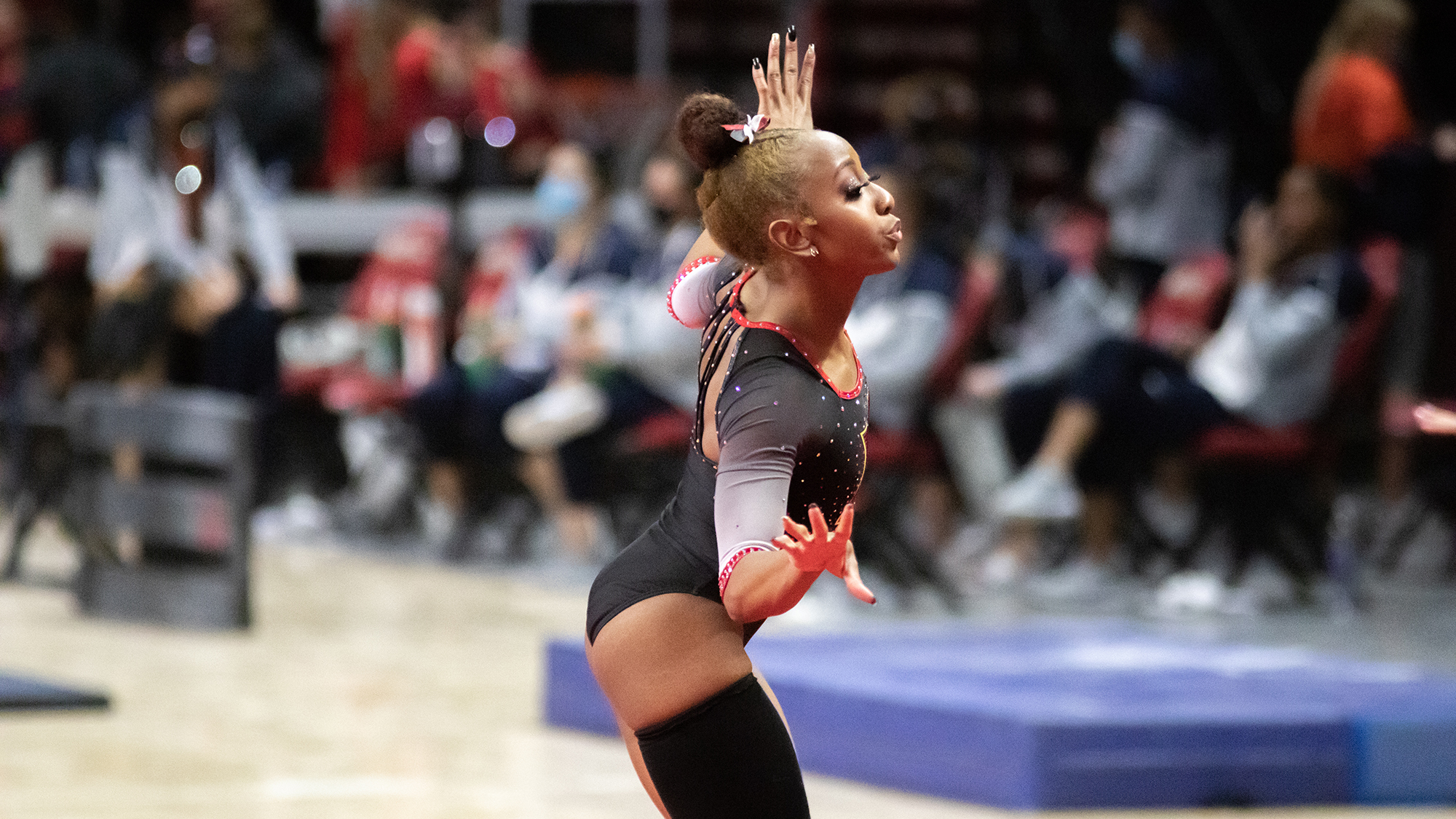 Sabriyya Rouse expertly performed her floor exercise routine for Maryland gymnastics. With her series of handsprings and flips, the senior had set herself up to contribute solidly to the Terps’ score on the apparatus and make a push for the 49-point mark, which coach Brett Nelligan’s squad had fallen short of just once so far this season.

But Rouse rushed the landing on her final pass — and with a loss of balance, she fell to the floor. Her routine had earned a score of only 9.20, putting the pressure on seniors Collea Burgess and Audrey Barber to nail the last two routines for Maryland.

Burgess and Barber, who needed to combine for 19.725 points to help the Terps reach a score of 49 on the apparatus, understood the team’s result rested in their hands.

“They were both following a fall. Those are absolute must-hit situations,” Nelligan said.

As Burgess steeled herself for her routine, shouts of support came from her teammates on the Maryland sideline. Even as she waited for the Rutgers beam routine on the other side of the gym to end, Burgess looked excited.

And once the music for her floor exercise began to play, Burgess harnessed her teammates’ energy and let it all out during her routine. Dancing in rhythm to her reggae-inspired tracks, Burgess’ performance was off to a strong start.

A stuck landing right on beat to finish her first pass filled her with additional life and vigor, which Burgess maintained throughout the rest of the routine. She earned her second 9.90 of the season, and the Terps were on track to restart their streak of earning a 49 or greater on the apparatus, which was broken just days earlier at the Big Five meet.

Still, the Terps needed a stellar performance from Barber to reach the score. And she provided just that.

Barber recognized that following Burgess’ strong showing just moments before was one of the keys in scoring a 9.90 herself.

“Following a huge routine like Collea’s just pumps me up even more,” Barber said. “It gets me excited for my routine and … she basically just sets me up to have a great routine just like her.”

[Maryland gymnastics will rely on its bench as several key starters remain out]
That boost of confidence increased Barber’s energy level, and she was ready for her turn to compete on the apparatus. And once she stepped onto the floor, her verve only grew with every step, leap, handspring and somersault.

Barber’s outing secured her a score of 39.425 on the all-around — her highest score all season. It was enough to push the Terps over the 196-point mark for the second time this year.

Heading into its final regular season meet and the Big Ten Championships, Maryland will need more above-and-beyond performances like Burgess’ and Barber’s to remain competitive. But Nelligan knows his leaders are more than capable of driving the team toward its goals and further success.