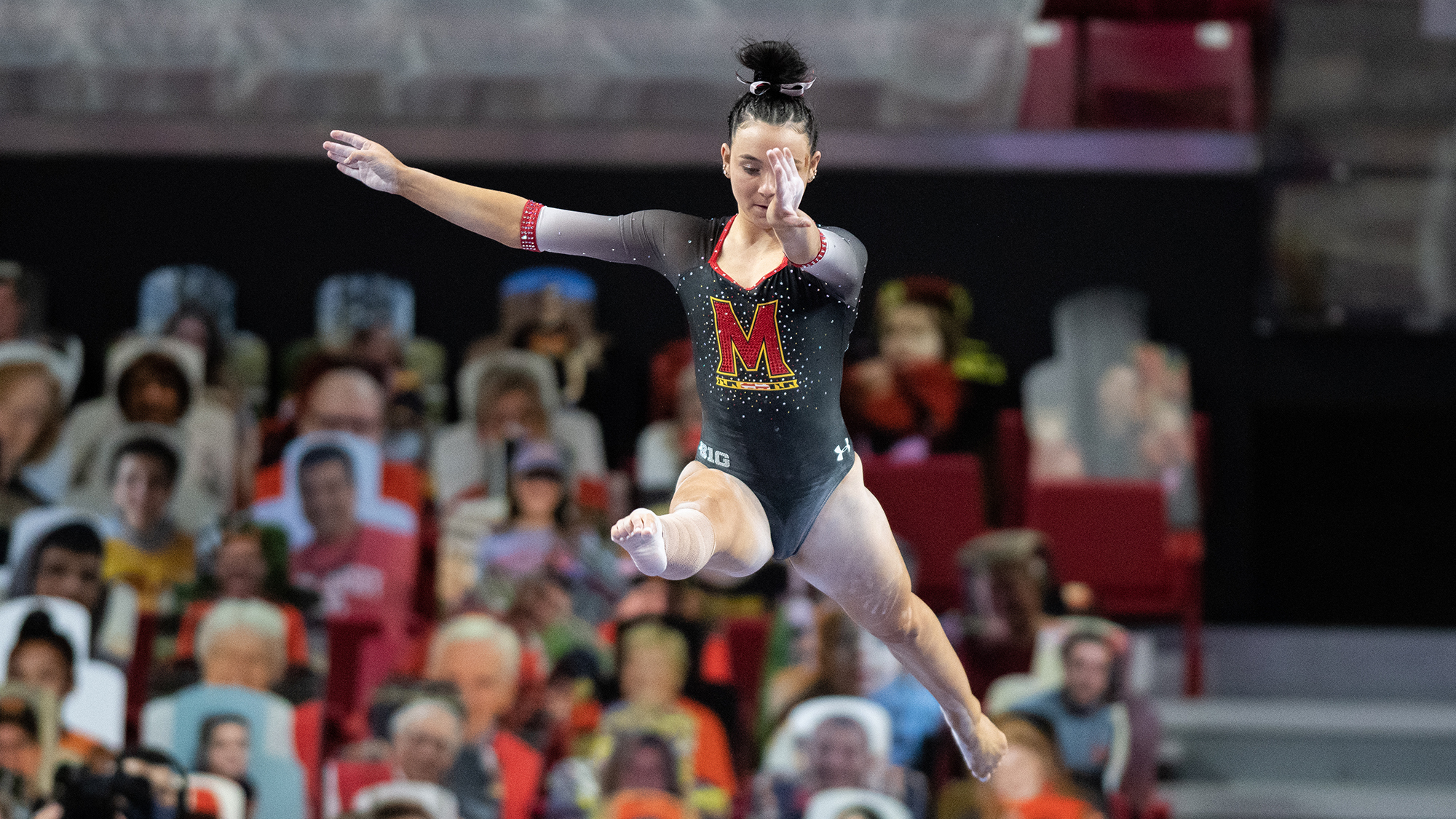 Sophomore Reese McClure dashed towards the vault table, channeling the verve of the Big Five meet happening around her into Maryland gymnastics’ opening routine. And as she sprung herself off of the table and high into the air, it seemed like she would post a solid score.

But a hop backwards on the landing left her with only a 9.725, her second lowest score of the season. When sophomore Emma Silberman and freshman Samantha Gilbert followed up with a 9.75 and 9.675, respectively, it looked like the Terps would be off to a slow start.

Coach Brett Nelligan’s squad recorded a 48.925 score on vault, its worst showing on the apparatus since Jan. 30.

Maryland’s lackluster start was one of few disappointments in an otherwise impressive showing as the Terps posted a second-best 195.725 despite a plethora of lineup changes and an injury halfway through the meet.

“I think they did a great job of taking what was available. We were clean with most of our landings,” Nelligan said. “You do the best you can and take what there is.”

And as Maryland moved onto the second rotation, it seemed its languid start would continue. Nelligan’s squad was missing three key pieces in freshmen Olivia Weir, Tayler Osterhout and Elizabeth DeBarberie who, alongside fellow freshman Alexa Rothenbuescher, were held out due to COVID-19 contact tracing protocols, according to a team spokesperson.

Instead, a series of strong performances ensued — including career highs from sophomore Sophia Leblanc (9.80) and junior Sanya Glauber, who had not competed in over a month. Glauber recorded a 9.95, the highest mark of any Terps gymnast in any event this year.

“We needed [Sanya] to step up and hit a bar routine tonight and she goes career high,” Nelligan said. “Sophia stepped up and hit two career highs for us tonight because we needed to find ways to pull tenths [of a point] from other areas.”

As Silberman prepared for her own dismount, it looked like the streak of high scoring routines would continue. But as she landed, her arms immediately jumped to her knee and she fell to the ground. The injury would leave the all-arounder sidelined for the rest of the meet.

But senior Audrey Barber posted a 9.925, tying her best score this season, and junior Alexsis Rubio’s 9.675 in her first appearance on the apparatus this season pushed the Terps to a season-best 49.175 score in the event.

Nelligan’s squad had gained the momentum it was looking for, and as it moved into its third rotation on the balance beam, the Terps wanted to keep the energy up. Senior Collea Burgess’ leadoff performance earned her a solid 9.75, setting the stage for another decent, if unspectacular, set of Maryland routines.

Some stronger routines from McClure and LeBlanc led the Terps to another 48.925, and Rubio, who was added to the lineup after Silberman’s injury, added another 9.75 that kept Sabriyya Rouse’s fall from counting.

“I think everything that I’ve been doing leading up to this point, all of the numbers in the gym, all of the exhibition spots have definitely prepared me for this,” Rubio said. “And my job is just to do anything that I can for my team.”

And through its first three rotations, Nelligan’s squad was still on pace for its second 196 in a row.

However, Maryland was unable to recreate the magic it conjured up on floor last weekend.

After sophomore Aleka Tsiknias posted an 8.90 on the floor, her worst showing of the season, the Terps lost the momentum they had built. Only Barber exceeded a 9.8 and Maryland scored below a 49 on floor for the first time this season.

Still, Nelligan’s team was able to overcome a range of adversities during the meet and posted its second-best score of the season. And with some missing teammates and one of the Terps’ stars in Silberman potentially having to sit on the sidelines going forward, it may be something Maryland needs to do again Wednesday evening against Rutgers.

“[Their ability to overcome adversity] is unlike anything I’ve ever seen,” Nelligan said. “We had some teammates that weren’t available for us tonight, and that was hard to begin with … So many kids stepped up.”