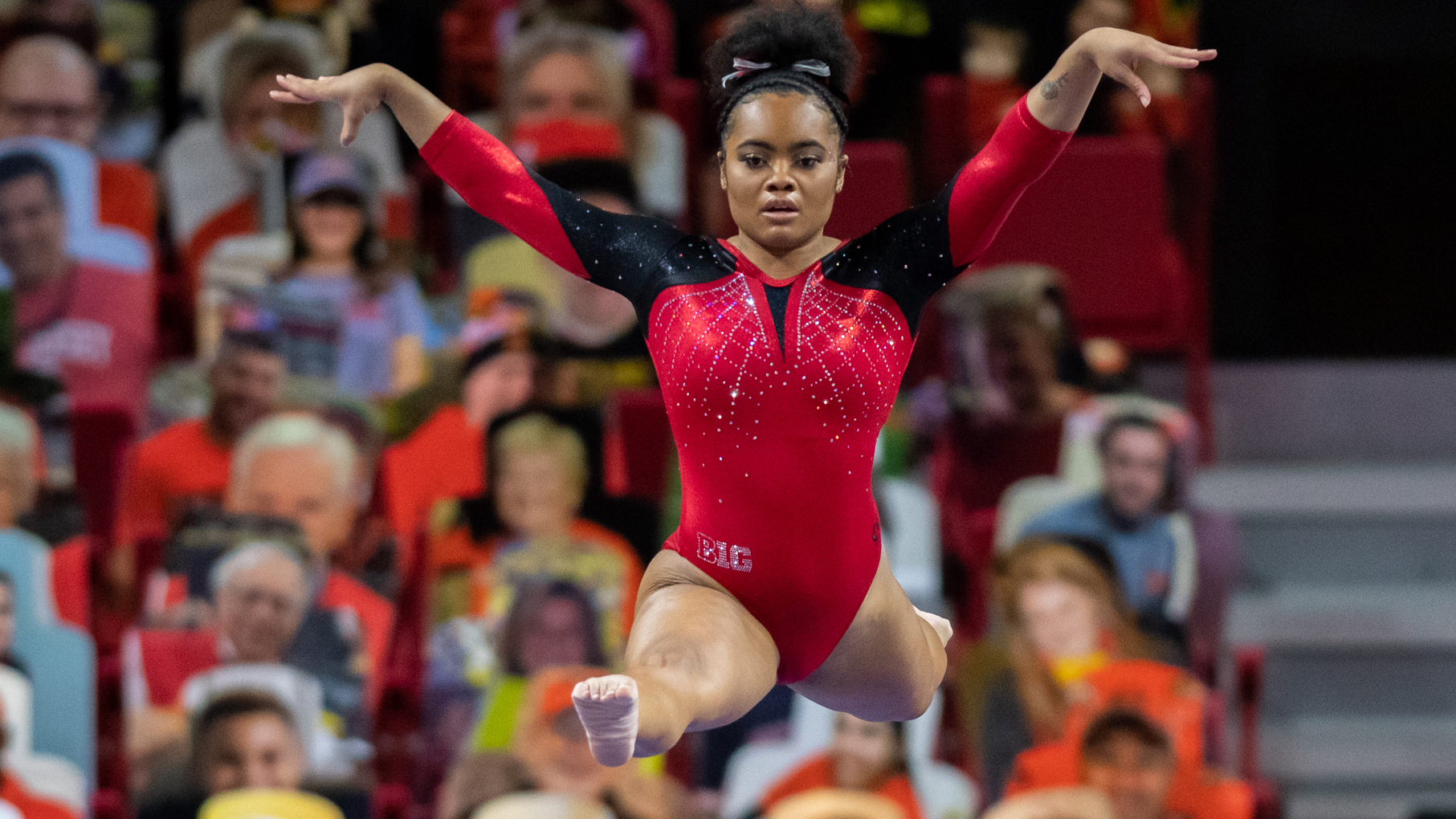 With every skill sophomore Emma Silberman performed on the balance beam — a steady series of flips, twists and spins — Maryland gymnastics’ sideline got louder, its energy continuing to build.

Silberman’s performance was the first of a flurry of electrifying routines for the Terps at Sunday’s Penn State Tri that helped the team post a season-best 196.275.

Now, coach Brett Nelligan’s group hopes to bring the same energy back to College Park for the squad’s first of a series of three home meets to close out the season.

“I think last meet was definitely one of our highest, and I think we showed that we have a lot of potential,” freshman Samantha Gilbert said. “We want to take that to the next meet and show everyone what we’re capable of and all that energy.”

And even without fans in the arena, Friday evening’s meet is expected to bring abundant excitement as the Terps host the Big Five meet at Xfinity Center for the first time. And Maryland is up for a challenge, as three of its counterparts rank in the top 25.

“The Big Ten conference is so strong that you have five really good teams on the floor at the same time,” Nelligan said. “You’re going to see tons of really high-level, quality gymnastics.”

But with so many teams comes additional opportunities for distraction. Despite the cheering and yells coming from the other teams, the steady blaring of music for a gymnast’s floor routine and the constant flashes of movement from every corner of the gym, the Terps are looking to stay dialed in.

For Nelligan’s team, this means capturing the energy of the environment around them and bringing it into its “bubble.” The Terps have placed an emphasis on this throughout the season, and with the additional energy available to them on Sunday, they expect to put out a strong show.

“With a meet with five teams, it’s easy to have wandering eyes, but we always think about just one thing at a time, one routine at a time,” senior Collea Burgess said. “And once the energy starts flowing, it really feels like it’s just us in there.”

And should its energy levels get low, Nelligan is confident his team will find the spark it needs to gain positive momentum.

While he commends the knack of some of his stars such as Sabriyya Rouse, Reese McClure and Audrey Barber for sensing turning points and delivering strong routines, Nelligan knows a fire can be lit in his team by any member of the roster.

And Burgess does not overlook the impact of some of her teammates who have not had as much of a chance to perform on competition day in igniting that flame for the Terps. Sometimes more important than watching a teammate nail a superb routine are the supportive words and cheers from those on the sidelines.

“[Leksana] and Sanya especially are super loud, super motivational. If there’s a bobble or a mess-up and the energy starts to shift, they’re always picking everyone back up … with the encouraging words that they tell other people and just the way that they’re cheering,” Burgess said.

While finding and maintaining positive energy is going to be key to Maryland’s success Friday evening, that is not the only thing that will help its performance.

Really, the Terps will just look to keep doing what they have done all season: put out their best effort yet and enjoy their time competing with each other in the gym. The team has flashed its potential throughout the season, and it looks to show it off to the rest of the conference again, this time at its own house.

“I think we just need to continue keeping that energy and trust our training and have that confidence,” Gilbert said. “And just have fun because we do our best when we’re having fun.”