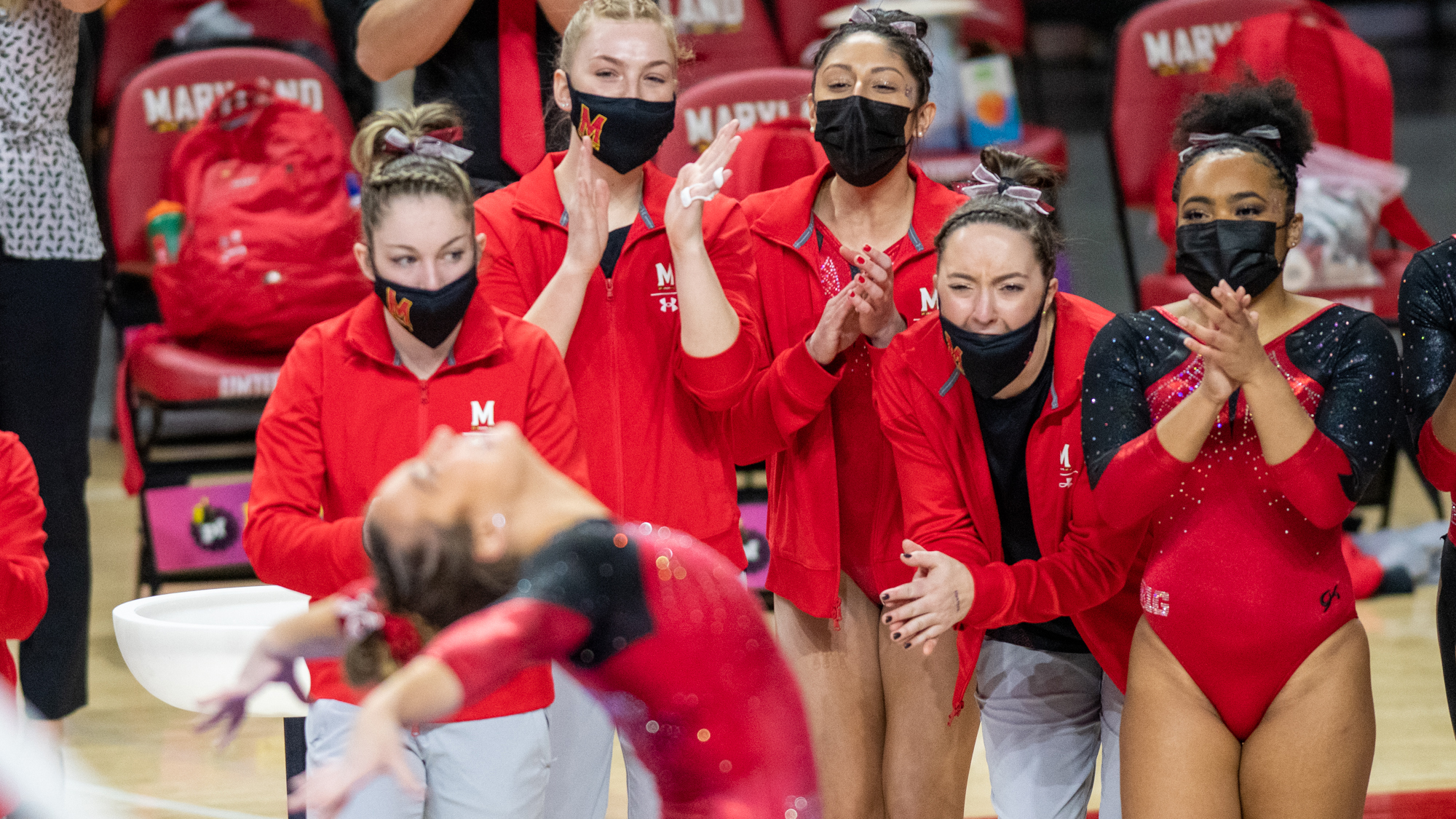 Maryland women’s gymnastics had enjoyed a strong afternoon at Sunday’s Penn State Tri-Meet, and it was looking to avoid cooling off during the final rotation on its worst event this season: the uneven bars.

A pair of skillful leadoff performances on the apparatus from sophomore Aleka Tsiknias and freshman Olivia Weir put the Terps on the right track to reach their first 196 of the year.

Freshman Tayler Osterhout approached the bars for only the second time during her collegiate career, trying to remain calm while knowing that a season-high was on the line.

She’d shaken off the freshman jitters, but the pressure was still looming.

“During competition, we know that we only have one chance to get it, so I really try to make myself calm before I go because I know the one chance really counts,” Osterhout said.

Osterhout’s routine was impressive. With remarkable attention to detail and stellar execution of her handstands, flips and twists, Osterhout knew she’d made an improvement even before the judges flashed her score. She ended up earning a new best of 9.875 — a score good enough to tie for second best in the meet.

That standout performance was no surprise to coach Brett Nelligan. It was only a matter of time when she would be ready to put her talent on display.

“She’s always had that potential, but she just wasn’t ready to put it all together,” Nelligan said. “Right from the start and during the recruiting process, we fully believed that that’s what she’s capable of on bars.”

And Osterhout’s coach remained impressed after her arrival to Maryland. Though she did not get a chance to make an immediate mark at the start of the season, Nelligan recognized the amount of work Osterhout put into mastering her craft.

Osterhout’s first Maryland performance came at the Iowa Tri-Meet on Feb. 13. But the nerves got to her, and her score suffered.

She earned a solid 9.70, but her coach knew she could do better.

“She didn’t get discouraged, she didn’t put her head down, she just kept working and kept working,” Nelligan said.

And Osterhout’s performance was only one of many bright spots for the Terps during Sunday afternoon’s meet against Penn State and Ohio State.

Sophomore Emma Silberman also earned a season high 9.875 on bars, along with a pair of career highs — a 9.85 on beam and a 39.325 in her all-around performance. Senior Audrey Barber also tied her career best 9.90 on the vault during the meet.

But it was Osterhout’s showing that earned the most praise from Nelligan. And it had been a long time coming.

“Tonight is when it all came together,” Nelligan said. “I really think this is where she can be at for the rest of her career, if not higher.”