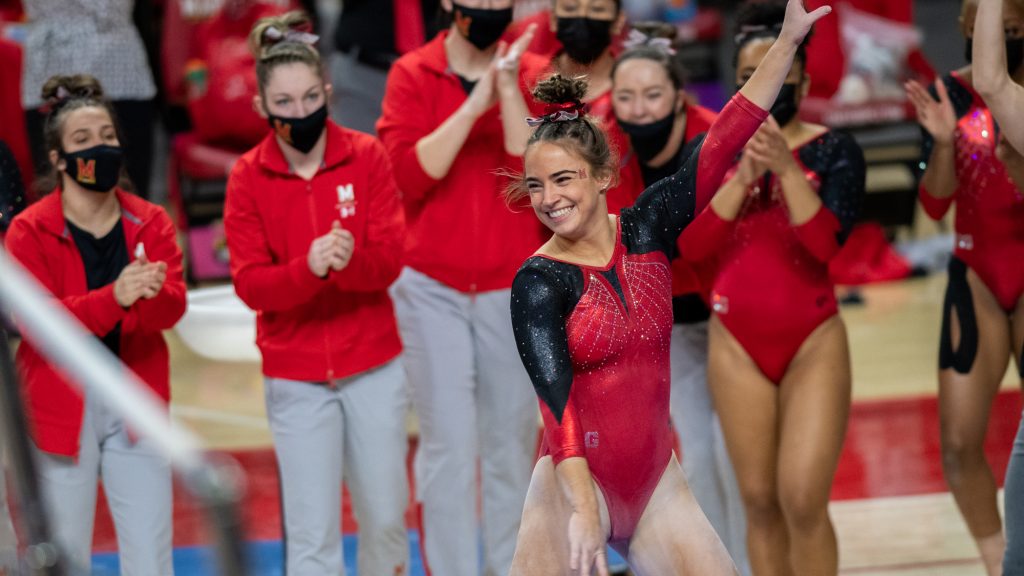 Sophomore Emma Silberman rocketed down the runway to perform her routine on the vault. She thrusted herself off the table to execute a whirlwind of somersaults and stuck a solid landing to earn a 9.85 for Maryland gymnastics.

And the momentum from Silberman’s performance continued throughout the rest of the Terps’ final rotation as they earned two season-highs, a 49.175 on the vault and a 195.35 in the meet.

But a slow start on the uneven bars and balance beam led coach Brett Nelligan’s squad to a last place finish in the Iowa Tri-Meet, pushing it to a sub-.500 record for the first time since March 2019.

“We want to start a little faster, let’s start with a little more intensity,” Nelligan said.

Now, Maryland will head to State College, Pennsylvania, for the second time this season to take on Penn State and No. 22 Ohio State. The Terps will look to get off to a hotter start this time around and improve their scores — and record.

Nelligan’s squad was originally scheduled to compete in Ann Arbor, Michigan, on Friday evening, but a postponement between Illinois and Michigan State caused the Big Ten to make a flurry of schedule changes. But Nelligan expects the extra time and change of location to only help his team.

“It’s an arena that we’ve already competed in, so maybe there’s some comfortability there,” Nelligan said. “And we’ve got an extra two days to train and to get an extra rest day in this week, so we can really fine-tune our work.”

This will be Maryland’s fifth and final away meet of the season. Traveling so often comes with its wear and tear on the athletes’ bodies and minds, but Maryland stands to benefit from the shorter bus ride to Penn State.

And competing in a tri-meet will allow the Terps to complete the four events in Olympic order and end on bars, the team’s worst event this season. Maryland has had at least one fall on the apparatus in every meet so far.

But this could play to the Terps’ advantage if they can get off to the hot start they’re aiming for.

“We’re going to be able to use our energy from our other events and finish strong,” Silberman said.

Despite not quite hitting the scores the program has been accustomed to in years past, the team remains confident in its abilities as it looks to put together its first complete performance of the season.

Maryland has failed to avoid a fall in all 24 routines of a meet so far, but it hopes the two extra days it will spend on perfecting routines and recovering from its trip to Iowa will be what it needs to put all the pieces together in all four rotations.

And with a focus on flexing their “see-the-positive muscles” during this unusual season, Nelligan has remained impressed with his group.

“It would be easy to be frustrated because we still haven’t had the meet that we know we’re capable of,” Nelligan said. “What I’m pleased with is it doesn’t deter them … It doesn’t deter them from thinking, ‘Hey, this is the meet where we put it all together,’ and I’m really proud of that.”

And Nelligan hopes a turnaround in the tri-meet at Penn State will light a spark in his squad for the rest of the season.