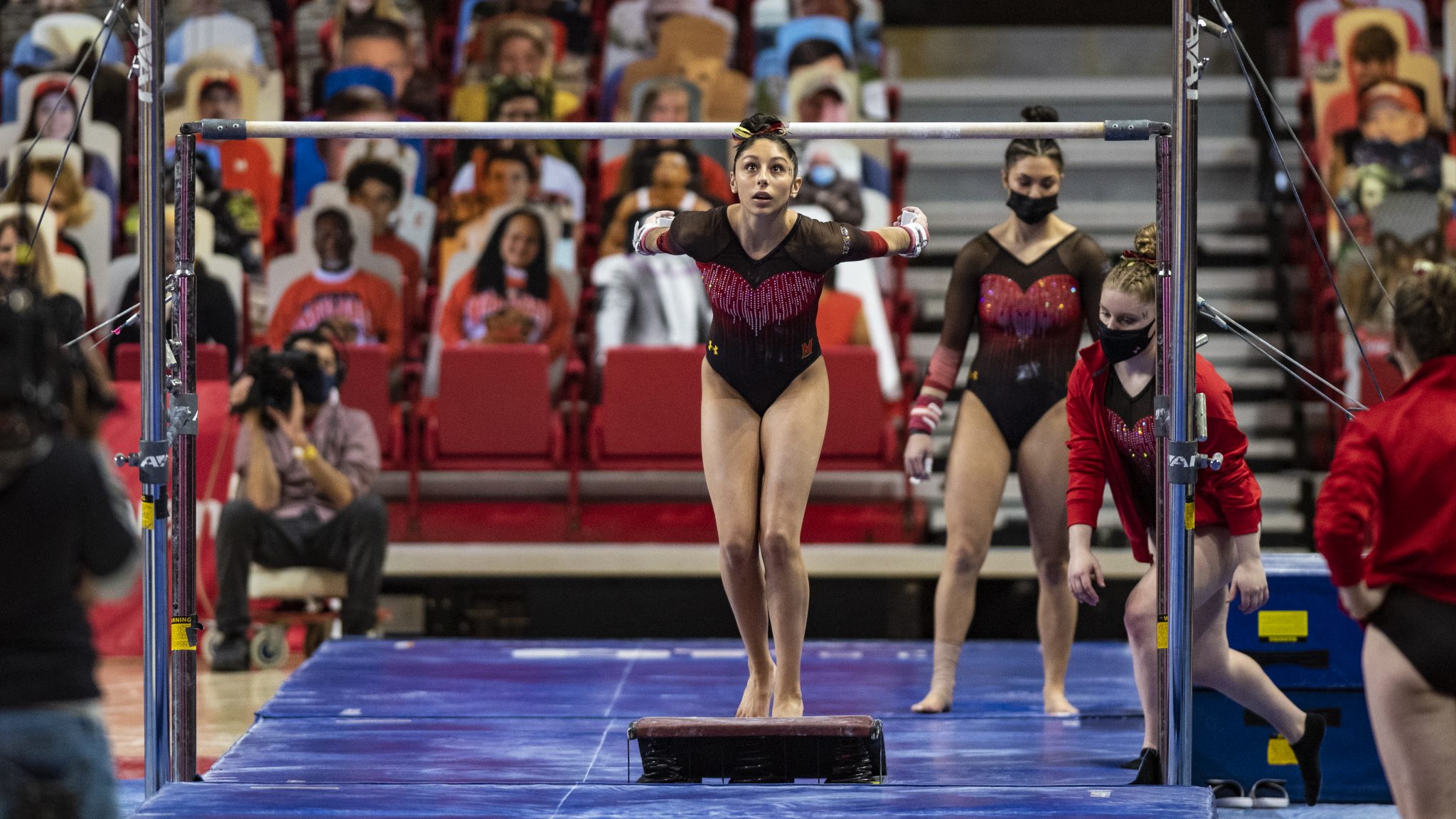 Sophomore Aleka Tsiknias prepares for the uneven bars during Maryland gymnastics' meet with Rutgers on March 3, 2021. She scored a 9.825, part of the Terps' 196.025 effort for the day. (Eric Harkleroad/The Diamondback)

Senior Audrey Barber executed an athletic somersault during the second pass of her floor routine. With a stuck landing, she gave a look of confidence towards the judges. Maryland gymnastics needed a high score, and Barber sought to deliver.

Despite the pressure of helping her team reach its second 196 of the season, Barber pulled through with her performance and earned a 9.90.

And with that final performance to close Wednesday’s meet against Rutgers, the Terps broke the 196-point barrier for the second time this season, earning a 196.025.

“It just kind of felt like practice,” Barber said. “We were super calm, but at the same time our energy was high and we were super excited for it.”

Entering the evening, coach Brett Nelligan’s squad knew it needed to work together to overcome the loss of all-arounder Emma Silberman to a torn ACL and make up for the impact she has on her team’s scores.

But it looked like Maryland would be off to a slow start in its first rotation on the vault. Sophomore Reese McClure led off the lineup with a 9.75, while senior Collea Burgess and junior Alexsis Rubio also unspectacularly scored below a 9.80 in each of their routines.

Sophomore Aleka Tsiknias made up for some of the Terps’ difficulties on the apparatus with a team-leading 9.85, filling in for Silberman. Her routine was met with an eruption of cheers from the Maryland sideline.

Barber notched a 9.825 of her own, salvaging what would have otherwise been a subpar performance for Nelligan’s squad. The Terps earned a 48.925 on the vault.

Maryland picked it up on the uneven bars after a strong leadoff routine from Tsiknias. She earned a 9.825 after anchoring on the vault just minutes earlier. This routine ignited a series of stuck landings for the Terps, who scored their second-best 49.125 in the event.

Freshman Olivia Weir returned to the bars lineup after missing the Big Five meet due to COVID-19 contact tracing protocols. Despite not hitting the practice gym in the days leading up to the meet with the Scarlet Knights, she earned a season-best 9.80. Sophomore Sophia LeBlanc followed Weir with an effortless routine and stuck landing of her own, scoring a career-high 9.825.

“[Weir] looked great in warmups,” Nelligan said. “I trust her. We all have confidence in every one of the kids on this team that people can step up and hit routines when they need to.”

Barber led the way with a 9.90, solidifying Maryland’s successful evening on the apparatus.

The Terps did not easily replicate the successes it found on the bars during its third rotation on the balance beam. The opening half of the lineup faltered when LeBlanc notched a 9.675, while Weir scored a 9.55, one of her lowest marks this season.

McClure and senior Sabriyya Rouse turned it around for Nelligan’s group with a 9.875 and 9.825, respectively, as Maryland eventually posted another solid event score, this time a 48.90.

[After long absence, Sanya Glauber came into her own for Maryland gymnastics]

After three strong rotations, the Terps were primed to win the meet and return to an even record. They were on pace for another performance that would increase their national qualifying score heading into the postseason.

“That’s one thing that we’ve developed over the season, [that] is we really don’t get rattled or frazzled if we get off to a slow start or if there’s uncharacteristic landing,” Nelligan said. “We know to stay calm, stay in our zone and then build the scores from there.”

But once again, during the floor exercise, Maryland was slow to start. Tsiknias led off with a 9.775, and while it was an improvement from the struggles she faced during the Terps’ last two meets, a stumble in her final pass cost her a higher score.

Another pair of stumbles during Rubio’s routine and a fall from Rouse made it appear as though Maryland was on pace to fall short of the 49-point mark in the event for the second consecutive meet. The Terps had accomplished the feat in their first seven meets and needed a strong finish to restart that streak.

They got just that. Two 9.90-worthy performances from Burgess and Barber pushed Nelligan’s group past that mark and sealed the victory.

With another recovery from a rocky start to a rotation, Maryland earned its second-highest team score of the season with a 196.025. Undoubtedly, the Terps will need their gymnasts to step up again in the coming weeks with Silberman’s absence.

But they passed their first test with ease.

“The way everybody stepped up tonight was honestly incredible,” Barber said. “It was definitely a team effort from everybody, us all cheering, we were all in for every single routine that everybody put up today.”