Maryland softball takes one of two from Purdue 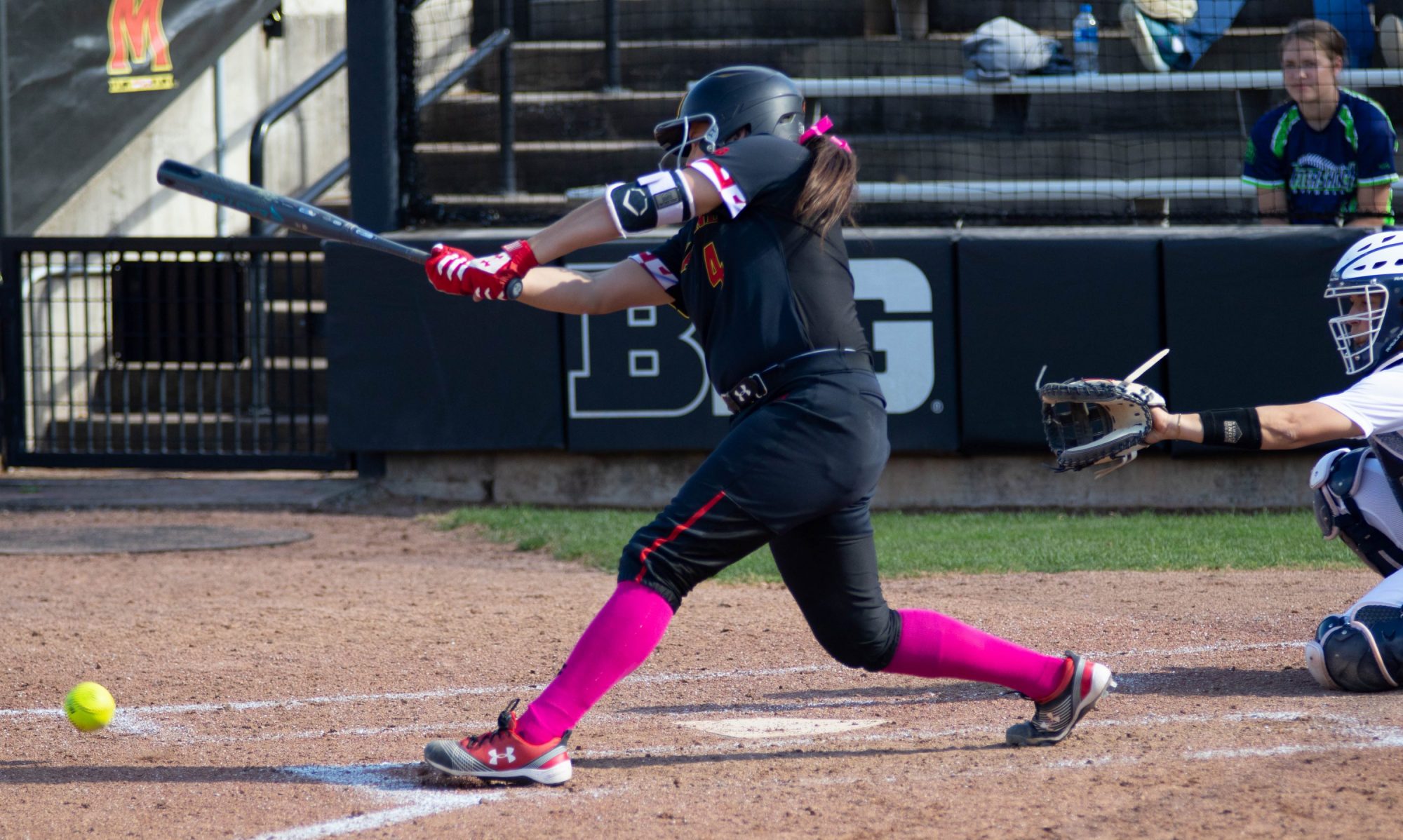 With the bases loaded and the game tied in the bottom of the seventh inning, Purdue infielder Rachel Becker stepped up to the plate with the game hanging in the balance.

Becker waited patiently, watching the first two balls whiz by her as she awaited the perfect pitch. And after a Haley Ellefson fastball fell right into Becker’s wheelhouse on the next play, she took advantage.

Becker connected with the pitch, sending a missile down the left field line and over the head of Maryland’s outfielder for the walk-off single. Becker pranced to first base, watching her teammate tag up at home as Purdue’s bench erupted with cheers of victory, winning the game 2-1.

Becker’s late-game heroics helped force a series split between Purdue and Maryland softball, as the Terps defeated the Boilermakers 4-1 earlier in the morning.

The first game between the Terps and Boilermakers quickly became a duel of two confident pitchers, as neither team was able to garner much momentum in the batter’s box early.

Maryland garnered its first offensive chance of the day in the bottom of the fourth inning, as infielder Taylor Okada roped a triple past the Boilermaker defense to put herself in scoring position.

However, after a line drive flyout later in the inning, Okada was gunned down at home plate by a Purdue outfielder, squandering the Terps’ chance to strike first in the opening contest.

The Boilermakers responded in the top of the fifth with an opportunity of their own, as a one-out double by Becca Jones put the pressure on Schlotterbeck and the Terps. Later in the frame, with runners on first and second, a lined shot up the middle by Becker was driven towards Maryland outfielder Jaeda McFarland, who was unable to come up with a diving play in centerfield.

Jones scored easily from third, jogging to home plate to give the Boilermakers an early 1-0 lead in the fifth inning.

However, the Terps responded in the bottom of the frame.

An early Gracie Voulgaris single was followed up by a walk, putting runners in scoring position. Outfield JoJo McRae then sent a sizzling shot down the left-field line to knot the contest at one run a piece.

McRae’s double forced Purdue coach Boo De Oliveira to implement a pitching change, canning Peters in favor of reliever Alex Echazaretta. Her stint at the mound was short lived, though, as a McFarland single drove home two more Maryland runs, stretching the Terps’ lead in the bottom of the fifth.

With Echazaretta struggling to find her rhythm, Maryland continued to pour it on, scoring one more off an Okada single to push the edge to three through five innings.

That lead would hold for the remainder of the contest.

Schlotterbeck continued to dice up Purdue’s batters, allowing just four hits en route to a 4-1 victory in game one.

[Maryland softball leaned on its pitching staff during its opening weekend]

The low-scoring start that epitomized the first matchup between the Terps and the Boilermakers was replicated in the rematch later in the afternoon.

With two outs and the game knotted at zero in the bottom of the third inning, Becker connected with a Jennifer Brann fastball, floating a shot deep into Maryland’s outfield. McFarland sprang into action, hawking the fly down and laying out for an impressive diving snag to save a potential Purdue score.

Despite McFarland’s scintillating play, both the Terps and Boilermakers remained stagnant throughout the majority of the contest. Heading into the sixth, Maryland had accounted for just two hits in the contest, while Purdue had three.

Then, that all changed.

After an error and a subsequent steal put a runner on second base for the Terps, infielder Regan Kerr stepped up to the plate with the game knotted at zero late in the frame.

Kerr sized up Sydney Bates, unsuccessfully attempting a bunt on the opening pitch of the at-bat. And while Kerr was caught looking at the first pitch, she would not be fooled again.

She unloaded on the next pitch, hammering a fly ball out of the infield and past the Boilermakers’ outfielders for an RBI triple– a play that would give Maryland its first lead of the second contest.

However, the Terps weren’t able to hold on for the sweep. Purdue’s bats came to life in the seventh, as a Kiley Goff triple followed by a Peters single tied the game at one late in the seventh inning.

And as Becker’s single dropped in left field, Maryland’s fate in the second contest was sealed. Following the series split, the Terps moved to 4-4 on the season, after showing fight against a Big Ten foe.