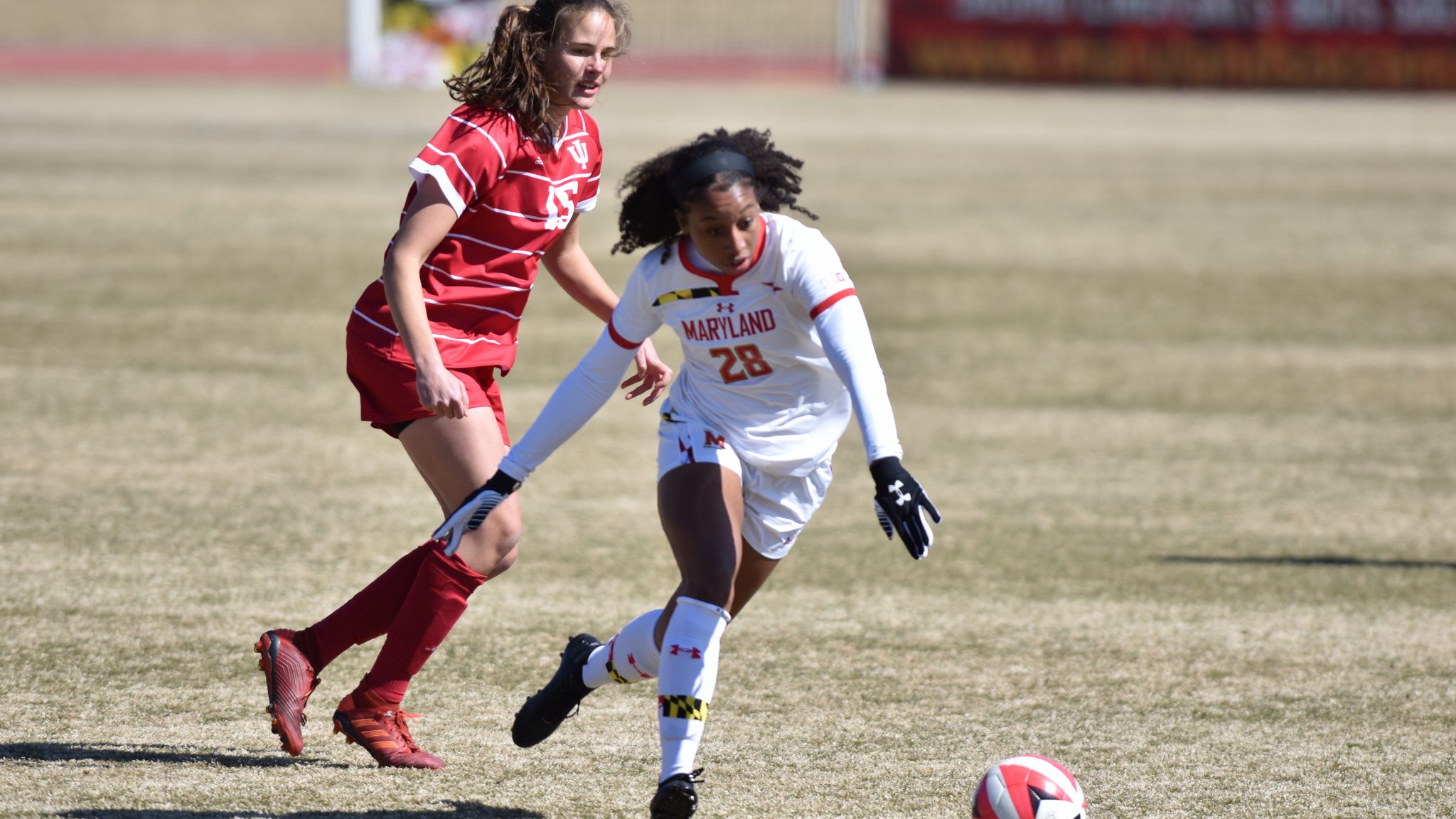 After 508 days, Ludwig Field was alive once again.

But the joy wouldn’t last long. Less than a minute later, Jen Blitchok knocked in the winning goal, finding an inch of space in the box and nodding in off a corner.

And it was enough for Indiana to dispatch Maryland in a back and forth home opener at Ludwig Field, 3-2.

Coach Ray Leone’s squad returned to its home field with hopes of breaking the slump and getting its first win of the season. But in its way stood a strong Indiana (2-1) side.

And the Hoosiers delivered on their superior record in the early goings. In the thirteenth minute, Indiana proved themselves as clinical as advertised, scoring the first goal of the game. Blitchok whipped a shot, which traveled past Terps goalie Nicole Kwoczka straight to the back left corner of the net.

The Maryland response, though, was swift.

Less than 10 minutes later, Maryland midfielder Sydney Staier charged up the left-hand side of the field and slid a pass across the net to Alyssa Poarch, who timed her run perfectly. Poarch swiftly sent the ball straight to the back of the Hoosiers’ net, sending Maryland into a wild celebration.

Indiana created multiple chances afterward, with unsuccessful shots by Oliwia Wos, Anna Bennett and Bria Telemaque. Despite the failed attempts to manage another goal, Indiana appeared to dominate the field — keeping the ball on Maryland’s side for a majority of the first half.

It’s been a common sight for the Terps thus far this season. Despite the stats going against Maryland’s favor, it has managed to hang on by a thread in each and every game. And that was the case Saturday, as the Terps went into the break tied at 1-1.

At first, the second half appeared to be more equal, with shots on net by both teams in the first few minutes. Poarch attempted a shot into the bottom left corner of the net and Mikayla Dayes took one as well — but both attempts ended unsuccessfully.

Despite the Terps’ pressure, it was Indiana who scored the first goal of the second half.

The Hoosiers’ Alaina Kalin charged the ball up the left side of the field and took a powerful airborne shot on Kwoczka, which soared over her outstretched hands and into the net.

With a score of 2-1, Maryland pushed for an equalizer. And it eventually came. Wynn provided the goal, knocking it from a Poarch assist.

But that lead didn’t last long.

Indiana reacted to the Terps’ goal by reclaiming their lead less than a minute later.

The Hoosiers’ were granted a dubious corner kick — giving them the opportunity to score yet again. Wos sent the ball across the net where Blitchok was there to intercept with a header and score her second goal of the game.

And that would be enough on the afternoon. Though the Terps held on — and evaded numerous waves of Indiana pressure — the visitors proved to be too much.

With the loss, Maryland remains winless, searching for answers amidst a schedule that will only get tougher. But despite the loss, the Terps remain hopeful for the future.

“It’s a pivotal moment for our team for sure,” Poarch said. “ I think that in previous games we were lacking in, you know, bringing the grit and energy into every single game but I think today we proved a point that we’re not going to settle for a losing result. I think in the future and in future games, we’re gonna get that end result.”