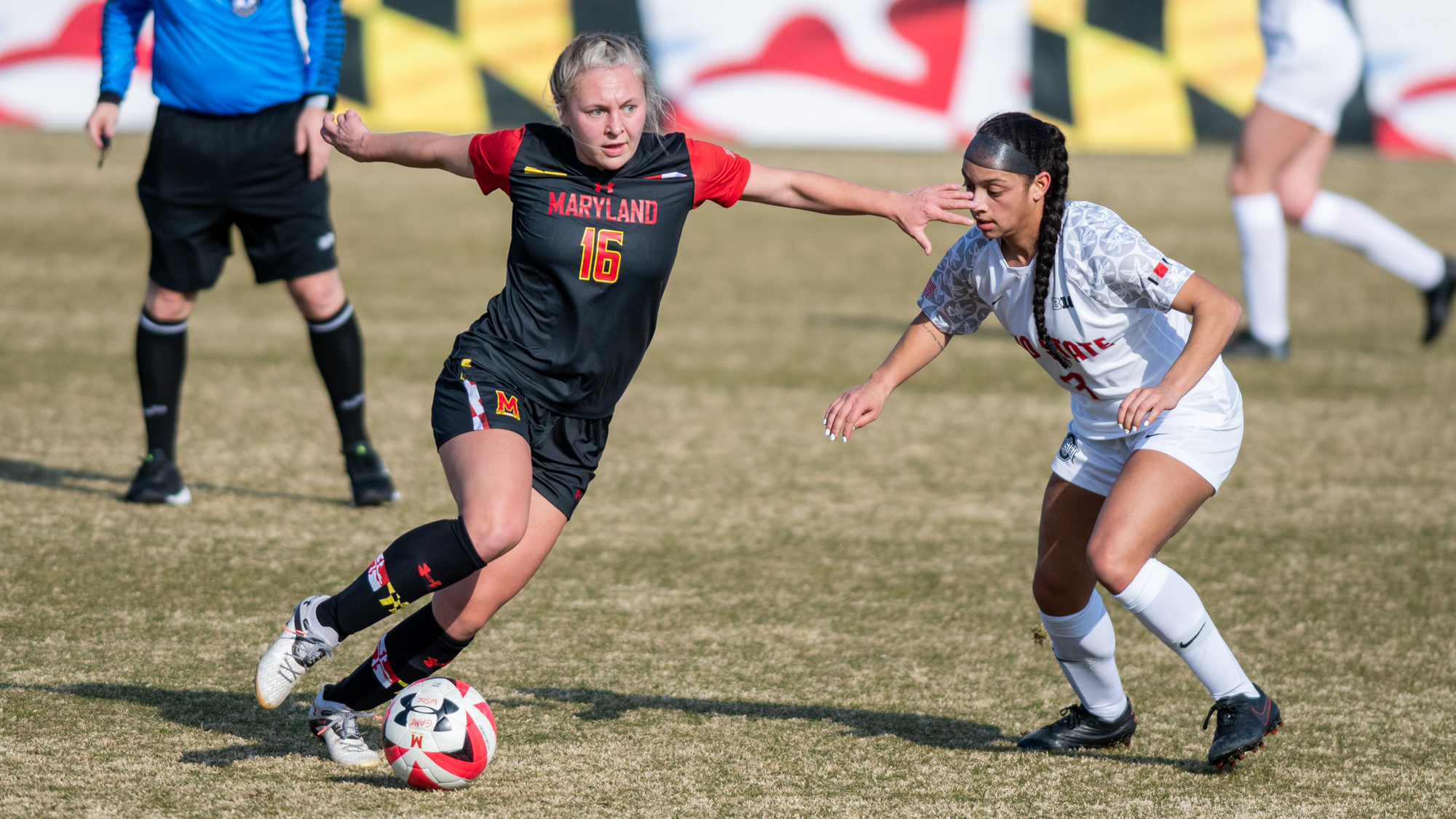 For the first time in over a year, Maryland women’s soccer returned to Ludwig Field to face Ohio State on Thursday.

And despite its best efforts, coach Ray Leone’s squad was unable to overcome a potent Buckeyes attack, falling 3-1 Thursday afternoon.

In their fourth game of the season, the Terps looked to prove themselves as a force to be reckoned with in the Big Ten conference. Although they had yet to secure a victory this season, the games were close, potentially setting the stage for an improved performance in College Park on Thursday.

However, the Buckeyes came to Ludwig prepared for battle. They tested Kennedy Tolson’s goal early, racking up two shots in the opening five minutes.

In the seventh minute, they pounced. Ohio State forward Peyton McNamara drove up the right hand side of the net before gracefully placing her shot into the bottom left corner. Tolson was beaten and Maryland found itself in an all-too-familiar position: down early.

But, as demonstrated through the first three games of the season, the Terps kept pushing.

And nearly 20 minutes after Ohio State found the back of the net, midfielder Sydney Staier decided to change the course of the game.

Forward Zora Jackson worked her way up the right side of the field, battling against multiple Ohio State defensive players. Once she was able to get enough control, she made a quick pass across the net to the feet of Staier.

Upon receiving the assist from Jackson, Staier rifled the airborne ball straight into the back of the net. Her teammates erupted with excitement. They had tied the game.

But the excitement did not last long. Five minutes after Maryland’s equalizer, McNamara returned once again to score her second goal.

McNamara, a freshman, shifted the ball to her right foot and sent a low drive toward Tolson. The redshirt freshman couldn’t push the ball away in time, though, giving the Buckeyes a one-goal edge.

The Terps were still in the game come halftime. They had matched Ohio State in shot totals and looked fairly dangerous in the final third.

But the Buckeyes were still a threat. And in the beginning of the second, they established their dominance.

The signs had been coming for Maryland. Goalkeeper Nicole Kwoczka, a halftime substitute for Tolson, denied a Brittany Duncan chance three minutes into the second half. A few minutes later, Kwoczka and the Terps were forced into action again, scrambling to stop another McNamara effort.

But Ohio State would soon capitalize on its growing confidence. Midfielder Kine Flotre found the net from a corner kick, securing an all-important third goal for the Buckeyes with just over 30 minutes left in regulation.

But the chances were few and far between. And come the end of the match, the Terps were left wondering what comes next. A third straight loss, this time on their home ground, has made the journey to build upon last year’s successes that much more daunting.