Maryland men’s soccer had a disjointed attack against Ohio State 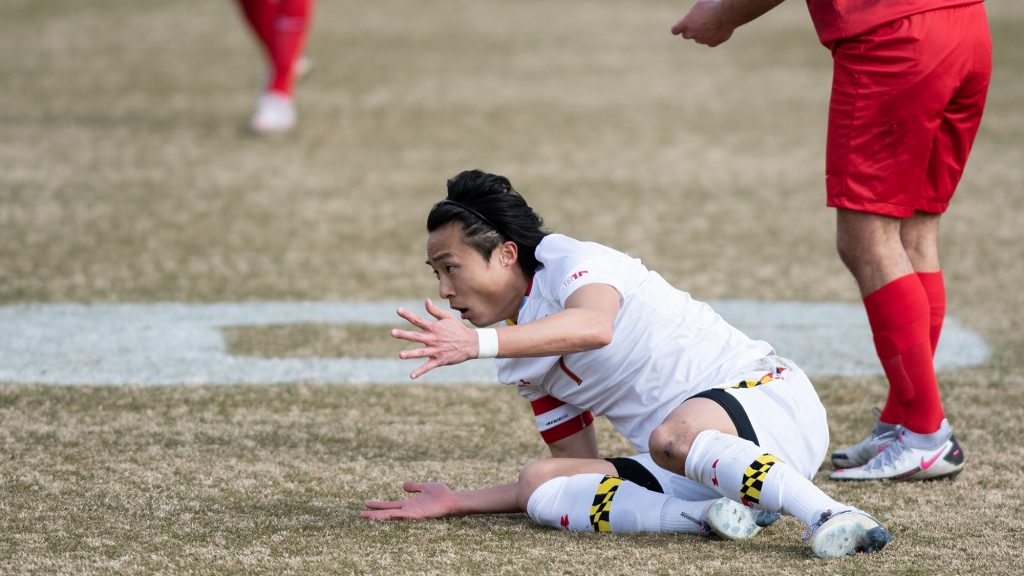 Brett St. Martin did all he could: swing his right leg.

The ball was bouncing around in Ohio State’s box, and the junior defender wildly chopped at the ball, sending it thumping to the ground and spinning toward the goal.

But Joe Ortiz cleared his awkward shot before it could cross the line, and the Buckeyes regained possession.

It was the closest Maryland would get on Saturday, when it had few clear cut chances.

And for a Terps squad that was supposed to lean on its dynamic offense, yesterday’s performance was lacking in that area as it struggled in the final third — lacking the decisive creativity to get on the scoresheet.

“It seems like when we’re up there, when we get into dangerous positions, there’s no one that’s, that’s got that dog to him, that wants to capitalize on the situation, and really make something happen,” forward Justin Gielen said.

Maryland looked listless on attack Saturday afternoon. In their home opener, the Terps tallied seven shots, of which only three were on target, leaving Ohio State goalie Noah Lawrence a spectator for most of the proceedings.

Coach Sasho Cirovski tugged at his mask in frustration or threw his hands in the air in protest several times throughout the game. His lineup seemed to have difficulty jelling over the course of the 90 minutes. Passes were wayward or late, touches were heavy and runs were slow.

Often, Maryland found itself knocking the ball around the back four, anticipating a run that never came. And often, in a moment of panic, a Terp would launch a long pass that either found a Buckeye defender or flew out of bounds.

The final third of the pitch was even more problematic. Maryland lined up with its usual three forwards and one central attacking midfielder. But that quartet of players loathed to connect, forcing offense rather than working the ball around.

Paul Bin and Ben Bender often tried to take on their defenders, but the Terps were outnumbered; if they beat one defender, another was there to clean up.

“We had nothing in the final third, we really played too safe, didn’t take any risks. Didn’t really get our foot in the ball,” Cirovski said.

And in those moments, the ones that required an extra bit of creative flair to unlock a tight defense, Maryland would normally turn to the left foot of Brayan Padilla. Last year, the sophomore had a knack of scoring in games when the Terps looked disconnected up front. But coming off an ACL tear, the attacking midfielder has lacked that quality to produce moments of magic.

“He still has rust and still doesn’t have his fluidity,” Cirovski said. “We know he’s got a special left foot.”

So, the Terps went quietly Saturday afternoon. After the game, Cirovski stayed on the Ludwig pitch for an extra few minutes while his squad slumped to the locker room.

But Cirovski will have little time to reflect. In a rapid fire Big Ten slate — one in which the Terps will play every four days — he has no option but to get his team going in short order.

And in such a predicament, one attitude prevails.

“Looks like we’ve got a few more things to figure out,” Cirovski said.