Why are celebrities so weird about Judaism? 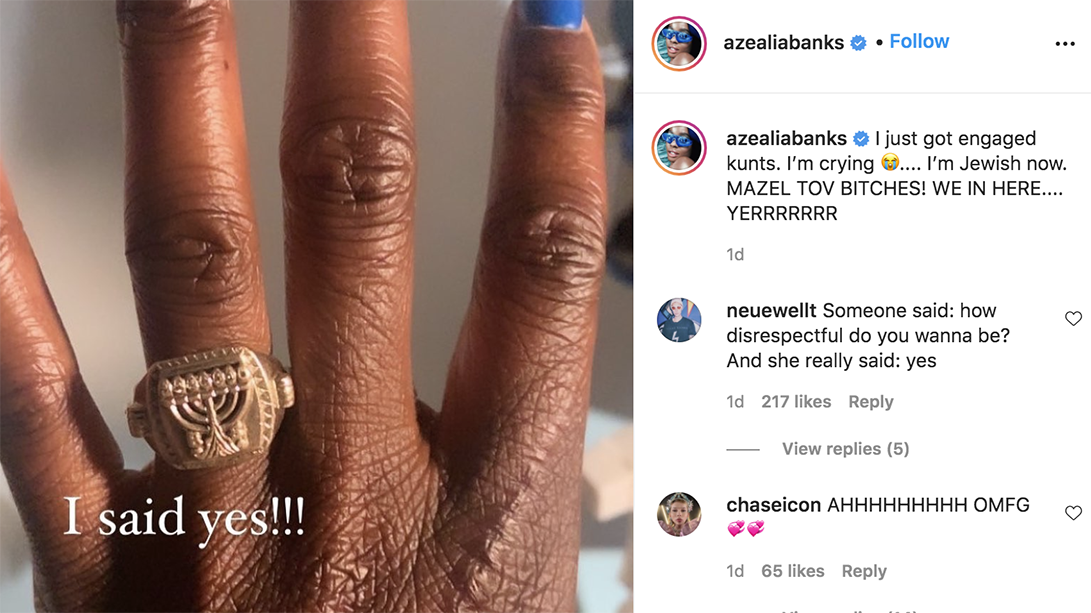 On Feb. 22, rapper and singer Azealia Banks announced her engagement to visual artist Ryder Ripps on Instagram. Banks shared a picture of her engagement ring with text that said, “I said yes!!! @ryder_ripps and I are engaged!!!!!!” In the photo, Banks hand doesn’t bear a traditionally flashy engagement ring. Instead of a stone, her ring depicts a menorah — a type of sacred candelabra used in Judaism to celebrate Hanukkah.

In her post, Banks stated that her engagement makes her “Jewish now.” The sentiment rubbed many the wrong way: When Banks called herself Jewish because she’s simply engaged to a Jewish man, she disregarded the cultural motions of the conversion process, critics said.

People were quick to call her out, and in typical Banks fashion, she snapped back with a transphobic remark. She compared gender-confirmation surgery for transgender women to castration, saying that society does “mental gymnastics” to accept trans women and should use the same mentality to accept her as a Jewish woman.

Banks continued equating the trans experience to her “becoming” Jewish in a series of transphobic comments. Unsurprisingly, she continued her tirade while also managing to say as many offensive things as possible.

Banks’ issues with the LGBTQ community are an entirely separate issue, but what her rhetoric on the Jewish community represents is the greater trivialization of the Jewish experience.

The experiences of Jewish people are often overlooked and deemed a nonissue. The Anti-Defamation League found that in 2019, antisemitic incidents hit an all-time high. And yet, these issues are seldom addressed in pop culture.

There are historical and cultural aspects of Judaism that don’t receive the mainstream coverage they deserve, which contributes to the perception of Jewish issues as “less important.” The biggest of these is a misconceived correlation of inherent privilege and Judaism. It seems like most people in the United States think of Jewish people as white and upper-middle-class. Banks even touches on this in her Instagram comments, attributing people’s resistance to her claims of Judaism to the purposeful exclusion of Black women.

This stereotype of Jews as a monolith is clearly untrue, but media portrayals of Jewish people continue to feed into it. Antisemitic tropes are littered across the media and have subtly skewed the way society views Jewish people. Giving big noses to cartoon villains who are stingy or greedy is a replication of historically antisemitic propaganda. As a result of these types of portrayals, society’s view of Judaism becomes so narrow that it’s not informed by reality. In reality, Jewish culture is widespread: There are Jewish populations in countries all over the world, from Argentina to Australia.

Banks is not the only celebrity who has minimized the Jewish experience, whether intentionally or not. In September, popular YouTuber Trisha Paytas came under fire for her comments on Judaism. Paytas has repeatedly made comments denigrating Jewish people and minimizing their experiences. People also accused Paytas of fetishizing Judaism after she made a series of TikToks “celebrating” Rosh Hashanah, the Jewish New Year. This also comes after her engagement to a Jewish man.

This casual caricature of Jewish traditions has made its way into the television world, too. RuPaul of Drag Race fame is often seen wearing a Star of David necklace on his show. In a conversation with Judge Judy, RuPaul mentions that he has learned Yiddish from her show and has worked it into his vocabulary. When he asks her about his pronunciation and says he has a “Yiddish word of the day app” on his phone, Judy responds saying, “Incorporating Judaism into your personality is maybe something you don’t need.”

Banks’ comments represent a conversation that we are still neglecting as a society. Judaism has a long and complicated history of oppression stretching back much further than the Holocaust — when my non-Jewish friends ask about our holidays, I joke and say that all Jewish holidays either celebrate someone not liking us, the new year or simply survival. We need to acknowledge the nuance of a religion and identity that is simply not a new accessory.