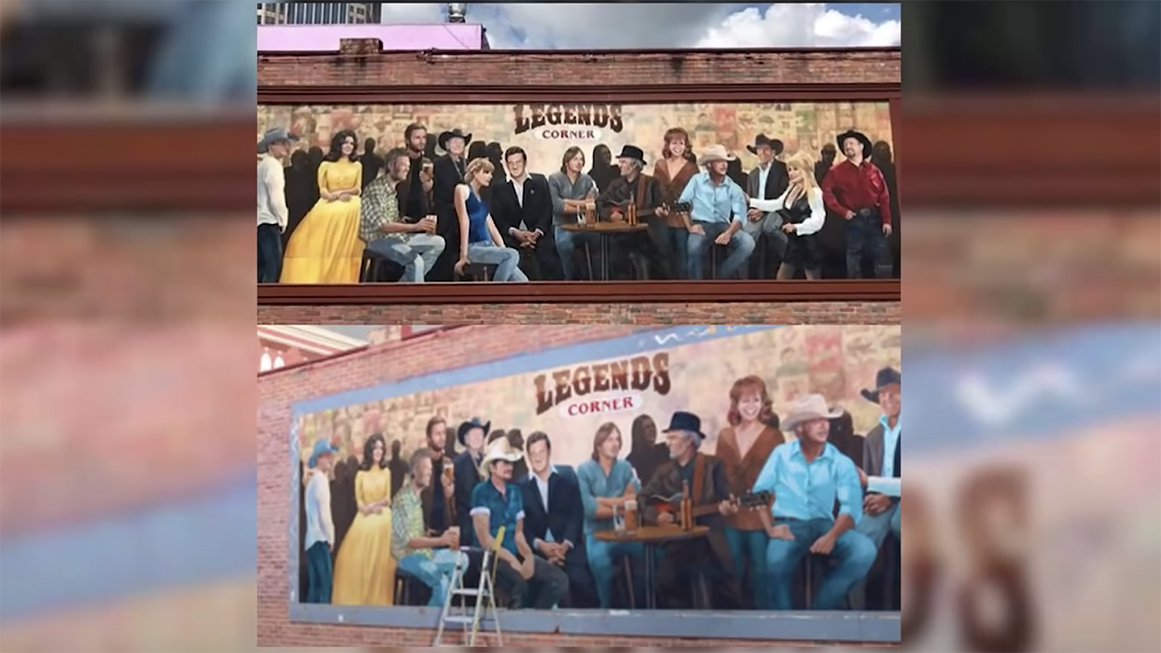 2020 was an insane year for Taylor Swift. Amid her fight for her masters against Scooter Braun, she vowed to rerecord her old music and released two surprise albums, evermore and folklore. Finally, she announced that she finished rerecording Fearless along with previously unreleased songs. She released her new version of “Love Story” on Feb. 12, the lead single from the album.

The rerelease of the most awarded country album of all time is exciting, but her choice to tackle this one first is ironic. In December, after the monumental year Swift had, Nashville’s Legends Corner Bar removed her from their iconic mural. It includes some of country’s most notable stars, from Dolly Parton to Johnny Cash and Keith Urban. Swift was removed from the mural, making room for Brad Paisley.

While Swift has praised Paisley for helping her during her career, her removal from the mural, which is supposed to represent the best of country music’s past, present and future, is indicative of the many problems within the genre.

“I have heard many complaints here in Nashville about Taylor being on the wall with country legends since she is currently focused mainly on pop,” said mural artist Tim Davis for USA Today.

However, a young Swift actually managed to popularize country music across the United States and overseas. Her lyrics and persona went against the camo-wearing, tractor-driving, beer-drinking image that many people had of mainstream country in the United States in the early 2000s. Her music had no hint of those tropes, which brought in swarms of new fans.

Before Swift, it was rare to sign young talent within the genre. Kacey Musgraves, Lucy Hale and Hunter Hayes are all stars that would have struggled to break in under 30 without her. She also made writing your own songs the standard rather than an anomaly.

[How to un-cancel yourself with a Notes app apology]

Now, she is being removed in favor of a man with a song entitled “Accidental Racist.”

“Some inebriated bar hoppers have spit on her image specifically, feeling betrayed by her venture from country. I guess this is to be expected, but by in large, the people of Nashville love her, as do I,” said Davis in the same interview.

This decision implies that country music has little interest in becoming more mainstream or expanding its audience beyond the stereotypical niche it has carved out. Praising talent was sacrificed to appease its target audience. If this was the genre that Swift was trying to succeed in, it completely makes sense why she would abandon it in favor of pop; there was no sustainable space for her talent anyway. She just wasn’t going to make “Love Story” a ballad about an unhealthy addiction to Bud Light.

In September, three months before her removal from the mural, she made her first appearance at the Academy of Country Music Awards in seven years to perform “betty,” a song off folklore. While the album is technically an alternative indie album, it is the closest Swift has been to country in years. This was yet another reminder that even though she was no longer creating typical country music, she had not completely abandoned her roots. This came 14 years after her ACM debut, where she performed “Tim McGraw.”

At just 17, Swift had already outgrown country music tropes. While “Tim McGraw” is still a great song, it was clear she was destined for more than Nashville’s expectation for her to write songs about driving in trucks along backroads with her boyfriend. Obviously, all genres have their unspoken restrictions, but country seemed more rigid than any other genre Swift would later break into.

Years later, her chart-topping hit “We Are Never Ever Getting Back Together” marked the beginning of the end, like a breakup anthem to country music. Swift is no stranger to a sad breakup song, but there is a reason that this one is so upbeat. While she continues to respect the country genre and its greatest talents, she should not return to an industry that does not respect her.