How to un-cancel yourself with a Notes app apology 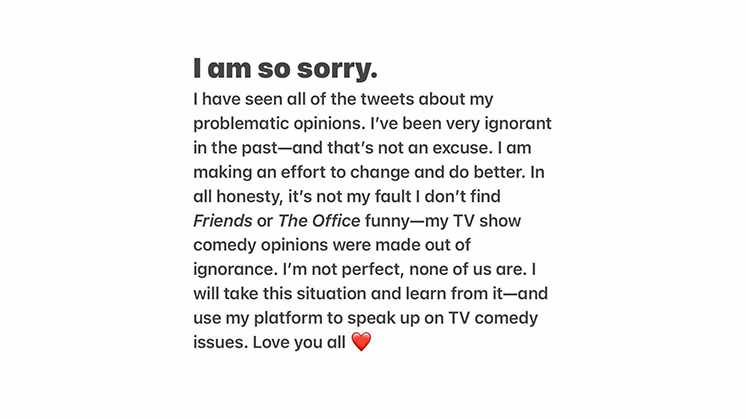 The art of the Notes app apology is a delicate one. (Daryl Perry/For The Diamondback)

As a result of increased time at home and the escapism provided by constant social media consumption, Twitter discourse has increased significantly.

Recent subjects include Justin Timberlake’s 2004 Super Bowl halftime show incident, where he caused a wardrobe malfunction for Janet Jackson (that greatly affected her career), and Chris Harrison’s comments in an interview with former Bachelorette Rachel Lindsay defending racist actions from current Bachelor contestant Rachael Kirkconnell. The conversations surrounding these situations induced apologies, which we should take at face value.

Which brings us to the Notes app apology. We’ve seen them countless times from countless ignorant celebrities. It’s like clockwork: Someone is called out for something problematic until they’re dragged on social media to the point that they have no other choice but to type up the most heartfelt of words with the utmost remorse and tweet a screenshot for the world to scrutinize.

We should take these situations as opportunities to learn from Timberlake, Harrison and the like on how to craft such perfect Notes app apologies. Here’s how:

1. Don’t be basic (unless that goes with your brand).

You can choose to write your apology in Apple’s pre-downloaded Notes app, or you can opt for something more professional and legitimate. Notes app apology is an umbrella term. White text on a black background or vice versa would work. You need something that will stand out and show you’re talking business and are sorry.

2. Explain how you’ve seen all of the discourse — all of it.

You’ve seen the private quote retweets, even the unpopular tweets from accounts with 87 followers — every single one. How are they gonna prove you haven’t, huh? You’ve got eyes everywhere.

[4 things to look forward to when in-person classes return]

3. Mention your past ignorance.

You didn’t know better then, even though a presumably large group of people around the world tried to “call you out” and “educate you” on your previous “ignorant” actions. And although you’ve seen all the discourse, it wasn’t enough to make you apologize until much, much later.

4. Explain how because of this ignorance, you are making it a point to change.

You will now educate yourself. No one’s exactly sure what you plan on educating yourself on because you won’t directly mention it, but they’re smart so they’ll figure it out eventually.

Not only will this align you with a better and stronger brand identity as someone who is genuine and can own up to mistakes, but it will please your ever-growing legion of stans. When someone outside of your fandom calls you out for your non-apology, your stans can clap back and mention that you actually did apologize because you said “sorry.” Checkmate.

[Why you should treat your Spotify like a journal]

Are you the host of a reality TV show, a pop star or a shapeshifter? No one can tell. Shift the blame. No, you are not the flawed one. The industry is. It props up people in your position. You have privilege, which you’re aware of now but weren’t before because of your … (say it with me) IGNORANCE. Remember, you can’t be fully at fault because of your previous ignorance, even though it was obvious that what you did was wrong.

But, also mention how your lack of perfection does not excuse your IGNORANT actions. Yes, you were a grown man. Yes, you knew right from wrong and still said or did terrible things. Again, you saw all of the discourse but didn’t know it was about you! It could’ve been about anyone in the industry. But you’re sorry now, okay? You’re sorry.

8. End with a message of hope.

This might be the perfect time to shoutout to your fans, similar to Notes app apology legend Logan Paul. The conclusion is the best place to emphasize your effort to grow and “do better.”

With these steps, you can create a successful Notes app apology that will officially un-cancel you, putting you back in the positive light of humanity. Repeat these steps whenever another controversy happens. It works every single time.