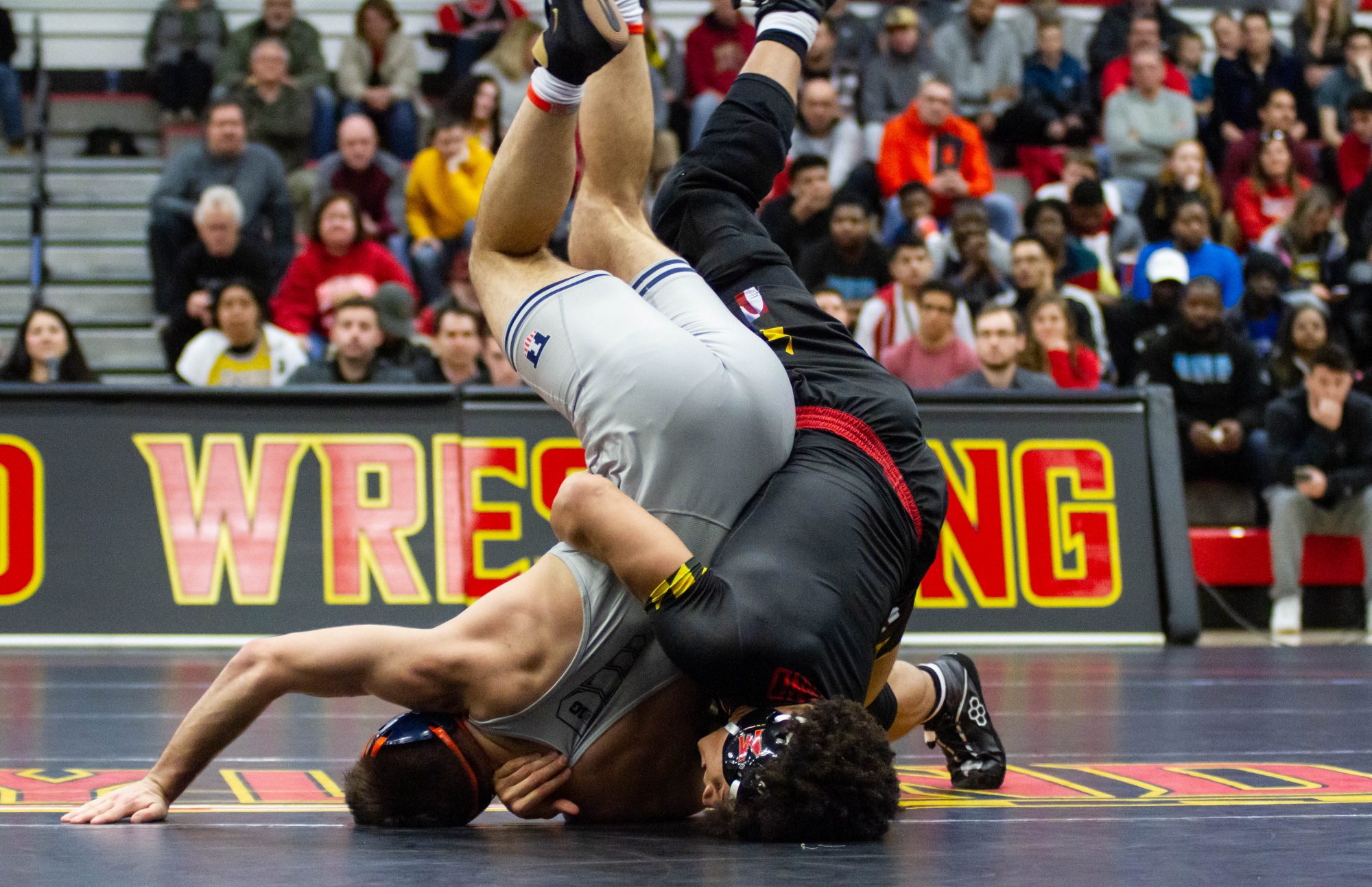 Jackson Cockrell showed fight for Maryland wrestling in his 133-pound bout, battling through the first period in a back and forth matchup. He worked Roman Bravo-Young, dropping him to the mat for an impressive takedown to tie the match at four. It was only the second takedown the two-time All-American Bravo-Young has given up all season.

Cockrell would end up falling to Bravo-Young, 24-13, via major decision. It was the closest the Terps would get to victory against No. 2 Penn State, losing 44-0. Still, Cockrell’s fight was emblematic of the battling Maryland has done all season in the Big Ten — despite the scoreboards suggesting otherwise.

“After that takedown, I just have to continue in my mind to say to myself, ‘Stay disciplined and keep wrestling, keep moving forward to getting to my stuff,’” Cockrell said. “I was good until he started moving me around and I gave him a chance to start getting himself back on his pace.”

Garrett Kappes was looking to get the Terps off to a quick start in an uphill battle against the Nittany Lions. Instead, he was taken down twice in the opening minute by Greg Kerkvilet before being finished off by way of pinfall.

Zach Spence suffered the same fate, being outclassed by Penn State’s Robert Howard. In the second period, Howard took him to the mat with a half-nelson. He was eventually finished off with a pinfall.

The woes continued for Maryland, as Danny Bertoni couldn’t get anything going in his bout, spending the majority of the match on the mat against Nick Lee. Bertoni gave up 4:18 of riding time, eventually dropping the match by major decision, 14-2.

In the 149-pound match, Hunter Baxter showed some signs of life. The redshirt junior avoided giving up bonus points and a major decision loss to Beau Bartlett. But three early takedowns put him in a hole he couldn’t recover from, losing by decision, 9-3.

Michael Doetsch found himself in a similar position, tied 2-2 late in the third period while appearing to gain some ground. However, Luke Gardner went on an offensive fury — securing a takedown and putting Doetsch in a leg cradle to secure a near fall and win by decision.

“I let my feet get a little stagnant and [Gardner] capitalized off of that,” Doetsch said.

Joe Lee dominated Jonathan Spadafora in the top position throughout the first period, and eventually hooked Spadafora’s leg to secure the fall.

Carter Starocci caught Jonathan’s brother, Philip, leaning and took him to the mat. And he didn’t look back, controlling the rest of the match and securing a late takedown — getting the bonus points for the major decision win, 15-6.

Kyle Cochran, the Terps’ best wrestler this season, faced a tough challenge against Aaron Brooks. And he couldn’t contain Brooks’ offense throughout the bout, losing by major decision, 18-5.

Jaron Smith came out hot against Michael Beard with an explosive takedown early. But Beard eventually wore him down with multiple takedowns in the second and third period to secure a major decision win, 13-3.

With the loss, Maryland finished the Big Ten season with a record of 0-8. The Terps are now shifting their focus to the conference championship.

But it’s the individual fight, the tussle of every bout, that Maryland can take from this season — and hope to build on in the years to come.

“We’re setting the foundation still, and the kids are working really hard,” coach Alex Clemsen said. “We’re doing everything we can, I promise you that.”