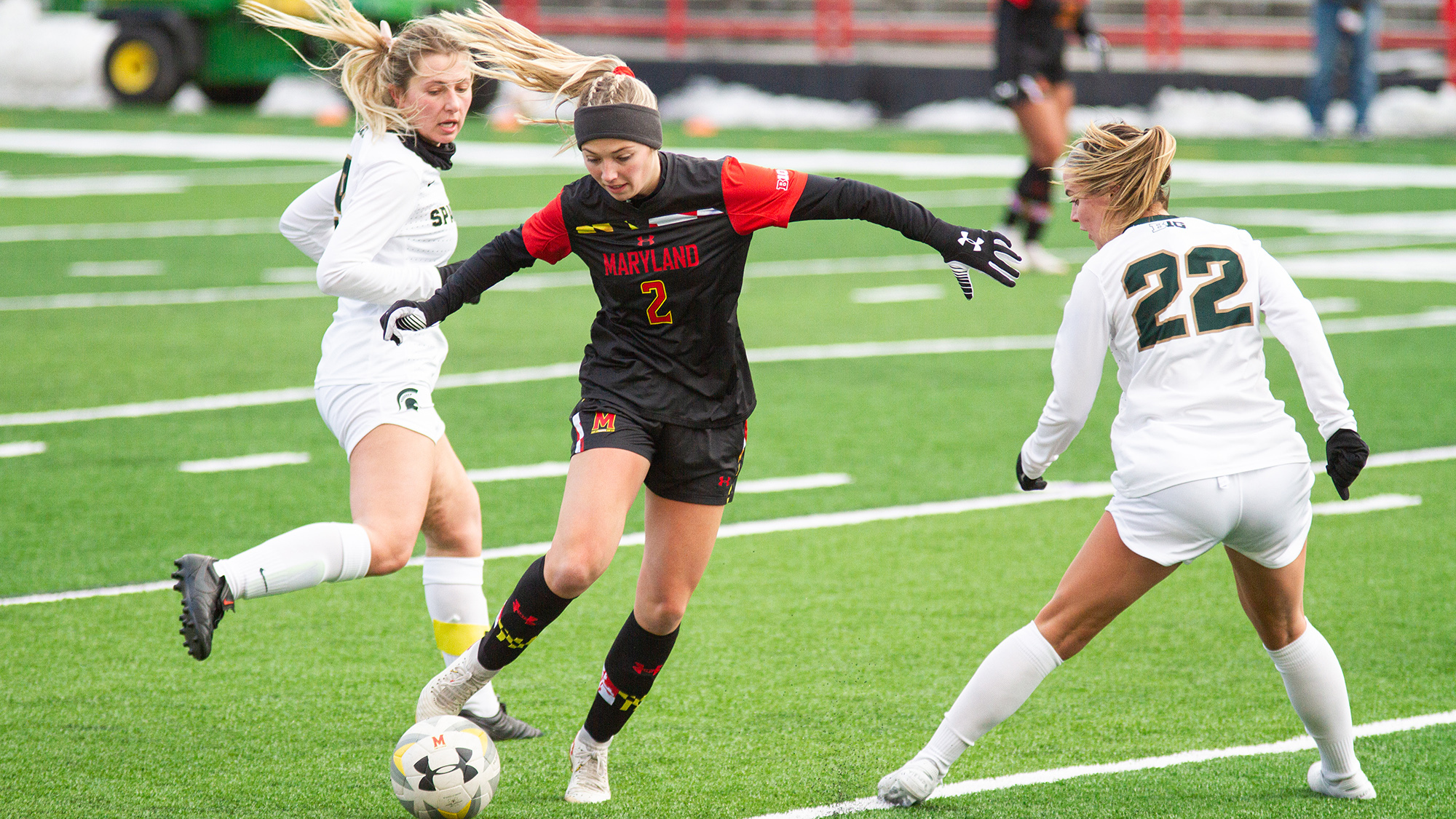 In the 89th minute of Maryland women’s soccer’s season opener against Michigan State, it seemed the Spartans would leave College Park with a victory.

That is, until the Terps’ Mikayla Dayes charged the net, slipped past multiple defenders and forced a deflected shot into the corner of the net. The strike tied the game and sent the match into overtime.

But no side could capitalize in the extra two periods, and the teams settled for a 1-1 draw in a back-and-forth season opener Saturday evening.

Due to inclement weather conditions, the game was moved from Ludwig Field to Maryland Stadium. And the transition from playing on a grass field to a turf seemed to have an impact on the Terps as they got off to a rocky start.

“I would say the biggest challenge was probably the weather factor,” defender Adalee Broadbent said. “It was super cold, windy. So, I feel like the person with the wind definitely had the advantage.”

An early Catherine DeRosa scoring chance was quickly negated as Maryland turned the ball over to Michigan State. And the Spartans asserted their dominance from that point on.

For the next few minutes, the ball wouldn’t leave the Terps’ half, as Michigan State took several solid but unsuccessful shots.

While the Spartans were aggressive in their offensive efforts, Maryland proved to be equally tough as a defensive unit. In the 25th minute, Anissa Mose made a vital tackle to keep the ball away from the Terps’ net — summarizing their solidity in the half.

And although Michigan State was persistent about keeping the ball on Maryland’s side of the field, Dayes and Sydney Staier managed to get shots on the Spartans’ net. However, Dayes’ shot traveled left of the net, while Staier’s effort was deflected away by Michigan State goalie Lauren Kozal.

And it stayed that way for most of the half, with neither team able to convert the few chances into a goal.

Just a few minutes into the second half, Dayes charged up the field and fired a shot on the Spartans’ net. But Kozal was once again in position to make an excellent save, the result of which ricocheted back to the Terps’ Emily McNesby — whose attempted follow-up flew over the post.

Both sides dug in from there, raising the intensity of the contest. And after multiple attempts to break the tie, Michigan State pulled through.

Forward Gia Wahlberg carried the ball down the center of the field, and fed Paige Webber. While Mose was there to reject Webber’s shot, the ball headed straight back to Wahlberg, whose bottom-left shot on net secured a 1-0 lead for the Spartans.

Maryland responded with more aggressive play. The Terps pushed up, seeking more opportunities. But their chances were few and far between.

Staier saw a speculative shot tipped over the bar. DeRosa’s drive at the net was blocked.

And at the death, Maryland finally found an opportunity. Dayes scrambled through three defenders before deflecting the ball into the corner with just over a minute to play, drawing leaps and shouts of excitement from her teammate — and sending the game to overtime.

“I just kept going through it,” Dayes said, “and it ended up being a goal so, I’ll take it.”

The Terps pressed high in overtime, having the better of the play in the early stages. Michigan State registered the solitary shot, putting one wide with just over a minute to play.

And the Spartans were also more aggressive in the second period. A few shots flew over the net for the first five minutes, but none troubled Nicole Kwoczka. Meanwhile, Maryland failed to muster an opportunity of its own, and the clock struck zero without a victor.

Ultimately, it was Dayes’ strike that defined the match, with the teams forced to split the spoils in a highly-contested season opener.

So, after looking like the inferior side for 89 minutes, the Terps showed the necessary grit to snatch an equalizer — and hold Michigan State in overtime. It’s the kind of gutsy performance Maryland might need in a competitive Big Ten.

“I have missed this so much. Just going out every week and putting in our best effort. I’m just ready to play,” Broadbent said.

The Terps will be playing their next match against Purdue on Thursday, February 25th.