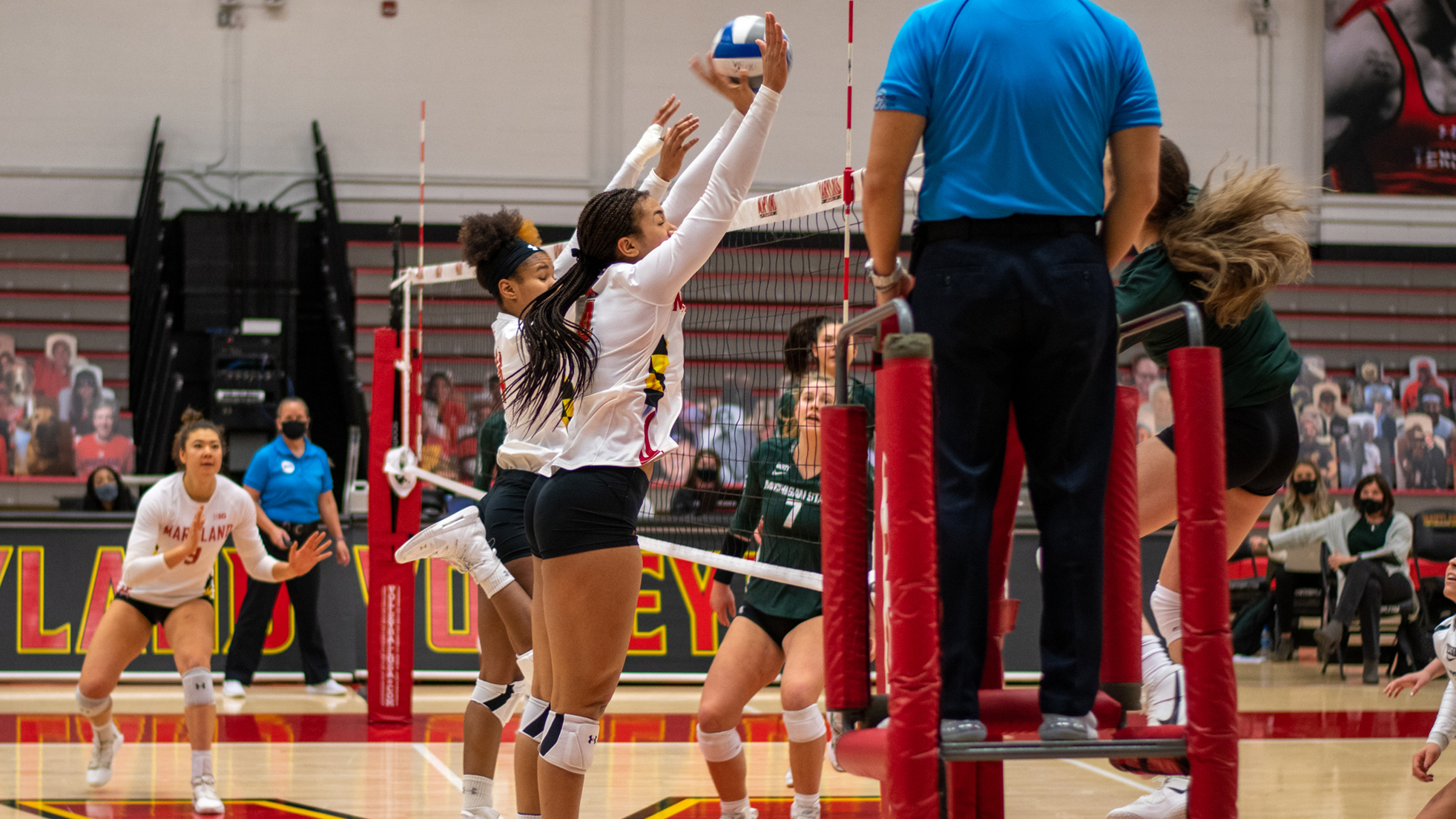 “Obviously we want to try and find ways to win those fifth sets,” coach Adam Hughes said. “I did think that Michigan went out and was able to take care of business, and [while] I thought they won the match … I’m not necessarily sure we lost the match.”

Coming off of a five set heartbreaker just 24 hours earlier, Michigan’s outside hitters found their rhythm early in the first set of Saturday’s contest.

Led by Jones, the Wolverines raced out to an early 17-9 lead, overpowering the Terps with a barrage of efficient attacks and three service aces in the first frame.

And with the Terps struggling mightily on the offensive end, hitting -.069 from the field, the Wolverines never looked back in the first set. Capitalizing off of a plethora of Maryland attack errors, Michigan’s Jess Robinson gave her team multiple set points with a blazing right-handed spike. And as a Rebekah Rath serve sailed wide, the Wolverines had sealed a convincing opening frame victory, 25-17.

So, the Terps found themselves in yet another 1-0 hole. And much like in Friday’s win, Maryland’s defense found its footing in the second set.

Back to back block assists by Rath and Cara Lewis spurred a 4-0 run for the Terps early in the second set, forcing the Wolverines to burn a quick timeout. Maryland’s lead would soon balloon to seven, as Michigan’s once explosive offense was forced into dormancy by a stifling Maryland defense led by Lewis and Rainelle Jones.

However, the Wolverines would soon regain form.

Outside hitter Jess Mruzik led the charge as Michigan rattled off four straight points to cut the lead to just three. Hughes was forced to burn a timeout of his own.

And while Hughes’ timeout helped to slow Michigan’s powerful comeback spurt, the Wolverines continued to dig themselves out of their early hole, knotting the match at 22 after a Kayla Bair spike fluttered past the Terps’ defense.

Then, an intense back and forth between the two squads ensued. Facing a Michigan set point, Jones and Ricks hooked up for a massive block at the net to push the set to a deuce. The Terps then garnered a set point of their own after an Erika Pritchard spike, only for the Wolverines to answer with a May Pertofsky putaway.

In the end, it was Maryland’s defense that put it over the top in the second set. After a Michigan service error gave the Terps their fourth set point of the frame, a Robinson kill attempt was rejected by Pritchard and Lewis up front, giving the Terps a competitive second set victory, 29-27.

“The defensive front was obviously our strength,” Hughes said. “I thought Laila Ricks came off the bench, she was another freshman that really shined. She had some huge blocks there, kind of turned some points.”

While the Terps raced out to an early lead in the second set of action, it was the Wolverines who drew first blood in the third frame. After a rain of kills deadlocked the set early, Michigan libero Hannah Grant began making her presence felt, coming up with multiple acrobatic digs that led to Pertofsky and Paige Jones putaways.

Michigan’s once narrow lead soon widened, as the Wolverines rekindled their first set spark to stun the Terps. And despite a late comeback attempt fueled by Pritchard, Maryland dropped the third set 25-20 after a Pritchard kill attempt bounced just inches past the Michigan endline.

While the first three frames of action were characterized by big runs from both squads, the pivotal fourth set proved the exact opposite. The Terps and Wolverines went punch for punch throughout the set, with neither team holding higher than a three point advantage in the frame.

With the set tied at 19, a spinning Pertofsky spike attempt was corralled by a diving Hailey Rubino, which led to Pritchard’s 17th kill of the evening. She would finish with 21 spikes Saturday night, another impressive display in a season increasingly filled with them.

Moments later, with the Terps now one point away from forcing yet another fifth set, Mruzik attempted a high-flying kill attempt, only to be denied by Lewis and Alford. The Terps’ 18th block of the night erupted the Maryland bench as Hughes’ squad took the fourth set, 25-23.

So yet again, the Terps and Wolverines would go the distance. And while it was Michigan who struck first Friday night, this time it was Maryland who jumped out in front. The Terps built an early 3-0 lead, forcing yet another Michigan timeout.

The early Maryland advantage was short-lived, however, as the Wolverines responded with a Pertofsky service ace sandwiched between a pair of spikes to tie the deciding set at five.

Bursting with liveliness after its mini rally, Michigan continued to pour it on. Robinson and Mruzik flashed their dominance, notching six spikes between them in the final frame.

Although the Terps huffed and puffed, pulling out a second straight dramatic victory over the Wolverines proved one one task too many. Pritchard suffered an attack error, gifting Michigan a set point opportunity.

Jones took her chance with aplomb, swatting away an errant Ricks effort to give the Wolverines a much-needed victory.

It was a disappointing result for Maryland, who fell just short of securing another come-from-behind victory. But, it was a wildly entertaining game — and series.

Now, Maryland returns home invigorated, hoping to recapture the form that helped the Terps stand toe-to-toe with one of the Big Ten’s most talented sides.

“I think [this series] gave our team confidence and allowed us to be mentally tough,” Ricks said. “We’re not letting [our record] define us, and we’re coming to each game with the same thing on our mind which is just play our best game, and really do what we can do.”