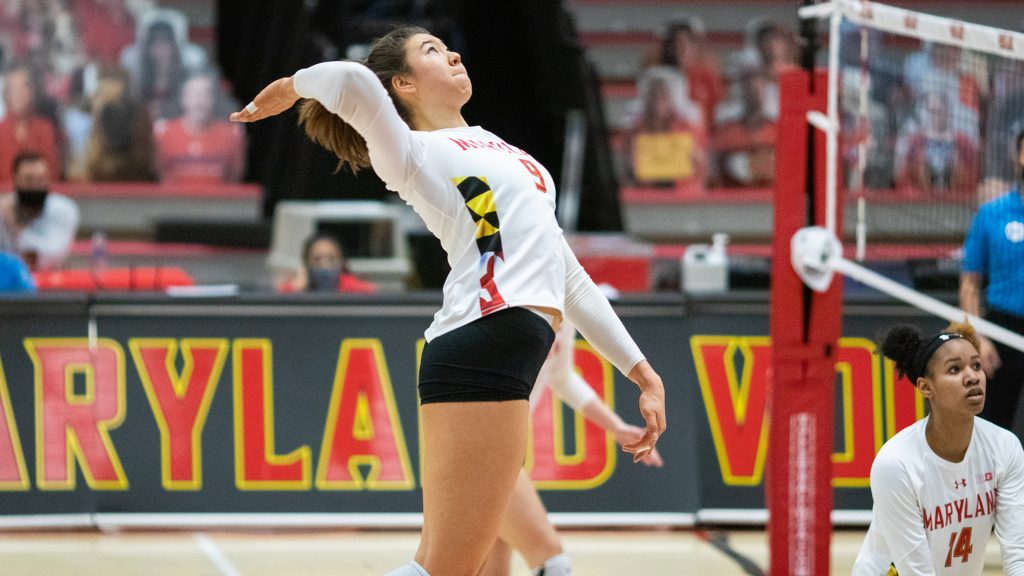 Outside hitter Erika Pritchard leaps for the kill during Maryland volleyball's 3-1 loss to Michigan State on Feb. 12, 2021, at the Xfinity Center Pavilion. (Julia Nikhinson/The Diamondback)

After a Michigan service error gave Maryland volleyball multiple match points late in the deciding fifth set, it was up to libero Sam Burgio to put the ball in play.

Burgio lobbed the ball over to the Wolverines front, who parried weakly. That gave outside hitter Erika Pritchard the opportunity to give the Terps a victory.

Middle blocker Cara Lewis set the tone early in the first set for the Terps, converting on a high-flying spike into the heart of the Wolverines’ defense. But Michigan soon responded behind the swing of Jess Robinson, as the middle blocker put three straight spikes away to force Hughes to burn two early timeouts.

Behind Robinson’s four first-frame kills, the Wolverines looked to be cruising towards a comfortable first set victory, at one moment garnering a seven-point lead midway through the set. But a furious Terps comeback led by middle blocker Rainelle Jones and outside hitter Rebekah Rath pulled Maryland back within striking distance.

But the Terps weren’t able to capitalize.

A Jess Mruzik kill was followed up with a Hannah Grant service ace, adding to Michigan’s lead ever so slightly. Soon, Maryland was on the brink of yet another opening set loss. And as another Wolverines’ kill dropped on the Terps’ side of the floor, Michigan had successfully fended off Maryland’s comeback hopes, taking the first set 25-21.

The frenetic pace that encapsulated much of the first frame spilled over into the second, as both teams exchanged early leads.

And while Pritchard and Jada Gardner continued to impose their will on the offensive end throughout the set, it was the Terps’ defense that kept the frame within reach.

With Maryland trailing 18-16, Wolverines’ outside hitter May Pertofsky attempted to garner her sixth kill of the evening with a pounding right-handed spike, only for it to be rejected by the awaiting Jones.

“I think our blockers are fantastic,” setter Nicole Alford said. “We were really committed to our scouting report … we knew the plays they wanted to run.”

The Terps’ efforts up front paid off late in the second, as a rejection by Laila Ricks and Cara Lewis gave Maryland the opportunity to even the score. And this time, the Terps would not be deterred, taking the second set 25-23 following back-to-back Michigan attack errors.

With the match now squared at one set a piece, Maryland came out with a blistering pace in the third frame.

And while the combination of Pritchard and Rath continued to rack up kills, the Wolverines’ outside hitters regained their footing. Paige Jones, who had been relatively quiet through the first two sets, exploded for five kills in the third set, helping her squad quickly erase its early set deficit.

[After biding her time on the bench, Sam Burgio has been a spark for Maryland volleyball]

So, yet again, Maryland and Michigan battled to the wire. After a Lexy Finnerty service ace gave the Terps some breathing room late in the frame, Rainelle Jones pounced on the Wolverines, registering yet another block to give Maryland multiple set points.

With the prospect of grabbing a 2-1 lead on the horizon, Jones was relentless. After a Michigan serve was dug by Pritchard for an Alford set, Jones dropped the hammer. She spiked home her first kill of the match to push the Terps to one frame away from their first victory.

However, the Wolverines wouldn’t go down without a fight.

With a new sense of urgency on the brink of defeat, Michigan grabbed the reins early in the fourth set. The Wolverines rushed out to a 13-8 lead and never looked back, seemingly gaining more confidence with each swing as Maryland’s offense floundered.

And as a Rath kill attempt was stifled by two Michigan defenders, the Wolverines had run over the Terps, 25-18, to bring the match to a deadlock.

The deciding fifth set of action, much like the match as a whole, was a game of runs. Michigan landed the first blow, jumping out to a four-point lead after a service error by Pritchard was immediately followed by a Pertofsky ace.

Then, it was Maryland’s turn. The Terps rattled off six straight points, flipping the momentum and taking a lead they would not relinquish. Then, relief.

As Pritchard’s kill fluttered to the ground, it not only ended the match — it squashed Maryland’s losing streak and gave the Terps new life.

“We’re better than what our record says,” Jones said. “We just need to keep on getting those wins and those upsets against big teams.”