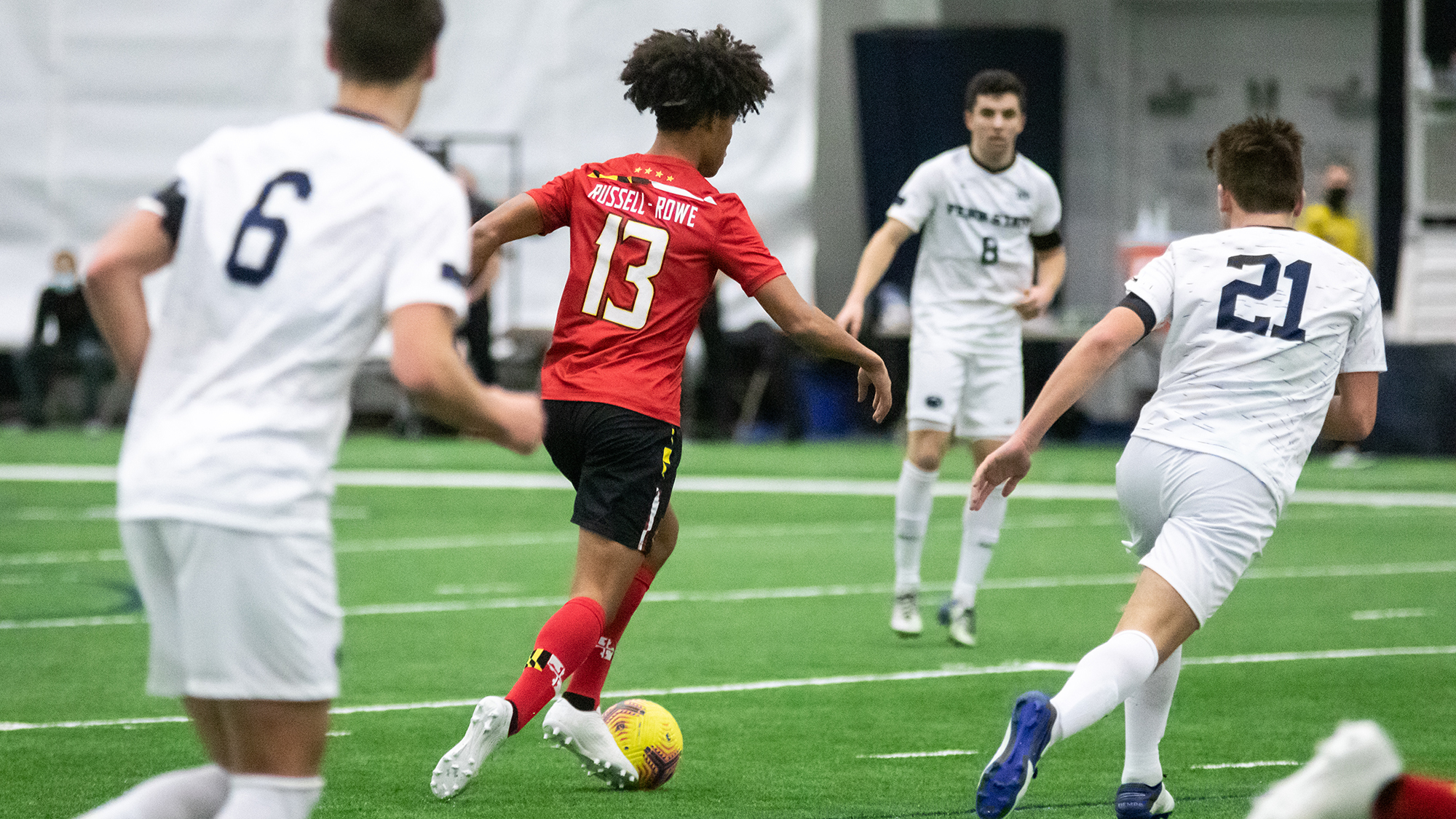 He was in acres of space, as three Maryland men’s soccer defenders stood off him.

And the Penn State midfielder took the opportunity. With one swing of his right boot, he sent the ball flying into the top corner from 25 yards out.

The goal put the Nittany Lions up 2-0, a commanding lead against a Terps side that looked ragged for much of the opening 45 minutes.

And despite a furious late-game rally, Maryland couldn’t claw back, dropping its season opener at the No. 23 Nittany Lions, 3-2.

Though the Nittany Lions’ chances were few, their finishing was clinical. The Terps conceded three first half goals, including two off defensive errors. While Maryland pushed hard for a second half comeback, it couldn’t score a decisive third against a solid Penn State backline.

“There’s a lot of positives to take away. But I hate losing, hate the way we started, and we’re going to have to correct that next game,” coach Sasho Cirovski said.

Cirovski noted before the game that defense might be a work in progress in the first few matches of the season. That seemed to be the case Friday night. He fielded two relatively inexperienced defenders against a physical and pace Penn State attack, giving Nick Richardson and Isaac Ngobu tough assignments in the season opener.

That duo faced heavy pressure in the early goings. Penn State attacked the Terps’ full backs, pinning the backline deep into its own half.

“It took too long for us to adjust, and they kinda hit us on counters,” defender Brett St. Martin said.

And the Nittany Lions made good on that early pressure. Midfielder Andrew Privett took advantage of a loose ball just outside the box, glanced towards the net, and fired a left-footed shot swiftly into the bottom corner for a 1-0 lead after just five minutes.

Maryland soon grew into the game, though, crafting out a couple opportunities shortly after Privett’s strike. Ben Bender got on the ball in central midfield with regularity, and found space for winger Paul Bin on the left. The senior cut inside, but saw his shot cannon off a Penn State defender.

Brayan Padilla followed with another chance a few minutes later, sending his volley high over the bar.

19 minutes into the half, it seemed Maryland made its breakthrough. Nick Richardson sent a long ball over the top, and Jacen Russell-Rowe gave chase. As the freshman forward darted into the box, he was dragged down — and the referee showed no hesitation in pointing to the spot.

Padilla stepped up to take the ensuing kick, but veered his shot a yard wide of the post.

“His best days are coming, he’s just gotta work some of the rust off,” Cirovski said.

The home side added another just moments later, with midfielder Peter Mangione finishing off a knock down after a dubious no-call seconds earlier.

Following the third, Cirovski shuffled his pack. He sat Bin, Padilla, Russell-Rowe and Gielen, bringing on a flurry of new faces.

And the changes worked.

The Terps saw more of the ball, orchestrating their play through Bender. And it was the freshman who played a part in giving Cirovski’s squad hope. He sent a long ball over the Nittany Lions’ back line, which Mike Heitzmann ran onto, before being tripped from behind for Maryland’s second penalty kick of the day.

This time, the Terps capitalized, with freshman midfielder Joe Suchecki coolly finding the bottom corner to make the score 3-1 a few minutes before the break.

“Our reaction was better when the third goal went in,” Bin said.

The score stayed that way until halftime, with Maryland going into the break with plenty of work to do.

Both teams came out of halftime with renewed energy. Bender skewed a shot wide. Seth Kuhn fired a free kick at Lowell. Daniel Bloyou floated a chip the wrong side of the post. Bin beat his man — but missed the top corner.

“Second half, I thought we were a different team,” Cirovski said.

And Penn State settled into the game. The Terps struggled to break down a compact Nittany Lions defense, creating precious few chances. Bin toiled, unable to find space on the wing.

But that would all soon change with one right-footed drive. Russell-Rowe picked up the ball 30 yards out from goal, shifted the ball to his right, and rifled a shot into the top corner.

For the last 15 minutes, Maryland pushed relentlessly. Bin saw an ambitious overhead kick thwarted. Di Rosa’s shot from outside the box fell right into the arms of goalkeeper Kris Shakes.

“We had two close calls in the second half, but the ball just didn’t quite get where we wanted it to,” Cirovski said.

But that was as close as the Terps would get. And as the final whistle blew, they were left to rue mistakes in the first half, as well as opportunities missed in the second.

Most of all, they simply gave Reedy too much space.

“I thought we could have tied this game or won it,” Cirovski said. “But you have to give Penn State credit. They jumped on us early, took a big lead, and got the result.”