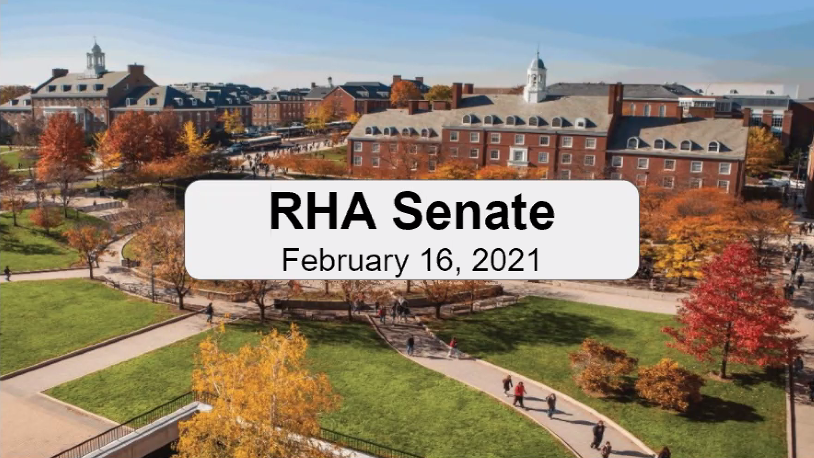 The University of Maryland RHA voted Tuesday night to pass resolutions in support of the university’s housing, dining and transportation fee proposals for the 2021-22 academic year.

The proposals, developed by the university’s Resident Life, Residential Facilities, Dining Services and Transportation Services departments, were all presented to committees within the Residence Hall Association earlier this month. These committees, along with other student advisory groups, are part of the first of five steps in the student fee review process.

Ultimately, all three resolutions on the proposals passed.

The housing fee resolution, written by Jason Spizuoco, a senator-at-large and junior aerospace engineering major, passed 12-2 with no abstentions.

Under the housing fee proposal, a double room in a traditional air-conditioned dorm would cost $8,072 for the next academic year. This marks $317 more — a 4.09 percent increase — from the current academic year.

[251 North has limited hours this semester. Here’s how students are adjusting.]

The discussion about the proposed housing fee increase was the longest the RHA has had on a resolution this academic year.

Senator Aiden Wechsler advocated against the housing fee proposal. He pointed out that the pandemic’s strain on the economy has left students and students’ parents unable to find work. Wechsler suggested delaying the fee increases until the economy is more stable.

“I agree that there is a need to increase the fees, somewhat, but I think my problem with this is how much we are increasing it by,” the freshman government and politics major said.

This fee proposal sets the base campus meal plan at $4,916 for the following academic year for an increase of $156 — 3.28 percent more than the current academic year.

Fleischmann, a freshman electrical engineering major, said the bulk of this increase stems from mandatory operating costs due to wage adjustments and increases in utility, maintenance and food prices.

The transportation fee resolution, presented by Transportation Advisory Committee chair Amanda Nwokoro, a freshman enrolled in letters and sciences, also passed unanimously. The fee goes toward salary and wage adjustments for Department of Transportation Services employees and increase in employment benefits and Facilities Management maintenance, among other necessities.

The proposed fee is $346 for commuter students and $669 for residential students, a $10 and a $19 increase, respectively.

Alec McCarren, RHA vice president and a senior economics and mathematics major, had voted against the transportation fee resolutions for the past three years because he said he did not believe DOTS has a sustainable funding model.

This year, he voted in favor because he sees that DOTS is improving, noting the minimal increase in fees for parking permits.

“The moves that they’ve made in the past year are generally good — and very good for student fees,” he said.

The next step of the student fee review process, which is not dependent on the RHA’s approval, is review by the Committee for the Review of Student Fees, the highest level of the process in which students are involved. RHA President Emily Berry is one of several students on this committee who provide input about the fee proposal.

The proposals will then go to this university’s presidential cabinet and President Darryll Pines. The Board of Regents will make the final decision.

CORRECTION: Due to a reporting error, a previous version of this article misstated that RHA senators wrote and presented the fee proposals. The fee proposals are developed by university departments. The RHA voted on resolutions to voice its approval of the university’s fee proposals. A previous version of this article also misstated that the RHA as a whole is a student advisory group for the fee review process. The student advisory groups that review these fees as the first step in the process are the RHA’s subcommittees on resident life and residential facilities, dining and transportation services. This story has been updated.