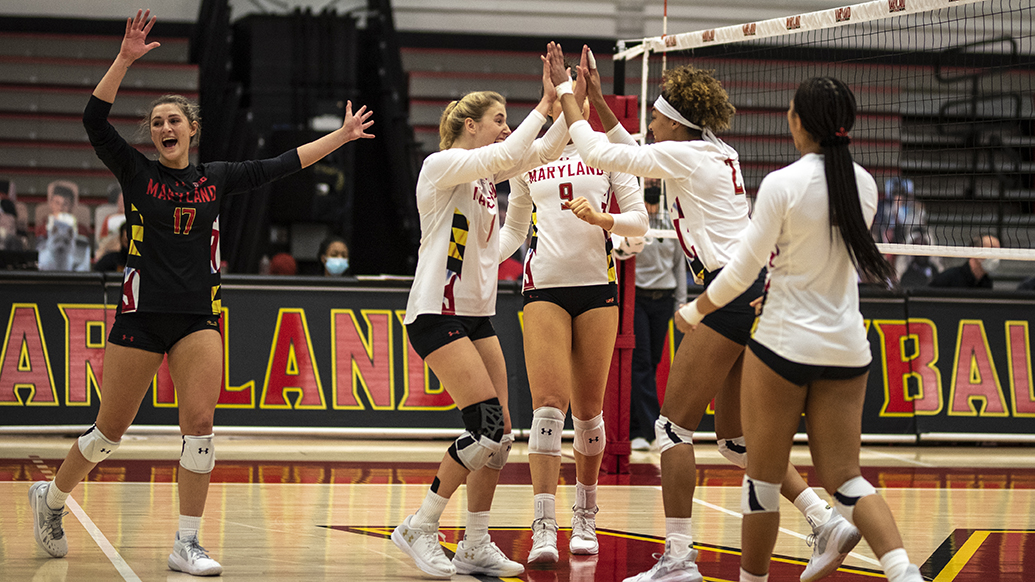 Maryland volleyball celebrates a point during its 3-0 loss to No. 7 Minnesota on Jan. 30, 2021, at the Xfinity Center Pavilion. (Eric Harkleroad/The Diamondback)

Following last Saturday’s 3-0 loss to No. 4 Nebraska, Maryland volleyball dropped to 0-6 on the season, still searching for its first victory of the truncated 2021 slate.

On Friday, the Terps will look to end their season-opening skid as they take on the winless Michigan State at home in College Park.

“We’ve had some good battles with them,” coach Adam Hughes said. “We’re expecting the same … We’re both good teams, we’re all just gonna battle for it.”

Hughes’ squad, who captured a come-from-behind victory against the Spartans last season, will try to emulate last season’s performance as it fights to pick up a win.

“Last year was the first time our program has ever beat Michigan State,” Hughes said. “One of the things we’ve been talking about is — for the top teams in the conference — we [have to] show that we can hang around long enough before we can beat them.”

The Spartans, led by coach Cathy George, have turned to their youth to provide a spark this season, specifically leaning on freshman Sarah Franklin to help shoulder the load on offense.

Franklin, the 6-foot-4 outside hitter, boasts a 3.43 kill per set average on the young season, good for seventh in the Big Ten. She also ranks second in the conference in kill attempts.

Given Franklin’s threat, Maryland has focused on staying consistent. It’s been a recurring struggle for the Terps all season.

In its first match against Nebraska, Maryland showed flashes of potential, earning its first set victory over the Cornhuskers since 2015. However, the Terps were unable to keep that momentum going, dropping six straight points to Nebraska en route to a 3-1 loss.

For Erika Pritchard, going toe-to-toe with Franklin and her squad will be a challenge. The two teams have engaged in intense, close contests each of the last few years.

When Maryland last faced Michigan State, Pritchard impressed. The senior outside hitter racked up 13 spikes and 14 digs to lead the Terps, who rallied from a set down to clinch a momentous victory over the Spartans last season.

“I feel like both teams will bring a lot of fight, and … every Big Ten match is a battle,” Pritchard said. “We just have to take a big punch and play hard together.”

With the prospect of taking its first win of the season looming large, Hughes’ team is remaining optimistic going into their bout with the Spartans, who lead the all-time series 11-1 against them.

“It’s a Big Ten matchup, a good, good program and someone we’re looking forward to [going] toe-to-toe with,” Hughes said.

[Maryland volleyball is determined to move past 0-6 start]