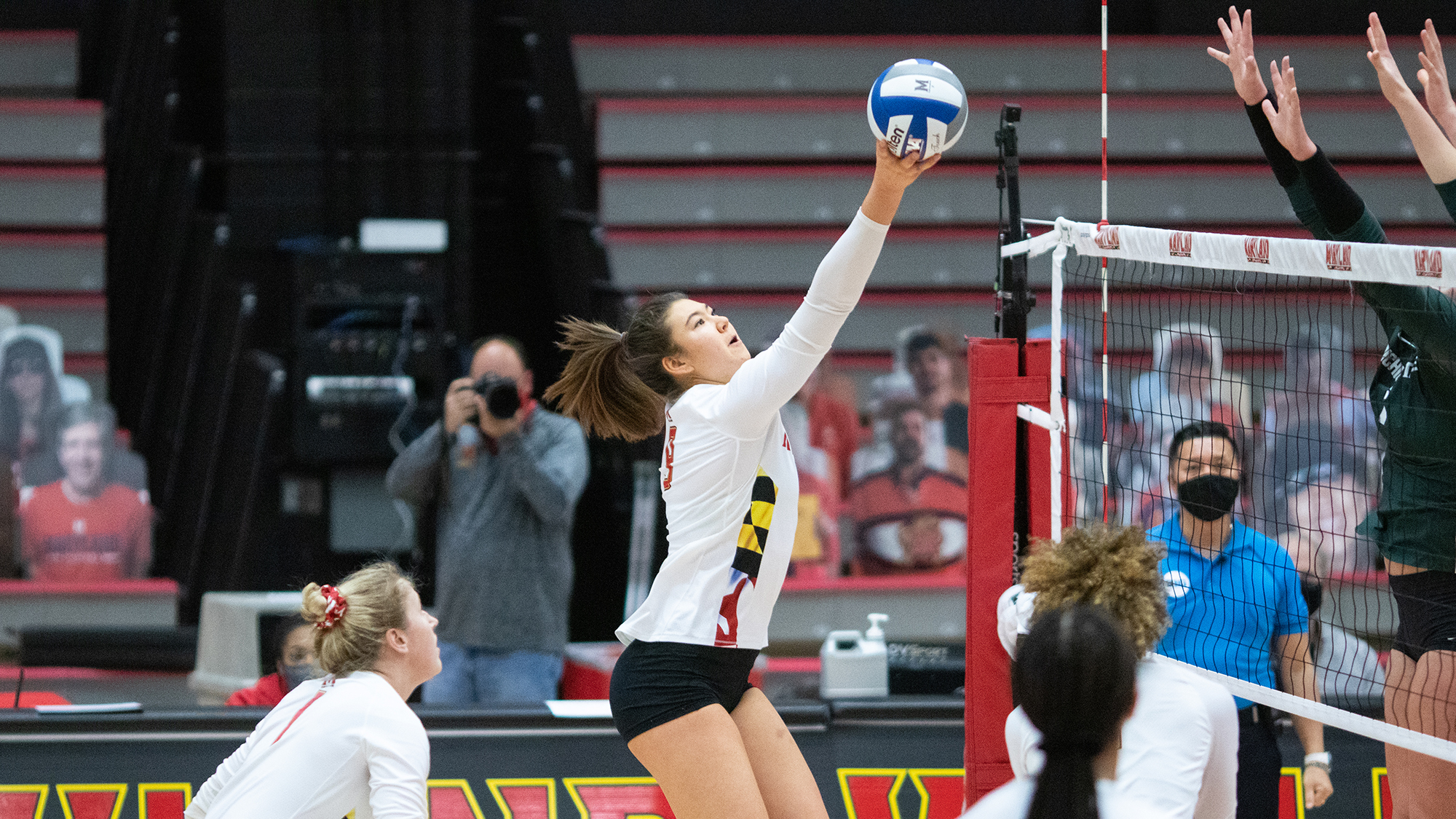 With the match hanging in the balance, middle blocker Rainelle Jones and setter Nicole Alford attempted to stifle a high-flying Sarah Franklin kill attempt, reaching over the net in hopes of extending the match to five sets.

However, Franklin wouldn’t be denied. Her spike careened through the hands of the Maryland volleyball defenders, spiraling towards the corner for a Michigan State point — and seemingly dashing the Terps’ hopes for a come-from-behind victory.

Maryland, coming off of two losses last week to No. 4 Nebraska, was plagued by miscues in its opening two sets against the Spartans. And despite a late rally, the Terps couldn’t overcome their slow start Friday evening, falling to Michigan State, 3-1 (25-20, 25-16, 21-25, 25-16).

“I thought we were flat from the get-go,” coach Adam Hughes said. “We weren’t firing on all cylinders and for a team that kind of relies on their defense, it was a poor defensive night for us.”

Maryland struggled off the opening serve, dropping the first five points of the match after three attack errors from outside hitter Erika Pritchard.

Pritchard soon regained form, however, chipping into her team’s early deficit with a blazing putaway followed immediately by a service ace.

Despite this flurry of offense, the Terps soon succumbed to the Spartans’ high energy attack in the first frame. Up by as many as eight points in the set, Michigan State’s Biamba Kabengele and Naya Gros took control, spiking home a combined 10 kills en route to a comfortable first set victory, 25-20.

Maryland’s sluggishness would reappear in set No. 2, with coach Adam Hughes’ squad once again falling behind early.

With Maryland trailing 7-2 in the second frame, a rogue kill attempt by Cara Lewis ignited the Michigan State bench, forcing Hughes to call a timeout to help regain his team’s composure.

And while Maryland showed signs of life out of the timeout, Michigan State’s offense was relentless.

Led by Franklin’s offensive output, the Spartans quickly widened their lead. The freshman notched six of her 16 spikes in the second frame, taking advantage of holes in Maryland’s back row.

And Michigan State cruised. Now up to 31 kills through two sets, outside hitter Alyssa Chronowski rounded off the Spartans’ dominant second set performance with a booming spike. The Terps had fallen once again, 25-16. And with Hughes’ squad struggling to find its rhythm, it made the long trek back to its locker room.

“I think the demeanor was, you know, everybody was kind of really fired up,” libero Sam Burgio said. “We weren’t playing our best, and we just wanted to give everything we had because we really have nothing to lose.”

So, Maryland once again found itself in a 2-0 hole to a Big Ten foe.

Seemingly devoid of ideas in the opening two frames, the Terps started to find their footing in the third.

Middle blocker Jada Gardner was the spark. The redshirt junior notched five spikes as Maryland raced out to its first set lead of the contest, 10-9. The Terps had finally started to convert on their once stagnant attack attempts to punch back at the Spartans.

“We were getting good passes, Nicole [Alford] was setting the ball well,” Gardner said. “I was just finding the open spots.”

And while Michigan State eventually overcame its third set lull and cut into Maryland’s advantage, the Terps would not be denied.

Back-to-back kills by Pritchard put a set victory within reach for Hughes’ squad. Then, Gardner and Lewis combined to swat an errant Chronowski spike attempt away. Maryland’s once-dormant bench went into a frenzy as the Terps snatched a momentous third game win, 25-21.

Now into a pivotal fourth set of action, Maryland looked to ride the wave of energy it garnered in the third frame. But, the Spartans had other plans.

Franklin racked up five kills in the set for Michigan State. And despite Gardner’s 20-kill, .455-hitting percentage exploits, the Spartans recaptured their earlier form just in time, taking the fourth and final set, 25-16.

“We gotta get back to work tonight,” Hughes said, “we’ve got another chance tomorrow against a good team, and you know, I tell the team all the time the response is what matters the most.”