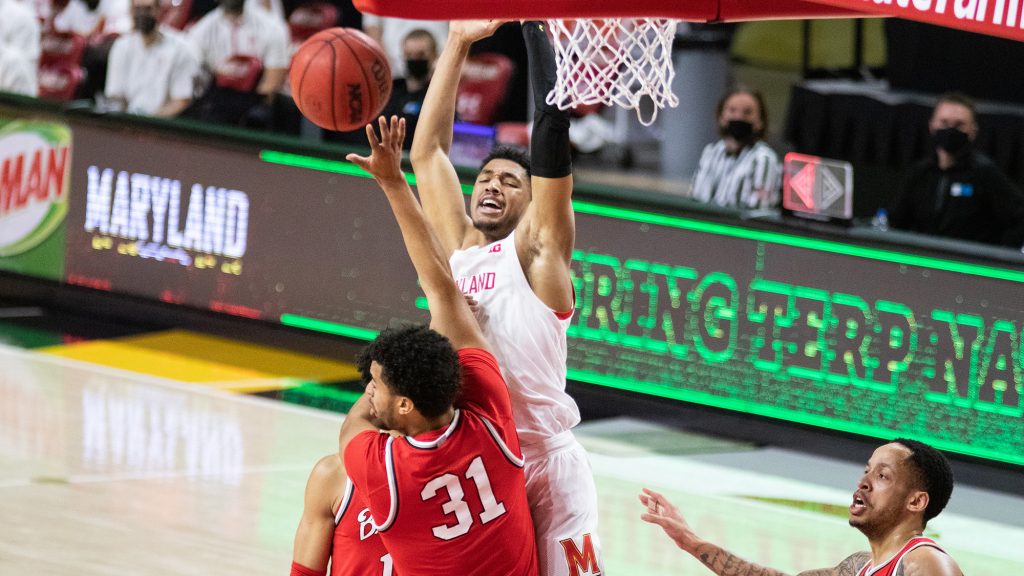 Aaron Wiggins fights for a rebound during Maryland men’s basketball’s 73-65 loss to No. 4 Ohio State on Feb. 8, 2021, at the Xfinity Center. (Julia Nikhinson/The Diamondback)

As the game slipped away, Darryl Morsell sat on the bench. Maryland men’s basketball’s deficit had grown to 13 just moments earlier, when a Kyle Young three sent No. 4 Ohio State’s bench into mayhem with a little over eight minutes left.

In the scrum that preceded Young’s three, Morsell caught an inadvertent elbow to the face from Jairus Hamilton. He slammed his face shield as he drifted to the sideline, blood beginning to pool just above his left eyebrow, and received a technical foul for his actions.

Morsell sat on the bench, pressing a scarlet-stained napkin to his wound once more and watching as Duane Washington hit a pair of technical free throws to push the Buckeyes’ lead to 15.

The Terps’ offense, once free-flowing and vibrant, has stagnated in conference play. Their defense, stout for much of the Big Ten slate, showed signs of wear and tear against Ohio State’s high-powered offense.

But, with its tournament hopes hanging by a thread, Maryland is determined to stop the rot. For coach Mark Turgeon, the growth has been evident in recent weeks. It’s just about stringing positive results together.

The Big Ten’s strength was on full display Monday evening. The Buckeyes quickly overcame their early wobbles to take control. Washington and Young were the standouts, routinely finding space for themselves inside and outside the arc.

The Terps’ defense struggled to contain Ohio State’s perimeter threat. And the triples just kept piling: The Buckeyes hit 10 threes, eight of which came in the first half.

“There was, I think three or four that we gave up that we probably shouldn’t have [given] up,” Turgeon said. “And they made all of them.”

Still, there were brief signs of optimism. Perpetually undersized, Maryland inched past the Buckeyes on the boards, 25-22. The Terps’ offense, noticeably absent against Penn State on Feb. 5, showed flickers of life.

Maryland found success driving into the paint in the early moments of the game, forcing Ohio State to adjust. Those adjustments, centered on locking down the interior, gave the Terps openings outside the arc. And while the buckets weren’t quite flowing Monday — Maryland shot just 40 percent from the field and 26.3 percent from three — the Terps are heartened by the quality of shots they were creating.

But on Friday, the Terps looked composed from the stripe. They knocked down 16 of their 18 attempts, keeping the game competitive even as the Buckeyes began to assert themselves.

“Coach Turgeon has been on the guys about making free throws,” guard Eric Ayala said after the game. “It showed tonight.”

They are small gains, admittedly. Maryland sits at .500, a gulf away from solidifying its dreams of March Madness. To date, only 24 teams have qualified for the NCAA tournament with a record that sat at .500 or worse, with none of those schools coming from a Power Five conference.

While the Terps have managed to pull off a handful of impressive road victories, their road to the tournament remains uncertain.

Still, bolstered with optimism, belief and a few marginal improvements, Maryland is hoping to make a late push as the season nears its conclusion.

“This team has got a lot of fight left in it, and we think we still got a chance to make a run here,” Turgeon said.