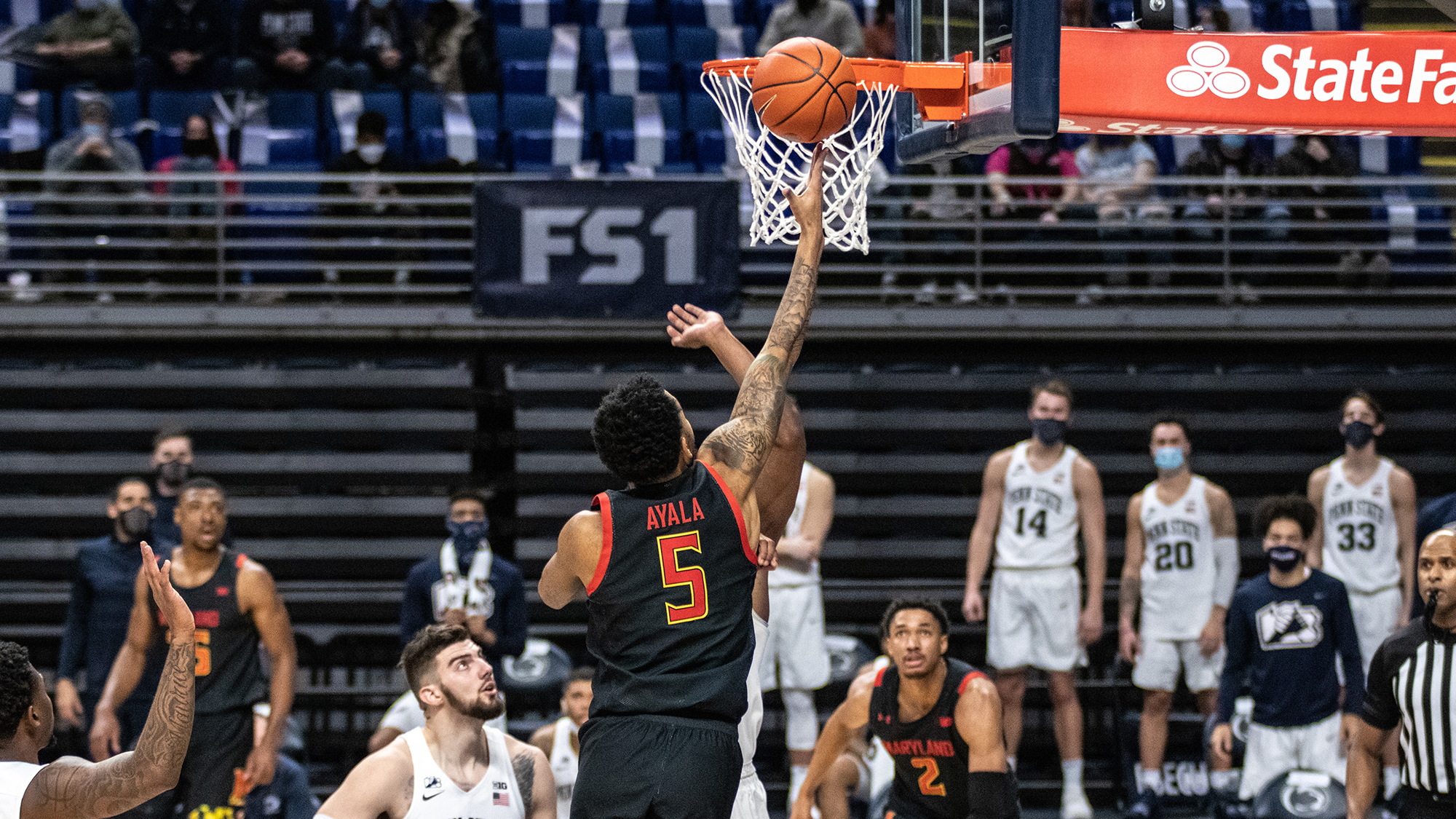 There could not have been an easier lane to the basket. Aaron Wiggins had forced a Penn State turnover, and he pushed the pace for a trailing Maryland men’s basketball squad in desperate need of a bucket.

Wiggins found Hart on the subsequent three-on-one, and it seemed certain he would cut the Terps’ deficit to one possession. But it didn’t fall.

Hart left the attempt short, part of the closing 7:32 in which Maryland did not make a field goal. It was a microcosm of the Terps’ offensive ineptitude Friday night in State College, Pennsylvania, ultimately dooming the team to a 55-50 loss to the Nittany Lions.

“When you get steals, you should get layups,” coach Mark Turgeon said. “But we missed them. Then who knows what happens.”

The ugliness started early, as Penn State’s Jamari Wheeler forced Galin Smith to lose the ball off the inbounds. Wheeler then drained a three to put the Nittany Lions up 5-2.

But the scoring would then shut down for much of the next 10 minutes, as shot after shot missed the mark and the teams combined for 16 turnovers in the opening frame — 11 of which belonged to Maryland (10-9, 4-8 Big Ten).

“Their pressure bothered us,” Turgeon said. “A lot of it’s their defense and our guys not being able to … catch the ball or get open going backdoor.”

A few makes wouldn’t spoil the defensive party, as neither side cracked 10 points until a Trent Buttrick dunk with 7:13 remaining in the first half gave Penn State (7-8, 4-7) an 11-9 lead.

That bucket ever so slightly opened the floodgates, with both squads combining to make five of their next seven shots. And the Terps took greater advantage, with Ayala shaking a defender to drain a three. It was part of a 12-0 run across nearly four minutes, as Ayala upped his point total to 10.

But then the shots stopped falling, and the Nittany Lions crept back. A 7-0 run to close the opening 20 minutes was punctuated by an Izaiah Brockington step back swish to tie the game at 23.

The scoring settled after the break, and the half reverted to a sluggish pace. Shots clanked, players traveled and the scoreboard barely budged. Despite a few strokes of life — dueling threes from Ayala and Wheeler, a pair of drives from Jairus Hamilton — neither Maryland nor Penn State crossed the 40-point plateau until nearly halfway through the frame.

“We didn’t really do a good job of being available for the ball,” guard Eric Ayala said. “We just gotta be ready to execute plays.”

The Nittany Lions reached that mark on two free throws from Buttrick. That became a problem for the Terps in the second half, who committed just two fouls in the opening period.

Penn State reached the double bonus with 9:04 to go, part of a 9-2 run to break open a tied contest that included several open misses from Maryland followed by whistles on the other end.

But the Terps hung around. Wiggins — who had been scoreless to that point — dropped a layup to stem the blue tide. A minute later, he misfired on a jumper, but Hakim Hart collected the rebound and put it back to cut the Maryland deficit to three.

Ayala then did his best to take charge, downing a layup and making free throws to bring the Terps within one. He then found himself wide open from deep but clanged it off the iron as the Nittany Lions barely stayed in front. Ayala eventually tied his career high with 23 points on the night.

“Eric was our go-to guy,” Turgeon said. “Eric really was the only guy we felt could make some shots, so we were trying to play through him.”

And despite a more than five-minute field goal drought, Penn State kept its lead thanks to a bevy of free throws. It went 16-of-18 from the charity stripe in the second half.

That was enough to keep a stagnant Maryland offense from closing the gap any further. The Terps missed several wide open looks, and a pair of Hart errors — first the clanked layup on the fastbreak, then a mishandled pass that fell harmlessly out-of-bounds — doomed Maryland to another underwhelming defeat, an all-too familiar feeling for the Terps at Bryce Jordan Center.

“Those were easy opportunities that I felt we should’ve scored on,” Darryl Morsell said. “I still got trust in my guys.”