“The Microwave”: Maryland men’s basketball is hard to stop when Aaron Wiggins heats up 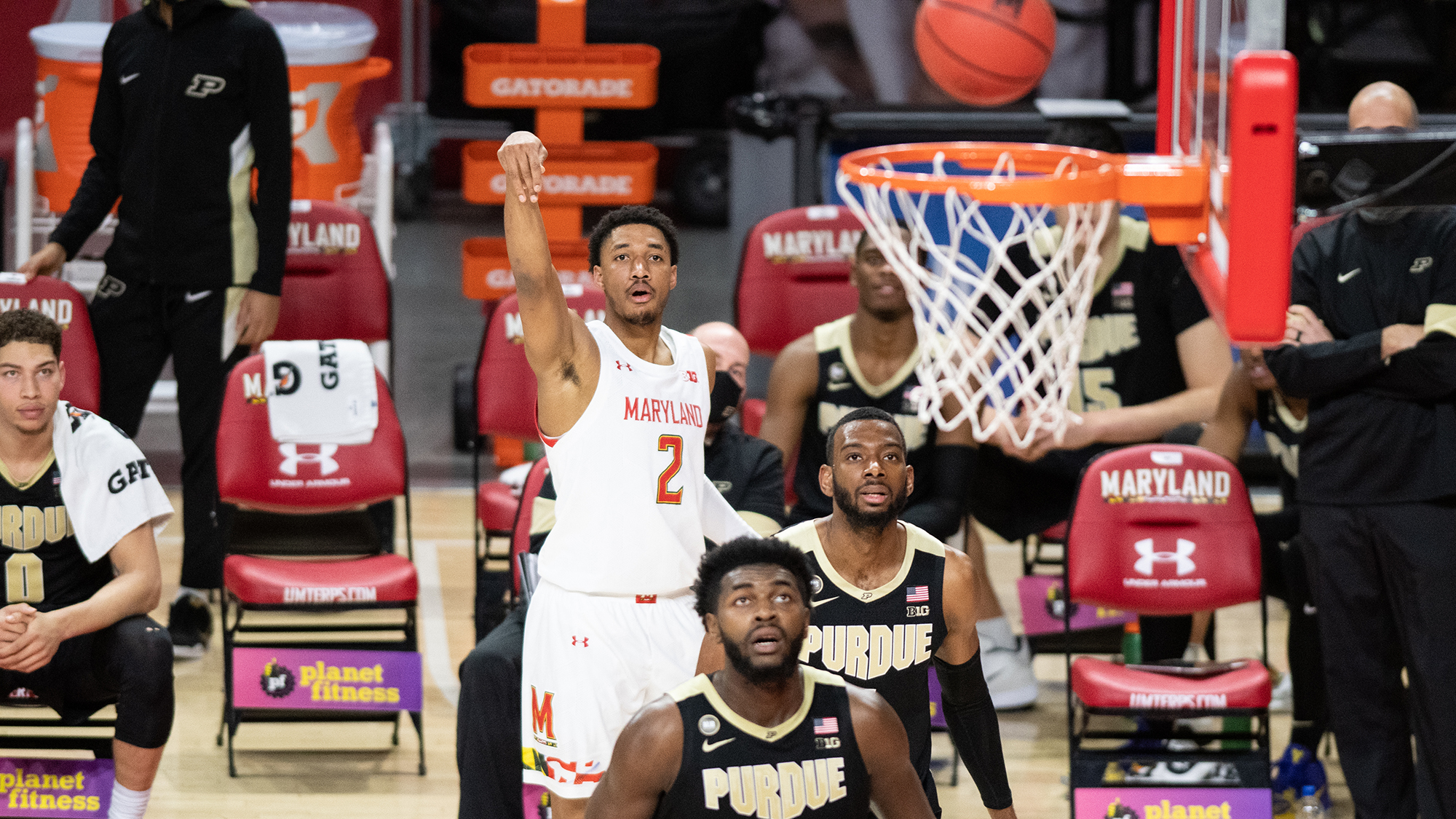 Aaron Wiggins curled around Galin Smith’s screen midway through the second half against Purdue, a sea of space opening up in front of him at the top of the key.

The junior guard reeled in a pass from Eric Ayala. Then, he rose, soaring past Eric Hunter Jr.’s outstretched grasp to let off a three. Swish.

Wiggins jogged back down the court, calm and collected. It was one of three triples Wiggins would make in the frame, part of an 18-point, 11-rebound display against the Boilermakers on Tuesday night.

Much has been said about Wiggins’ all-around development over the course of the season. Yet, at his essence, he remains a scorer. For a Terps side still searching for reliable offense, Wiggins’ offensive spurts have proven crucial.

“Aaron is literally the true definition of a microwave to me,” guard Darryl Morsell said. “Mid-range, three, anything. He’s really good. He’s talented.”

Wiggins has scored in double-digits in seven of his last eight games. Although the junior has added new wrinkles to his game — he’s second on the team in rebounds per game (5.4) and assists per game (2.8) — it’s that scoring touch that has propelled Maryland’s push toward postseason competition.

Wiggins scored 15 points against then-No. 6 Wisconsin on Dec. 28, helping the Terps to a momentous road upset.

His scoring slowed in Maryland’s next two Big Ten victories against then-No. 12 Illinois (12 points, 3-of-11 shooting) and then-No. 17 Minnesota (eight points, 3-of-8 shooting). Still, Wiggins was a threat. His presence on the perimeter requires constant surveillance, opening up cracks for his teammates to exploit.

“[He’s] just committed to the team,” Ayala said after the Minnesota game. “He’s willing to go out there and do whatever we need to help us win. He’s multidimensional, talented in so many different ways.”

For all of Wiggins’ skill, though, Maryland’s tournament hopes appeared to be dwindling. He was lively in the final frame of the Terps’ rematch with Wisconsin on Jan. 27, dropping 18 points. But poor shooting and costly turnovers scuppered the late Terps rally.

Coach Mark Turgeon’s squad was in desperate need of a victory.

So, Wiggins headed to the gym. He found the net time and time again, confidence growing with each make.

“When you work, you see results,” Wiggins said.

And on Tuesday, with Maryland locked in battle with an upstart Purdue side, Wiggins delivered. He was fairly quiet in the opening 20 minutes of the game, notching just five points on 2-of-7 shooting.

But in the second, he was a force. He went to work early, cashing a jumper from inside the arc 48 seconds into the frame. That was all he needed.

“If Aaron makes one shot … find him,” Morsell said. “That next one is going up, and it’s going in.”

Wiggins poured in 11 points in the next 10 minutes, few as vital as the triple he hit to put Maryland up one with 12 minutes left.

As the Terps walked off the court Tuesday evening, Wiggins’ contributions were clear. He’s filled many different roles for Maryland this season. He’s starred as a playmaker in some games and as a bruising rebounder in others.

But above all else, Wiggins can fill it up. And for that, Maryland is grateful.

“He know how big of a game this is,” Morsell said after the game. “He dream of being in moments like this. He just embraced it.”